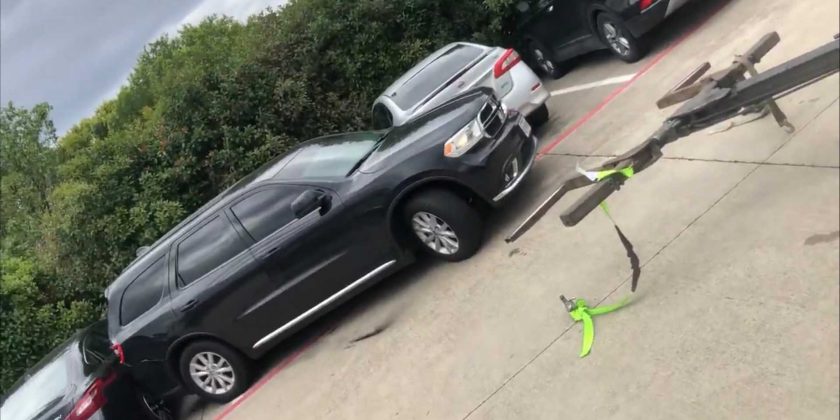 The last thing anyone wants is to see their vehicle repossessed. For many, it’s a necessary lifeline for employment and education, but when the bill comes due, someone has to pay up, and repossession companies are often at the forefront of that effort. They see crazy antics all the time from people trying to keep their cars, though a new video posted to Reddit shows just how far one woman would go to keep her Dodge Durango.

The video begins mid-repossession, with the tow truck driver already having the SUV’s front wheels up off of the ground. The driver is in the car trying to reverse off the underlift, the back tires already spinning. After a few unsuccessful seconds of trying to free the Durango, the woman gets out to inspect her predicament, only to return to the driver’s seat to try again. The strap around the passenger wheel is keeping it in place until the Durango finds enough traction to pull itself free of it.

However, the SUV’s extraction isn’t without consequence. The Durango reverses into two parked cars as it lurches off the lift, damaging each. The driver then shifts the Durango into Drive, clipping the underlift with her front bumper as she speeds away. The Durango backed into a Nissan Sentra and a Nissan Altima, clearly damaging the Sentra’s rear bumper.

It’s unclear what the woman was trying to accomplish. Her actions were clearly caught on camera, providing police with plenty of potential evidence. It also appears the repossession was taking place at the woman’s place of employment, so it shouldn’t be too difficult for the repossession company and police to track her down. Not only will the company still take her Durango, but she could also see police charge her for hitting the two parked cars and fleeing the scene. She turned a headache into a migraine.