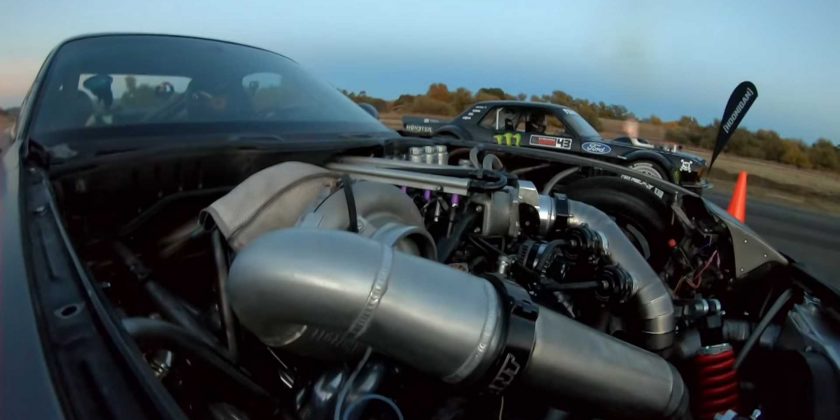 Ken Block and Rob Dahm put on the craziest Hoonicorn Vs The World drag race we’ve seen yet.

If you’ve been following the Hoonigan YouTube channel, you know Ken Block has been busy racing his insane Hoonicorn Mustang against, well, pretty much everything. The theme of this recent series is Hoonicorn vs The World, where the 1,400-horsepower all-wheel-drive Mustang battles a menagerie of performance cars from stock hypercars to crazy Pikes Peaks racers.

Thus far, Block and his Mustang are undefeated, but the latest race features something arguably crazier than the Hoonicorn. Rotary fans undoubtedly know all about Rob Dahm and his quest for RX-7 glory. He has a four-rotor RX-7 with massive boost, a massive wheelbase, and yes, an all-wheel-drive setup. It’s actually an homage to the Hoonicorn, as Dahm was so impressed with what he saw in Gymkhana 7 that he set out to build a crazy RX-7 in the same manner. As such, the car is stretched upwards of six inches, and like the Hoonicorn, it’s modified to the point where virtually none of the parts are from an original RX-7.

We have the video above for you to enjoy, and we’re actually watching it right now as well. We can tell you this much – there is carnage, excessive rotary noise, wildly excessive speed, and considerable tire slayage. Is the Hoonicorn’s reign as a straight-line speed king at an end? Grab your popcorn and enjoy the 21-minute show while we get our heads around this crazy contest.