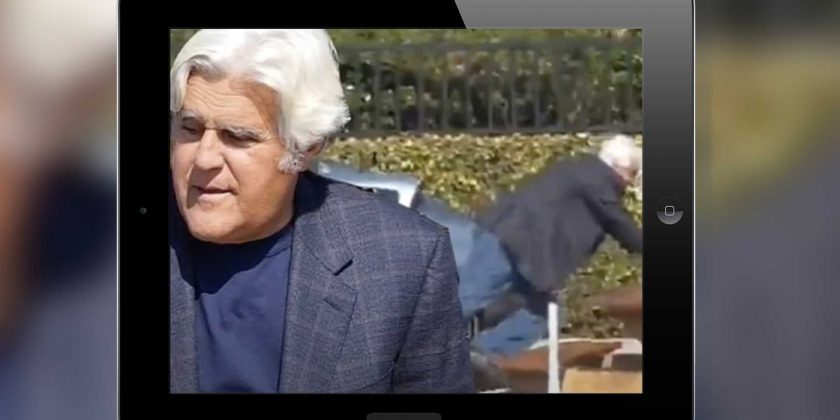 Leno was filming with ’80s rock icon Rick Springfield when the near-miss occurred.

Everyone knows Jay Leno is a massive petrolhead and devotee to all things automotive. That passion was displayed recently in a surprising way when the 70-year-old comedian stepped in front of a driverless Lexus IS300 rolling towards a gorgeous 1963 Chevrolet Corvette restomod, thus preventing a low-speed collision. Is it really that surprising though? More on this in a bit.

In a video shown by The Daily Mail, the customized Lexus creeps forward after a guy wearing a white shirt forgets to put it in park. The two cars aren’t separated by much space, but Leno immediately steps in front and casually puts his hands on the hood, bringing it to a stop. The guy in the white shirt jumps to action, reaching through the IS300’s open window to engage park. Fortunately, the car was rolling very slowly and from what we can see, there was little danger to Leno. Frankly, we can’t imagine any proper car enthusiast not doing the exact same thing.

The video isn’t embeddable, but you can see the whole saga play out here.

If you haven’t already figured it out, the guy in the white shirt is actually ’80s rock star Rick Springfield. According to The Daily Mail the pair were filming in Malibu, California for an upcoming episode of Jay Leno’s Garage. Here’s where the surprise comes in. The blue Corvette isn’t Leno’s car. That’s Springfield’s pride-and-joy, meaning Leno was there in the curious two-tone Lexus. We couldn’t dig up any info on it – perhaps it was a recent acquisition or something used specifically for this segment. It certainly doesn’t seem to fit Leno’s style.

In any case, both men and their machines survived the day unscathed. As for the rest of the story, that will likely be told in a future episode of Jay Leno’s Garage.