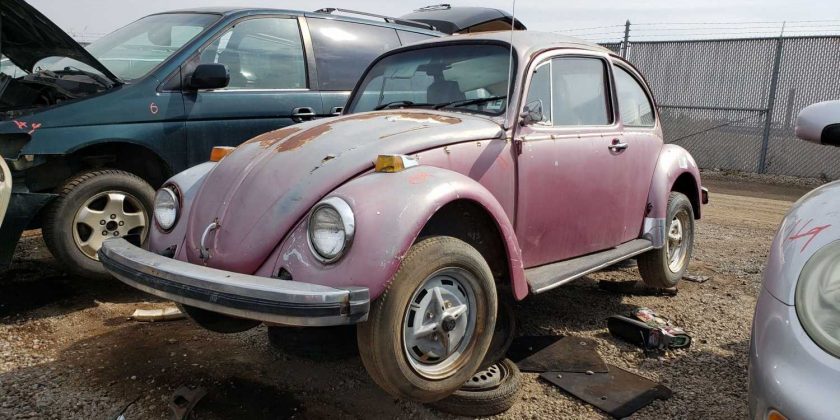 It took Volkswagen quite a while to develop modern water-cooled cars. But the doomsday clock started ticking for the incredibly antiquated air-cooled Beetle once the Dasher (Passat) showed up on our shores starting in 1974, followed by the Rabbit (Golf) the next year. Still, Americans could buy the good old Type 1 Beetle sedan all the way through 1976 (convertible sales continued through the 1979 model year), and one of these automotive icons just showed up in a Denver self-service yard.

By the middle 1970s, there was no way the early-1930s-technology air-cooled Volkswagen engine could be made to meet American tailpipe-emissions standards with a carburetor, so VW bit the bullet and installed the modern Bosch L-Jetronic fuel-injection system on Beetles starting in 1975. This resulted in a 48-horsepower engine and a sticker price of $3,499 (about $16,300 in 2020 dollars). This was $501 more than the far more sophisticated (and much safer) Fiat 128 and $948 more than the Chevrolet Chevette (which was primitive but had a heater that could keep you warm).

This car looks solid by the standards of junkyard Type 1 Beetles, with very little rust and a serviceable interior. Perhaps everybody who wants an air-cooled Beetle already has one (or a half-dozen) by now, or it might be that air-cooled VW aficionados prefer the Beetles of the 1950s and 1960s. In any case, nobody rescued it on its journey to the grave, and here it sits.

The luck of the junkyard put this old Beetle next to its water-cooled successor, with the Rocky Mountains visible in the background. The size difference isn’t as striking as the one between the Old Mini and New Mini, but it’s significant.