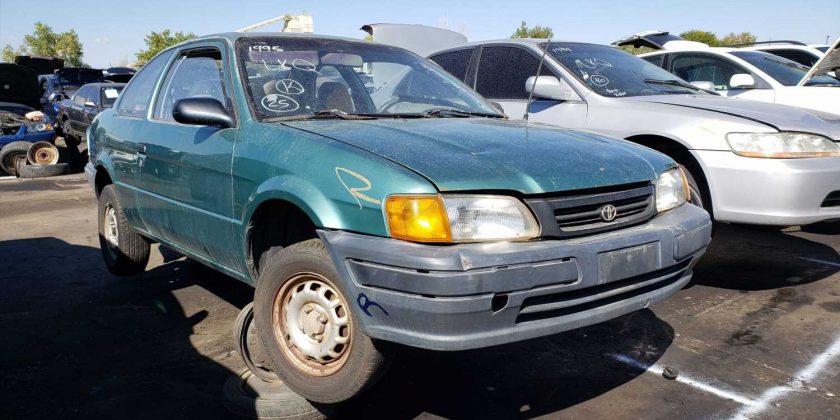 Recently, we learned that the very last new car sold in North America with the storied four-on-the-floor manual transmission was the 1996 Toyota Tercel. For the 1994 through 1996 model years, the Tercel was your only choice for a new car with a four-speed manual, and I’ve managed to find one of those extremely rare cars during my junkyard explorations. Here’s a zero-option ’95 in a Denver-area yard.

Air conditioning was a 900-buck option on the ’95 Tercel, and you can see the socket where the AC button would have lived in the photo above. That factory-looking CD player seems like an incongruous squandering in such a penny-pinching car, but it turns out to be the no-doubt-junkyard-sourced original head unit from an early-2000s Nissan Altima. Buyers of the base-grade 1995 Tercel had no CD-player option (you had to move up to the Tercel DX for that), but they could splash out a big $450 for a four-speaker AM/FM/cassette system if they’d lost their presence of mind at the dealership. You got no standard radio whatsoever in the base Tercel; if you wanted music on a tight Tercel budget, you had to sing it yourself.

The 1.5-liter (actually more like 1.45-liter) straight-four in this car made 93 horsepower, and these cars weren’t any fun at all with automatic transmissions. With a manual, even the lowly four-speed, you could squeeze a tiny bit of driving enjoyment out of the later Tercels.