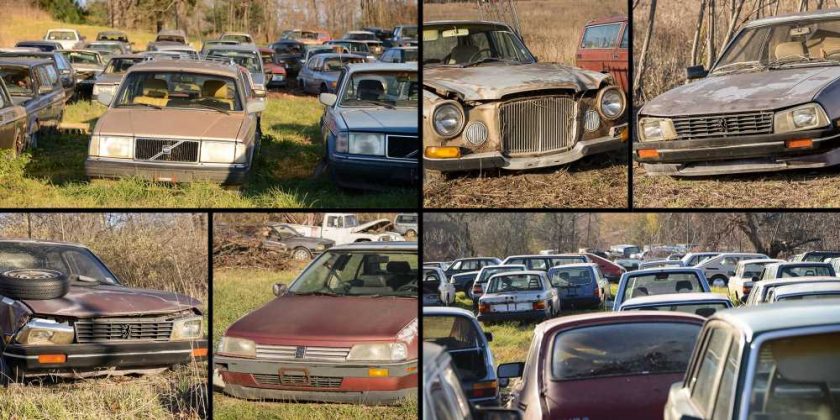 What would Halloween be without submersing yourself in some spooky places? A haunted forest, perhaps, or maybe midnight meandering through a corn maze? How about a crawl through a graveyard filled with the skeletons, carcasses and hulks of … automotive marques no longer present in the U.S? Mwahahaha!

There are junkyards and there are graveyards, and this is a graveyard serving as a gallery of automotive hubris, specifically of the European kind. If you’re wondering where all of the Renault Le cars ended up after the Renault-AMC alliance imploded, the answer is “here.” If you’re wondering where all the Peugeot 405 sedans and station wagons went after Peugeot left the U.S. in 1991, the answer is “this graveyard.” But it also holds examples of cars which are still on our roads, like Volvo 240s, which could still be reanimated using parts from different cars, like Dr. Frankenstein’s monster.

Let’s see the rarities inside this graveyard.

The Peugeot 405 was sold in the U.S. for a very short period of time, finding few buyers despite its Pininfarina styling, quick reflexes and a genuinely nice interior. Besides other issues, a high price made it a tough sell during a surge in the popularity of Japanese models at the time. Just a few thousand sedans were sold, and only about a thousand wagons.

The Peugeot 505 got the French marque through the 1980s, but it also turned it into a one-car brand in the U.S. When its successor landed it couldn’t replicate its sales, and the 405 was simply in a different, smaller segment. Once Peugeot left the U.S. in 1991, service for these became tough to find.

The Volvo 164 was once the top offering from the Swedish marque, and like most of the 140 and 240 series cars, there were plenty of these on the road after the model was discontinued. But after a certain point even these tanks faded.

The Peugeot 505 sedan offered lively handling and efficient engines, but few of these outlived the 1990s even in pockets where Peugeot service could still be found. The automaker kept an office in New Jersey for years after Peugeot left the U.S., but the population of 505s in the U.S. is quite small now, numbering in the hundreds.

There are still plenty of Beetles around, and plenty of first-gen Golfs, but what did Wolfsburg sell in between those two eras? The Type 4 cars are rare even in Volkswagen circles these days.

Peugeot was known for its spacious station wagons, which made a Jeep Cherokee look almost cramped by comparison, but Peugeot gave up considerable ground to Volvo at the end of the 1980s and early 1990s as the Swedish marque offered the 200, 700, 800 and 900 series cars almost at the same time.

The 265 was the top version of the Volvo 200 series wagons, and at first they were offered with quad round headlights. But these V6-engined wagons were not available during the entire production run of the 240, and they’re quite rare now even in Volvo circles.

The Alfa Romeo Spider carried the marque almost single-handedly for years in the U.S., but after several facelifts, the model had run its course. Not even the 164 sedan could save Alfa sales in the U.S., with dealerships closing up in 1995.

For a time in the 1980s Peugeot offered the 505 in diesel form, in addition to the 504 and 604 diesels. But the need for diesels faded quite fast, so those powerplants were not offered on the 505 in later years.

Saab’s foray into executive cars met with mixed success in the states. But mostly what Saab owners wanted were new models. The 9000 stayed on sale for quite some time, mostly going up against Volvo and BMW sedans, but it was always an offbeat choice.

Volkswagen certainly went though some reliability issues in the late 1980s and early 1990s, and the result is that its cars from this era are not easy to spot on the street today. When was the last time you saw a Jetta of this generation in traffic?

The interior of this 405 sedan looks surprisingly tidy, not even blasted by the sun all that much. Just a few thousand examples of the 405 sedan were sold in the U.S., and only about a thousand station wagons before Peugeot left the U.S. market.

Alfa Romeo didn’t always count on just the Spider to carry the sales targets of the Italian automakers. However, Alfa’s sedans never quite had the staying power that the Spider did, which is why just about any of the sedan models from the 1990s and prior are difficult to find.

Remember the BMW Bavaria? That’s what BMW’s large sedan was called in the U.S. for a time, before the arrival of the E23-generation 7-Series. The Bavaria was not really collected, and few of them seemed to survive even into the 1980s. Big BMW sedans had rarely drawn collector interest, but now some enthusiasts are restoring Bavarias, at least the ones that were well kept.

The AMC Renault alliance gave us the Alliance, but the smallest car of the range was the Encore hatch, available in three- and five-door form. These days the Encore is the rarest of that entire lineup, but the GTA cabrio is the most plentiful, despite the fact that it was the most exclusive at the time. If you’re itching for an Encore hatch (because why wouldn’t you be?), they’re not easy to find.

The Volvo 164 was styled quite differently from the other 140 cars, and being the pricier examples they were never really commonplace even back when they were new. It’s pretty easy to spot a late 240 on the street today, but the same is not true for the 140/160 range.

Saab had a hit on its hands with the 900, but it never managed to offer much variety in its model range, leaving the station wagon market almost entirely to Volvo. The marque has a strong following in the northeast and examples of the 900 are not that hard to find, but minty turbo models are certainly getting pricey.

The earliest examples of the 240 wore single round sealed beam headlights, thanks to DOT regulations of the time. These early wagons are not easy to find these days, even in Volvo circles. This is the Volvo version seen in Beetlejuice, in fact, though the Maitlands drove a light yellow one.

Just how many Peugeot 505s does this graveyard have? A couple of dozen that we could see, in all trims, bodystyles and states of preservation. Some even looked like they could be made to run with a couple of days’ work. But the sun was setting quickly and Dr. Frankenstein was running late. Soon, the graveyard would be enveloped in darkness and the sound of creaking doors.

A British car in this mostly-French graveyard? That’s right: a lone Triumph was among the dead hulks of Peugeots and Renaults. And its glass was the most intact exterior pieces in sight. In fact, it seemed like the car retired to the graveyard with relatively modest mileage, which should not be a surprise, we suppose. Quite a few of these cars did not hit the 100,000-mile mark.

That’s right: This is one of those “famed” Peugeot 405 wagons, just around a thousand of which were sold in total in the U.S. Certainly smaller than 505 wagons, the 405 never quite found its footing in the U.S., and it didn’t help that the 405 was pricey, landing in the midst of a recession in the U.S. You had to be a true fan of the marque to spend money on these between 1989 and 1991, and these days there are only about a dozen running examples of the 405 wagon in the U.S. We’ve seen a grand total of two in recent years, not counting dead ones of course. This graveyard had at least two 405 wagons.

The Volvo 700 series seemed very sturdy back in the day, but by the mid 2000s these seemed to fade from the roads. Was it the engines, or everything else in these cars that gave up? Today, the 240 series cars seems to have slight edge over the 700 series cars still on the road.

When was the last time you saw a Volvo 145 wagon on the road? These are rare even among Volvo enthusiasts, and just about the only examples we’ve seen in running state were examples restored to concours condition. But we have to believe there could be some rough but daily-driven examples on the west coast, in places like the Bay Area.

What would a graveyard of European cars be without a Renault Le Car? These were seemingly everywhere for a few years, and then they abruptly disappeared. As Renault entered into an alliance with AMC, the Le Cars were replaced by Alliance and Encore models now made in Kenosha, Wisconsin, which sold in ever greater numbers but also quickly vanished by the early 1990s.

The cosmetic condition of this Audi suggested that it had retired to the graveyard while being in relatively good shape, but it takes a lot to get an old Audi going—that much is certain. Somehow, these just did not seem to last, and by the late 1990s most of them already seemed to be in enthusiast hands.

The BMW 6-Series is a collector car today, but there are hardly any rough examples out there still being driven. All the examples we see are pretty close to club concours condition or higher. Rough examples retired to graveyards a long time ago.

Volvo was never known for sporty models, but the 242 GT, despite the two-door model’s short run, had its share of fans. These are quite valued in Volvo collector circles these days, as are regular 242s, but the jury is out on whether this example is salvageable.

A VW Bus found its way into this graveyard as well, but despite its advanced age it did not appear to have deteriorated as much as some more recent cars. But would a restoration be worthwhile?

One of the least dead Peugeots in this graveyard was this 505 wagon. Pretty much all are in collector hands now, but there are still a few old examples we see being driven daily. This particular 505 looked pretty tidy, and perhaps could be put back on the road.