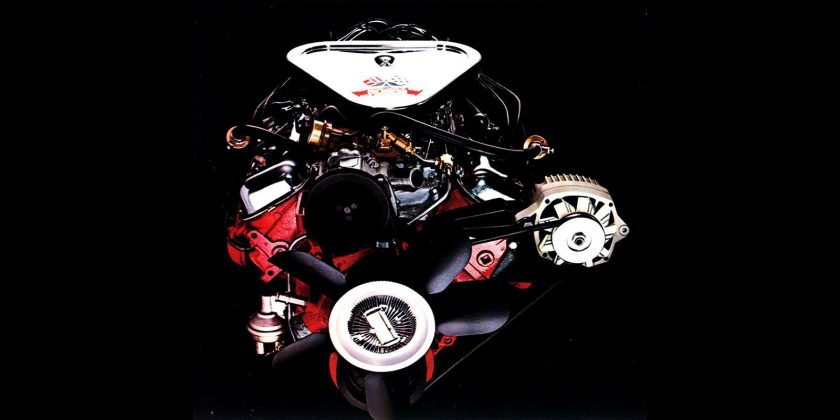 Note: Because many of you know chapter and verse of the tiniest details pertaining to Detroit V8s of the 1955-1979 period, I am including many endnotes to assuage some of your rage at my having overlooked very important details (such omissions due, no doubt, to some combination of my incompetence, malevolence, bias and/or a sinister hidden agenda). Please jump to the notes before your blood pressure causes a blown brain gasket.

From the middle 1950s and nearly into the 1980s, American car manufacturers built a stunning variety of overhead-valve V8 engines for passenger cars. From the tiny 221-cubic-inch (3.6-liter) Ford Windsor all the way up to the mighty 500-cubic-inch (8.2-liter) Cadillac, the era that began with the small-block Chevrolet and ended with the “Chevymobile” scandal of the late 1970s could rightly be dubbed The Golden Age of the American V8.* Why, in 1966 alone, American car shoppers could choose between 15 unrelated V8 engine families from GM, Chrysler, Ford and AMC (sorry, Studebaker fans, those final Canadian-market cars got Chevy 283s that year).** Out of all those rumbling, thirsty V8s, the available-in-a-regular-production-car V8*** that had the highest claimed horsepower rating of them all—in other words, The King of the V8s—was the LS6 454-cubic-inch big-block Chevrolet V8 in the 1970 model year, rated at 450 hp and installed in (hardly any) Chevelles.

That 454 was a member of the engine family known by racy types as the Rat Motors, so called because the small-block Chevy V8s were known among the same gasoline-scented folks as the Mouse Motors. Descended from the W-series engines of early-1960s “she’s real fine, my 409” fame, the car Rat came in 396-, 402-, 427 and 454-cubic-inch sizes**** (that’s 6.4, 6.6, 7.0 and 7.4 liters, respectively, for those of you suffering under the cruel lash of the unholy metric system… now tell me how many chopines go into a demiard). In my opinion, the greatness of these engines should be measured by output per unit of displacement, not total output, which means the 425-horse L78 396 in the 1965 Corvette***** beats all the other Rats with its 1.07 hp-per-cubic-inch.******

I’m really not all that interested in the kind of car that sells for seven figures at the big auctions, though, so let’s talk about the Chevy Rat that fascinates me the most as a student of all things Malaise Era (in fact, I gave the Malaise Era its name in the first place). That engine is, of course, the big-block Chevy**** that made the lowest horsepower per cubic inch: the 454-cubic-inch LS4 available (as an option) in the 1975 Chevelles and full-size Chevrolets. It depresses me to inform you that that engine had a factory rating of 215 hp, for a hp-per-cube figure of 0.47. Granted, that engine crushes the 197-hp 460 in the 1977 Ford LTD (would you believe 0.43 hp/cid?), but ouch. 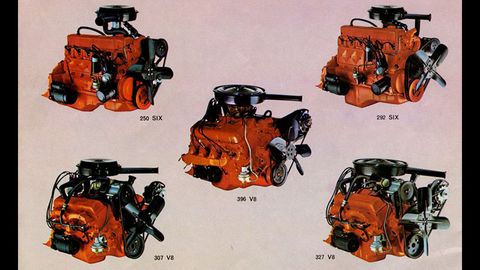 Keep in mind that the switch from gross to net horsepower ratings in the early 1970s makes comparisons between power numbers of the late 1960s and those of the middle 1970s somewhat less meaningful, plus the Detroit car companies were not above fudging power numbers one way or the other prior to the 1970s, depending on the needs of the moment. Also keep in mind that the power levels of modern engines annihilate the power levels (at the wheels or otherwise) of the Golden Age of the V8 engines. Just for one somewhat shocking example, the direct descendant of the jaw-droppingly-powerful-for-its-time LS6-equipped 1970 Chevelle SS 454, the 2020 Chevrolet Malibu, gets 2.05 hp per cubic inch out its 2.0-liter, 250-hp Ecotec four-banger. We don’t even need to get into what 2020 V8s can do, do we? 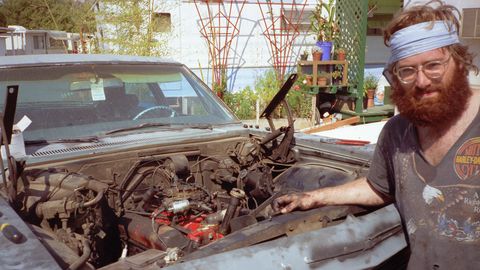 That said, I spent my teenage years yearning for a car with a Chevy Rat engine, but such a thing was well out of my price range (in the early-to-middle-1980s, any halfway desirable big-block would be yanked out of junkyard vehicles so fast that it would turn reddish due to speed-of-light Doppler shift). I was able to move up from the pushrod 3R engine in my ’69 Toyota Corona sedan to a hopped-up Type 3 1776 in a ludicrously hazardous ’58 Beetle and then to a Pontiac 400 in the world’s hooptiest ’67 GTO, and then to any number of Detroit V8 machines after that, but I never have owned a car with a real Rat under the hood. The closest I came to Rat ownership was the week in the summer of 1990 when I had the money saved to buy a 454 long-block assembly for my 1965 Impala sedan and was just about to pull the trigger… when I got the news that Saddam had invaded Kuwait. Expecting gas prices to spike to $25 a gallon, I bought the (somewhat) less thirsty 350 small-block and swapped it in place of the Impala’s oil-burning 283. We’ll return to that story later.

*Yes, the very first overhead-valve Detroit V8 in a production car was the 288-cube D-Series, installed in 1917 and 1918 Chevrolets. And yes, many other V8s came out of Detroit between that time and 1955. My definition of the Golden Age of the American V8 will differ from yours.

**The Studebaker V8 was a fine engine, but I chose 1966 as my cutoff year so I could count the Ford MEL and the Buick Nailhead. And of course, Packard aficionados, your V8s were good as well.

***Claimed factory ratings for production street cars only, not one-offs built using parts smuggled into dealerships by engineers or NASCAR crew chiefs, not race cars, not built-in-a-shed cars with Italian Formula 1 V8s, not the LS7, not the allegedly higher-horsepower 455 in the ’70 Buick GSX Stage 1, not any of 9,000 other edge-case oddball cars you know about. No, no, no! I’m only imagining the nitpicking on this one and it’s driving me crazy already.

****All right, dammit, I know about the boat-anchor 366 big-block engine, which was a miserable truck-only plant with a redline of about 1,900 rpm. We’re talking car engines here, not truck engines. Cars! Besides, I know a guy who swapped one into a horrible ’68 Biscayne and the result sucked.

*****Don’t even get me started about the underrated later L78s and, yes, I know that cooperative dealerships would install any engine you wanted into any new car if you paid enough (so there’s sure to be, God help us, a supposedly factory-built L78 Chevelle 300 Deluxe station wagon out there. That doesn’t count, in my book).

******The extremely nervous L79 327-cubic-inch small-block of 1965-1968 and its 350-hp rating almost beats the L78 big-block in the power-per-cube department, 1.070 to 1.073 horse/cube. And yes, the loony-tunes 302 small-block made way more power than its official rating, but this is not the place to get into discussion of nutso factory small-blocks of the 1960s (I just wanted to mention the near-identical power/displacement ratings of the L78 and L79, out of sheer geekery). Another time, perhaps.