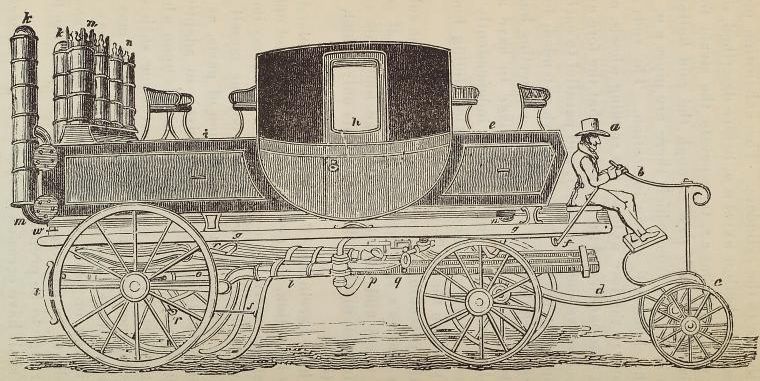 What was the first company formed to build a car?

Even if you don’t know off the top of your head, you’d think the answer would be more or less forthcoming. At the very least, you can probably guess the decade—the 1880s seems likely. That’s when the Benz Patent-Motorwagen was introduced, after all.

But if you look beyond gasoline-powered internal combustion and start dabbling in, say, steam, the timeline gets pushed back decades. Steam wagons were plying roads in France in the 1870s, for example. Was a company formed to build such a contraption not, arguably, a car company?

As with so many historical rabbit holes, the further you dig, the stranger, and more intriguing, things get—and the further back in time you have to travel to get a sense of where it all started. What I found when I started exploring the early history of the car will, if nothing else, make for great trivia for those post London-to-Brighton (or Lansing-to-Dearborn) Run drinking sessions.

First, what do we mean by car?

This can be a trite tactic, but to set the ground rules here, I’m going to turn to the dictionary: Merriam-Webster defines an “automobile” as “a usually four-wheeled automotive”—that is to say, self-propelled—“vehicle defined for passenger transportation.”

The power source isn’t particularly important here; it could be internal combustion, electricity, steam or even (if you want to get really fanciful) clockwork or something. But that last component of the definition, the intention of passenger transportation, is a complicating factor when we’re trying to determine who built the first car—let alone who started the first car company.

For example, a popular left-field choice for the first automobile is Nicolas-Joseph Cugnot, whose 1769 steam wagon at first glance meets—however nominally—almost all of the basic criteria for something we’d classify as an automobile: It was self-propelled, derived its propulsion from some mechanical means (weird contraptions like the horse-powered Cyclopede means this is an important distinction to make), was at least theoretically steerable and operated independently of rails. Here’s a replica in action:

I’m not entirely unsympathetic to this argument, but Cugnot’s wagon was designed to drag artillery, not haul people; that its operators could ride on it as it crept along at a snail’s pace was incidental. It was not, then, intended to be a personal mobility device. By this criteria, we can also ignore land locomotives and any similar vehicles the purpose of which was traction, rather than transportation. 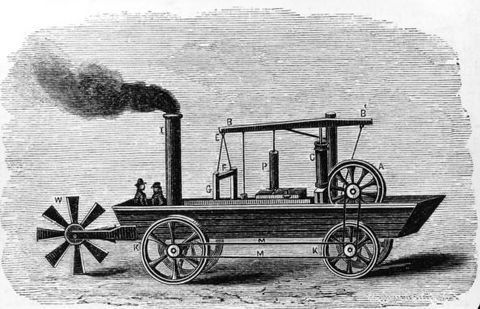 In fact, as the Automobile Quarterly publication The American Car Since 1775 discusses, Evans built the Oruktor because he could get funding for it; passenger-carrying steam carriages were his eventual goal. Yet like Cugnot, the machine he did manage to build wasn’t a passenger vehicle, per se, so no dice for Mr. Evans here.

What do we mean by car company?

There are a surprising number of surviving car companies that can trace their roots back centuries; notably, Peugeot was founded in 1810 and spent the mid-19th century cranking out coffee mills before moving into bicycles and, eventually, cars. The company that became Pierce-Arrow was established circa 1872 to make birdcages, among other sundry goods. Obviously, none of these would qualify as the oldest company founded to make cars—they happened into automobiles many years after going into business. 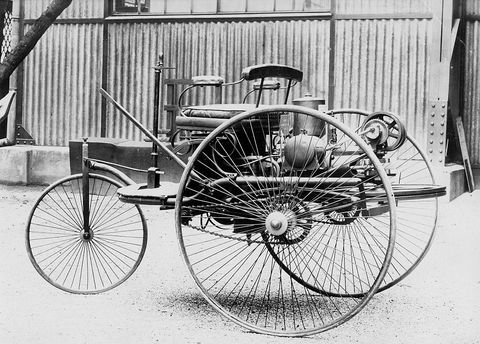 The famed Benz Patent-Motorwagen arrived just a few years later, in 1885, and despite its delicate look and tricycle configuration, it is a remarkably sophisticated, surprisingly fully realized machine. It might well be considered the first serious internal combustion-powered automobile, and its successor, the four-wheeled Velo, is certainly one of the first successful production internal combustion-powered automobiles.

Yet however natural the move into car production was for Karl Benz, whether it was always part of the plan when he founded Benz & Cie. is pure conjecture. Here, we’re trying to determine who was the first to go into business with the primary goal of building automobiles.

What about tinkerers and inventors?

Further, I’m going to distinguish between a tinkerer who happened to build something vaguely car-like and the founding of the first car company. To qualify, this needs to be a person or persons, ideally operating as some sort of legal entity, with commercial ambition. And while they don’t necessarily need to have been successful in the long or even medium term, they do need to have at least produced something other than debt and paperwork for it to count for the purposes of this research.

This is at least partly out of convenience; we need some sort of surviving record of the effort for it to even show up on the modern radar, and that’s a lot more likely to exist for an actual company than for some independent, self-funded futurist/crackpot working in a shed.

Further, there were a number of visionary attempts on both sides of the Atlantic to raise money for automotive projects that were simply too far ahead of their time to go anywhere. As early as 1804, Oliver Evans attempted to establish what he called the Experiment Company to raise funds for steam wagon construction but failed to obtain the capital (again, this is detailed in The American Car Since 1775). So, they don’t count here. 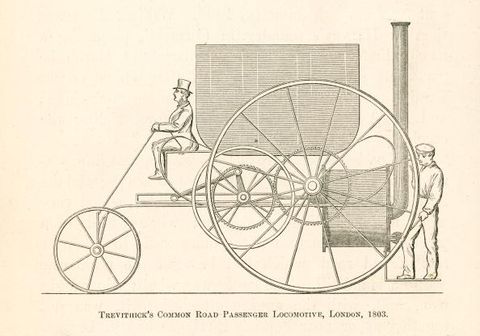 Who, then, was first?

That the very first automobile company (as we are defining it here, at least) was born in the United Kingdom seems like a safe bet; Englishman Thomas Savery patented the first commercial steam engine, a crude device used to pump water, in 1698. Patents for steam wagons or steam carriages started emerging there in the early part of the 19th century, and a number of operators were running surprisingly advanced steam carriages on public roadways by the 1830s.

One promising contender is Summers and Ogle, a partnership formed by William Alltoft Summers and Nathaniel Ogle to build these steam carriages. In 1831, the pair purchased an old iron foundry in Southampton, England, to go into production. These carriages were somewhat successful, with a number of documented routes in service throughout 1831 and 1832. Incredibly, their first contraption could manage speeds of 32 to 35 mph—that’s Model T territory, in the 1830s!

However, it looks like English inventor Goldsworthy Gurney (1793-1875, no known relation to Dan) beat them to the punch. In addition to work on stoves, lighting devices and the oxy-hydrogen blowpipe, Gurney took an interest in steam propulsion and sought to popularize steam-powered road vehicles. And under the auspices of the Gurney Steam Carriage Company, established 1825, he set about to do just that—and almost succeeded. 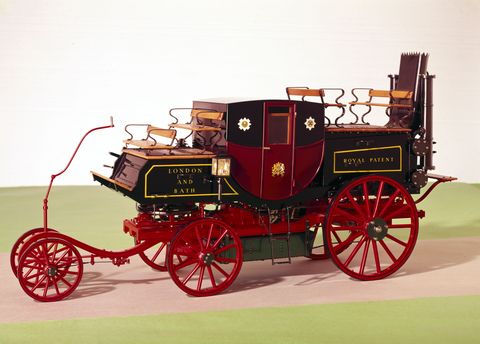 Lyman Horace Weeks writes of Gurney in the fascinating Automobile Biographies (which you can read online as a free e-book):

“In 1826 he constructed a coach about twenty feet long, which would accommodate six inside and fifteen outside passengers, besides the engineer. The driving wheels were five feet diameter, and the leading wheels three feet nine inches diameter. Two propellers were used, which could be put in motion when the carriage was climbing hills. Gurney’s patent boiler was used for supplying steam to the twelve horse power engine. The total weight of the carriage was about a ton and a half.

“In front of the coach was a capacious boot, while behind that which had the appearance of a boot, was the case for the boiler and the furnace, from which it was calculated that no inconvenience would be experienced by the outside passenger, although in cold weather a certain degree of heat might be obtained, if required.

“In descending a hill, there was a brake fixed on the hind wheel, to increase the friction; but independently of this, the guide had the power of lessening the force of the steam to any extent by means of the lever at his right hand, which operated upon the throttle valve, and by which he could stop the action of the steam altogether and effect a counter vacuum in the cylinders. By this means also he regulated the rate of progress on the road. There was another lever by which he could stop the vehicle instantly and in a moment reverse the motion of the wheels.”

Save for the somewhat odd-sounding “propellers”—deployable leg-like appendages intended to boost traction when climbing hills, which were later deemed unnecessary and discarded—this sounds a lot like a primitive van. It has brakes, a reverse gear and even, if I’m reading that description correctly, heat for those cold-weather commutes. It even weighed about as much as a modern car, with a similar footprint.

Gurney improved upon the design to the point where he was able to sell vehicles to Charles Dance, a sort of pioneering automotive investor/transit visionary. Weeks writes:

“Gurney’s carriage so fully established its practicability, that in 1830, Sir Charles Dance contracted for several, and ran them successfully from London to Holyhead and from Birmingham to Bristol. In the following year he ran over the turnpike road between Gloucester and Cheltenham for four months in succession, four times a day, without an accident or delay of consequence. The distance of nine miles was regularly covered in from forty-five to fifty-five minutes. Nearly three thousand persons were carried, and nearly four thousand miles traveled.”

All of this would point to Gurney being the first individual to operate a car company, albeit one with Dance as its only recorded customer.

So why haven’t we heard of this guy?

As for why you’ve never heard of Gurney and his magnificent steampunk creations: a fear of new technology and/or a conspiracy perpetrated by railroads and horse-drawn carriage operators, apparently. That the public would be a little hesitant to embrace these smoking, steaming, clanking machines is somewhat understandable, but it seems like punitive toll road charges for mechanical carriages, set at many times what it cost for a horse-drawn carriage or wagon to use the same roadway, is what ultimately made them uneconomical to operate. 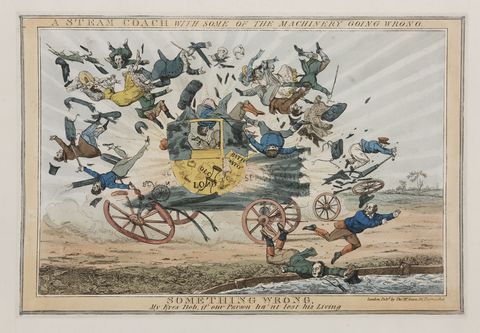 Then, beginning in 1861, Parliament imposed a series of highly restrictive Locomotive Acts, which heavily disincentivized road-going mechanical transportation; the Locomotive Act of 1865, for example, limited speeds on the U.K.’s roads to 4 mph in the country, just 2 mph in the the city, and mandated that every vehicle be preceded by a man carrying a red flag. This is especially ridiculous when you consider that vehicles were traveling several times that speed on English roads over three decades prior.

Though these acts were later amended, and then repealed, they effectively slammed the brakes on automobile development in the U.K. for decades. Railroad operators and horse-breeders were no doubt thrilled.

Were prohibitive restrictions not imposed, and were Gurney and his contemporaries free to pursue their visions, we might be dealing with a radically different transportation landscape today; it’s all speculation, but steam power might have been better positioned to fight with gasoline-fueled internal combustion, if only for a little while longer.

In any case, this is an excellent reminder of just how long the dream of mechanical automobility has preoccupied inventors—and how often, the challenges of technological development can pale in comparison to the resistance offered by entrenched interests and a slowly evolving status quo.