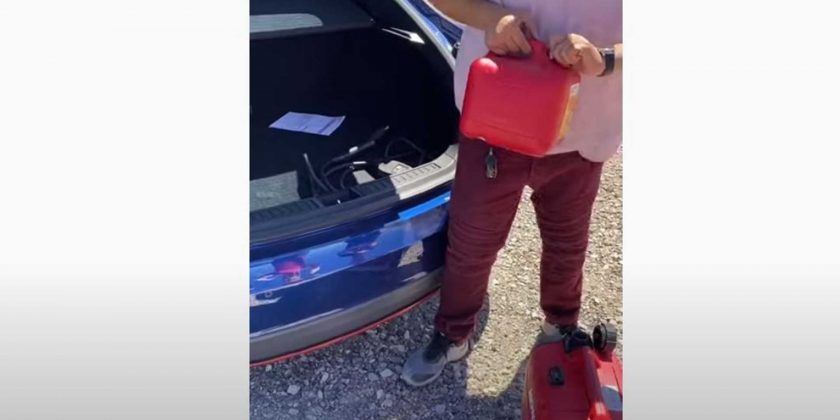 Or is there another reason he asks for a can of gas?

What do you do when your Tesla Model S fully depletes its battery and you need to extend its range? You ask for some gas, right? That’s the strange thing you’ll see here, but there’s a twist.

Right away we know that’s there’s something fishy about this video. Why? Well, the license plate on the Tesla appears to be the same as the one we saw in a recent Tesla gas station prank video. That caught our attention, but we still decided to watch the video.

In the video, you’ll see a Tesla stopped on the side of the road. A car pulls up behind it and the driver of the Tesla asks the occupants of the other car for some gas. The occupants of that car seem a bit confused, as they’re mostly aware that Tesla’s are electric and don’t use gas.

Regardless, the Tesla driver insists he need some gas and the friendly guy in the other car obliges and pulls a gas can out of his trunk (seems convenient to have one on hand, right?). The gas can appears empty though, or at least it’s quite spillproof and very light.

The Tesla driver tanks the gas tanks and proceeds towards his car. He pops the charge port open, but that’s not where he’s gonna put the gas. Instead, he opens the trunk and within lies a fancy Honda generator. He apparently needs the gas for this so that he can use the generator to charge up his Tesla so that he can make it to the nearest gas (whoops – charging) station.

Yes, it’s all a joke, but well played with the generator that we honestly didn’t see coming. We figure the Tesla driver would attempt to pour the gas into some orifice on the Tesla, but nope, it’s for the generator.

We’ve grown accustomed to these videos where someone is trying to gas up a Tesla. To the best of our knowledge, everyone to date has been setup, staged or faked. We’re not aware of one single such incident in which the driver of the Tesla truly thought the vehicle ran on gas. So yes, these are done for the humor and to perhaps try to convince some that the act of gassing up a Tesla is indeed something that some Tesla drivers try to do.

But you won’t believe what has been done with gas before and this one, to the best of our knowledge, is not a fake.