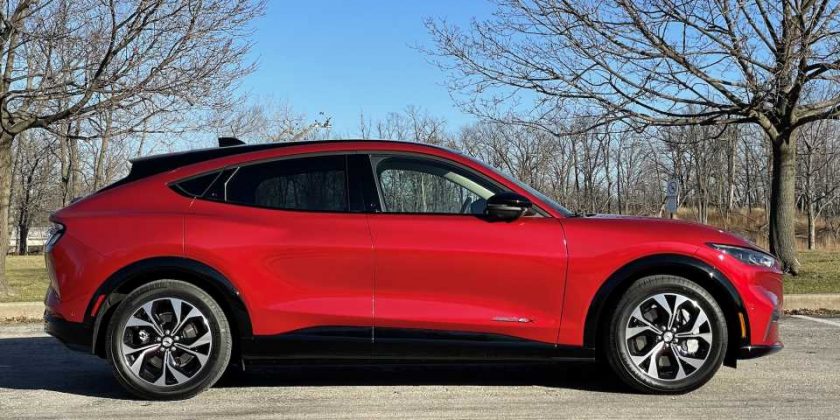 A Mustang winning a Best Crossover award? Believe it. The times they are a changing, and no vehicle represents those changing times better than the 2021 Ford Mustang Mach-E electric crossover SUV. The harbinger is a great car now, too, winning not only our Best Crossover and Best Electric Car To Buy 2021 awards, but also winning TCC’s overall Best Car To Buy 2021 award.

It’s the first time in our decade of awards that an electric car has won our top consumer award, fueled in part by a perfect 10 in our Green fuel economy category, which is one of six categories that make up our unique rating system. The 2021 Ford Mustang Mach-E logged one of the highest scores of the year with an 8.6 out of 10.

Based on the popularity of last year’s winner, the 2020 Kia Telluride, and its predecessors, the 2021 Ford Mustang Mach-E should compel shoppers, not solely because it’s an electric crossover competing directly against the Tesla Model Y. It’s a good crossover, plain and simple, and that’s what people are buying, accounting for about half of the 16 million projected annual car sales in the down year of 2020.

In certain ways, the first four-door Mustang molds itself after the original Mustang, with sequential taillights, a long nose with a ridged hood, and all the ponies galloping across its exterior and interior. But the Mach-E honors the pony car more in spirit. A development process that involved Mustang engineers not only gave Ford a means of extending the life and appeal of the Mustang, but also enabled the Mach-E to stand out from dozens of indistinguishable compact crossovers flooding the market, whether powered by gas or electrons.

Instead of an endangered 5.0-liter V-8, the Mustang Mach-E uses one or two motors and either a 68-kwh battery pack or 88-kwh pack that can get up to 300 miles in a single charge. Standard with rear-wheel drive and one motor, the Mach-E with the larger battery pack hits 60 mph in 6.1 seconds, but if speed matters most, the forthcoming GT model with two motors and all-wheel drive will hit 60 mph in 3.5 seconds, quicker than a GT500. It lacks that lovely, uniquely American V-8 roar. It also lacks gear shifts, and its abundant torque comes on instantaneously and without interruption. The larger battery and all-wheel drive trims the range to 270 miles and the 0-60 mph run to 4.8 seconds, but expect less range if you’re flooring it all the time.

The Mach-E is quick and tempting, and with the batteries mounted in the floor between the axles, it maintains a low center of gravity that combines with front and rear independent suspensions to allow less lean in turns than common crossovers, including the Tesla Model Y.

With no driveshaft tunneling through the cabin, the Mach-E can seat five adults and even 6-foot-6 passengers can sit in back without slouching. With the 60/40-split rear seats folded down, cargo volume expands from 29.7 cubic feet to 59.7 cubes, which is generous for a compact crossover and that doesn’t even factor in the additional 4.8 cubic feet of space in the frunk.

An available and recommended glass roof adds 1.5 inches of headroom inside, and highlights a compelling feature set that includes an 8-year/100,000-mile warranty for the battery system. The sleek cockpit showcases a 15.5-inch vertical touchscreen that’s easy to use, and a narrow 10.2-inch digital gauge bar. Apple CarPlay and Android Auto compatibility come standard with wireless charging, as well as excellent standard safety features that include automatic emergency braking, active lane control, and adaptive cruise control. The Mach-E can be optioned like a luxury car, with a Bang & Olufsen sound system and a hands-free driving system due out next year via an over-the-air update. Standard OTA updates should keep the Mach-E as current as a smartphone.

It’s not a Mustang in the traditional sense, but the inspiration taken from its name served to make the 2021 Ford Mustang Mach-E our Best Crossover To Buy, and it wasn’t even close; the 2021 Volvo XC60 and 2021 Kia Telluride runners up trailed it by a full point, on average.

Read all about the winners of The Car Connection’s Best Car To Buy 2021 awards—and find out which vehicles took home our annual Driver’s Choice awards as well as top honors from our sister sites, Motor Authority and Green Car Reports.