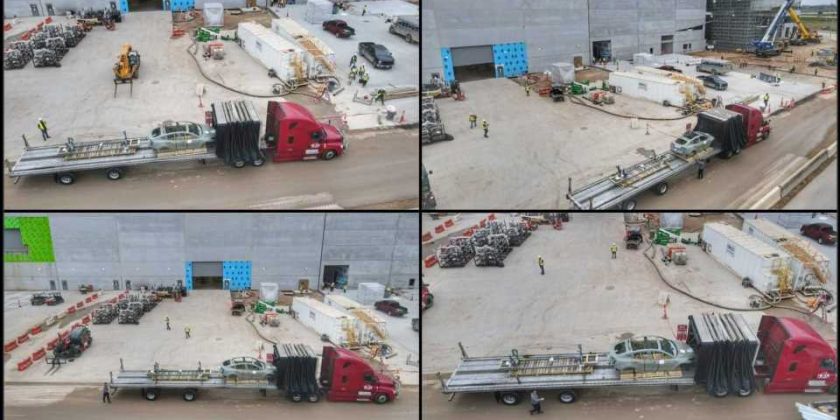 In the latest flyover video of Tesla Giga Austin in Texas, an interesting special delivery was noticed (watch from 12:30) – a Tesla Model Y body and alignment rig.

According to Joe Tegtmeyer, both were shipped to Giga Austin and moved into the north end of the paint shop.

It’s not clear what is the purpose, but the lack of the floor in the Tesla Model Y body suggests that it might be some kind of prototype, ready for the upcoming structural battery pack (plus front and rear megacastings).

“As noted in the intro, we get some close looks at a Model Y test body and aligning rig being delivered, lifted off the truck and moved inside the paint shop. This is a full body with doors, hatch and hood and appears to already be e-coated. This was a delivery from off-site, so unclear what the purpose is at this time, but it may be for further calibration and testing of paint shop equipment.”

We saw some of the ideas behind the new body and chassis by the way of the presentation of the Tesla Giga Berlin plant in October.

As far as we know, Tesla intends to launch a highly upgraded Model Y with a structural battery (not only the pack enclosure but also the cells are part of the structure of the vehicle) and all-new 4680-type cylindrical cells.

It’s difficult to say when it will happen as the initial production might still rely on the 2170-type batteries, but it would be probably the new, top-of-the-line performance Model Y.

Here is a second video, also recorded on December 27, shared by Jeff Roberts: