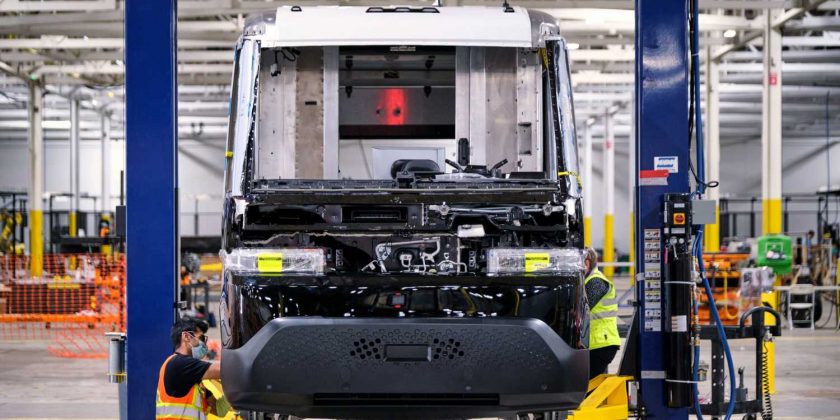 This week BrightDrop has begun production of its first electric delivery vans, with the first examples of the the EV600 rolling off the assembly line. BrightDrop, of course, is General Motors’ technology start-up aimed at last-mile deliveries, with the venture planning to hand off the first examples of the electric vans to FedEx ahead of the holiday season. The trucks are expected to offer up to 250 miles of range thanks to GM’s Ultium battery technology.

That’s right: BrightDrop is using the automaker’s Ultium battery platform in these electric vans, around the same time as pre-production examples of the electric Hummer are popping up on the streets of Detroit.

“Getting our first electric vehicles on the streets in record time before another peak holiday shipping season is the best gift we could receive this year, especially when we consider the supply chain headwinds the world is facing right now,” said Travis Katz, BrightDrop president and CEO. “This is a strong statement to the market of how our unique operations setup, which marries the cutting-edge innovation, agility, and focus of a technology startup with the scale and manufacturing might of a major automaker, can deliver real value to both customers and the planet.”

In fact, BrightDrop has two vans in the works, with the smaller EV410 offering just over 400 cubic feet of cargo space, in comparison to 600 cubic feet in the larger model. The shorter of the two still has a length of just under 20 feet but a shorter wheelbase of a little over 150 inches, with the duo designed to offer the same maximum range on a full charge.

BrightDrop’s two vans advanced through development at a record pace of just 20 months, with the company partnering with a supplier to assemble the early examples in low-volume production mode. In fact, this pace earned it the title of the fastest vehicle program to market in General Motors’ history, according to the automaker. Fuller production is expected to start once GM’s CAMI Assembly Plant in Ingersoll, Canada, is fully converted for the effort by November 2022. But the first low-volume production examples will play in important role in BrightDrop’s debut as a provider of electric delivery vans.

“As e-commerce demand continues to increase and the effects of climate change are felt like never before across the globe, it’s imperative that we move quickly to reduce emissions,” Katz added. “BrightDrop’s holistic delivery solutions are designed to help tackle these challenges head on. We’re excited to get these world-class electric vehicles on the streets in record time.”

There is an entire cottage industry of EV start-ups aiming to offer electric delivery vans to businesses large and small, especially now that the surge in online shopping is putting plenty of pressure on logistics giants in the pandemic era. With the start of production this fall, even in low-volume form, BrightDrop is certainly among the better-poised hopefuls, along with Rivian and Arrival.

It’s still too early to predict just which of the EV van efforts, from automakers and new start-ups alike, will be able to capture large-enough slices of the market. Automakers like Mercedes-Benz are also in the game, competing for large contracts from logistics giants, so the time for smaller start-ups to advance into the lead is shrinking fast. Of course, the same logistics giants also have to start actively buying electric vans, which is by no means guaranteed, and as we’ve recently seen it hasn’t been possible to get the USPS to commit solely to electric delivery vehicles from the start.