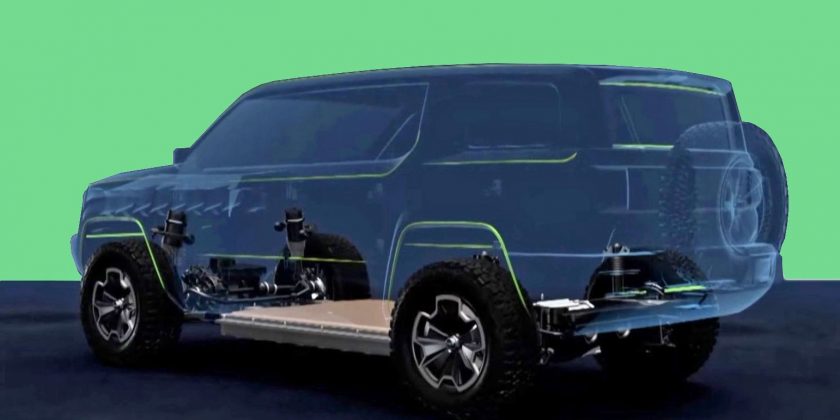 Earlier this week Jeep parent company Stellantis reconfirmed plans for a battery-electric Jeep model, set to arrive on sale in 2023. Jeep’s electrification plans were foreshadowed by the company’s EV day earlier this summer, which revealed the outline for a number of battery-electric models from the Dodge, Chrysler, and Jeep brands, some of them appearing quite production-ready, and others still obscured and far over the horizon.

The EV day presentations were notable for previewing not one but two future Jeep models, both of which did not really resemble any models currently on sale from the brand. One was shown with a surprising level of detail, as well as some unexpected design details, while the other was seen only in a monochrome profile, but was distinct enough to warrant being recognized right away as something entirely new.

The former model, shown in a transparent rendering above, can perhaps be expected to be the one headed into production in 2023, given the level of detail that the automaker felt free to show, and it’s given that its platform could also be expected to underpin other models from Stellantis, possibly the remarkably ready Chrysler concept seen during the event.

What can we expect from this Jeep EV?

The proportions of the windows and overhangs reveal this as a fairly small model, about the size of the Renegade, or positioned somewhere between the Renegade and the Compass. This can be seen in the scale of the pillarless doors, and the relatively small window between C and D pillars. The likely scale of this model can also be ascertained by the relatively short overhangs, as well as the size of the spare tire. Rear-mounted spares are not something that Jeep has offered on models like the Cherokee or larger SUVs, and in the rendering this particular spare appears to be quite large in proportion to the rear gate. Its placement also suggests that interior cargo room would not have supported a smaller spare due to space constraints, also strengthening the case for a relatively compact model.

The rendering also reveals that this model is relatively tall compared to the size of its tires and wheels, which is common for smaller models that need to maximize height and headroom. The apparent lack of a B-pillar is also something that far easier to achieve with a smaller car these days, if Jeep indeed intends to build it like this, perhaps as an homage to the SJ Cherokee, which had two doors but long rear side windows.

In effect, this is a model that could feature the footprint of the Renegade or something similarly sized, and aimed at a modest price point for an EV. The Renegade itself is known to be nearing the end of its product cycle, so the new EV model could well replace it in the next couple of years, playing the role of a compact, battery-electric offering in Jeep’s lineup.

You’ve likely noted that Jeep showed off yet another EV concept earlier this year, in a much more detailed manner.

The Magneto concept effectively previewed a battery-electric Wrangler earlier this spring, which is also expected to debut this decade at some point. But the timing for a production version of this model remains unknown. One issue is that the current-generation Wrangler is just four years old at this point, and it has recently received a PHEV version. An all-new battery-electric Wrangler, therefore, could require a new platform from among the ones planned by Stellantis, rather than using the existing Wrangler platform. So it’s not a forgone conclusion that an electric version of the Wrangler will be the first to debut in 2023, even though Jeep has promised an electric model in every segment it occupies by 2025.

Jeep also has to make judgments about the segment that EV buyers would buy in 2023, so a battery-electric Wrangler may not be the automaker’s first choice given the fact that the Renegade is rapidly approaching the end of its product cycle, and will need a city-friendly replacement far sooner—a replacement that would also need to be offered in Europe. It’s not lost on Jeep that compact and midsize electric crossovers are the main focus of its competitors in the next few years when it comes to new EV models.

What size and price category of EV would you like to see first from Jeep? Let us know in the comments below.