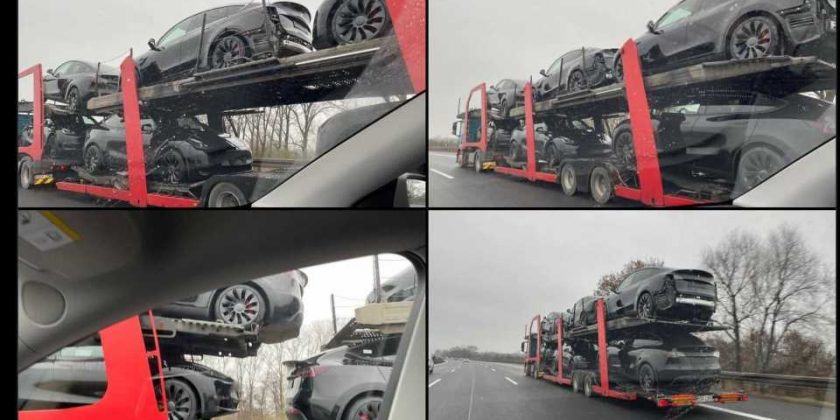 Tesla Giga Berlin in Grünheide near Berlin, Germany must be pretty well advanced in its preparations to start series production of customer cars, as the first cars were seen leaving the plant.

Several images of a vehicle carrier with Tesla Model Ys (a total of six cars) were posted on Twitter by Tesla_Adri, who links to Steve&Julian Igembb Facebook.

The destination remains unknown. All we know is that those are Performance versions, and all of them are black. At least some are missing some parts – like rear bumpers.

It might be a batch of cars envisioned for crash tests or other tests ahead of production.

“Model Y Performance spotted leaving Giga Berlin on a trailer . The purpose of this cars (Demo, Crashtest, Validation) is unknown.”

Usually, we see some test cars leaving the plant about a month or two before the production starts. Currently it’s ex,pected that Tesla will get approval for the plant and start production in early 2022 – maybe in January or February. Customer deliveries would start shortly thereafter.

Those new Made-in-Germany (MIG) Tesla Model Y are expected to be the latest versions, with new parts, including AMD Ryzen processor for quicker infotainment, 12 V lithium-ion auxiliary battery, and more. At some point, new exterior colors will be added as well.

At the launch, Tesla will probably produce standard battery packs with 2170-type cylindrical battery cells. The long-term plan is to switch to 4680-type cells and a structural battery.

Meanwhile, the Tesla Giga Shanghai plant carries the heavy load with supplying Model 3 and Model Y for China (and some surrounding markets) and Europe.