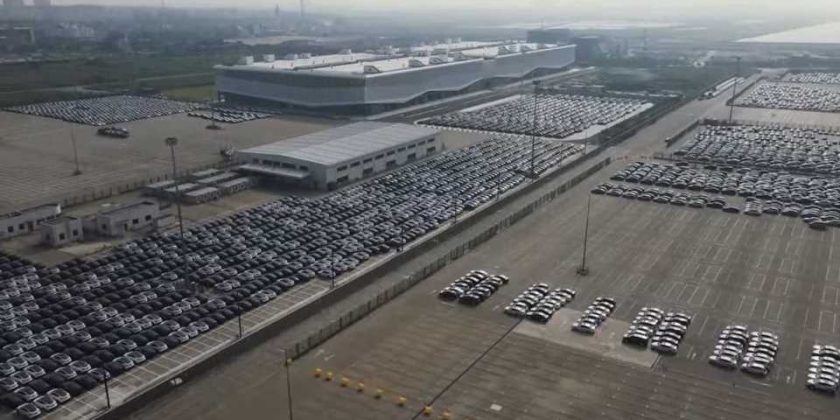 As you can see from the drone flyover above, which was filmed at the Luchao Port in China, there are loads of Tesla Model 3 sedans and perhaps some Model Y crossover staged for export. For those unaware, the port is the location near Tesla’s Gigafactory in Shanghai that’s used for shipping out Tesla’s exports.

Much like the vast majority of global automakers, Tesla has had some obvious struggles this year, and much of it was caused by a lengthy shutdown in China due to the COVID-19 pandemic. China lost a sizable chunk of production for both local sales and export. However, since the factory was approved to reopen, Tesla has been ramping back up to full capacity.

Once Tesla was allowed to reopen its factory in China, it went to great measures to get all workers back to work. The company was using a closed-loop setup and feeding and housing factory employees at and near the facility. More recently, Tesla accelerated production and deliveries in China to record-breaking numbers. Based on early data, it seems the automaker not only recovered production at the Giga Shanghai, but was able to sell nearly 80,000 EVs in China in June 2022 alone.

The drone video from Tesla fan and photographer Wu Wa shows thousands of Tesla vehicles sitting at the port, and clearly, there’s still room for many more. Wu Wa focuses on the events surrounding Tesla’s factory in China, and he’s been covering the Shanghai factory since Tesla first broke ground. According to various local news sources in China, the EVs shown in the drone footage will be heading out to Europe in the near future.

Based on a recent report from Teslarati, Wu Wa has noted that Tesla is clearing out its holding lots at Giga Shanghai as it moves the electric cars to the lots at the Luchao Port. Tesla typically uses the first part of each quarter to deal with exports so that it can hone in on the quicker local deliveries as the quarter nears its end.

Tesla also added a third shift at its new factory in Berlin, and it’s now retooling the plant as part of efforts to increase production.