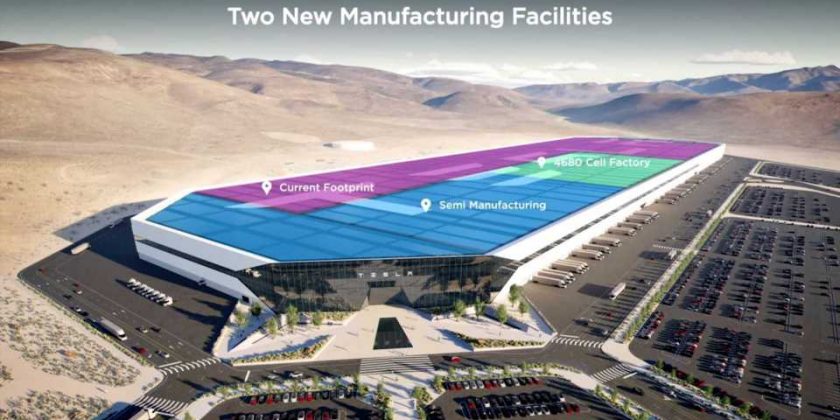 As promised, Tesla has announced a massive $3.6 billion investment at Gigafactory Nevada yesterday.

Elon Musk delivered a presentation at the plant in the presence of Nevada Governor Joe Lombardo and made some interesting comments regarding the new 4680 battery cell plant that will be housed under the same roof as the future Tesla Semi manufacturing facility as part of an expanded Gigafactory Nevada complex.

Speaking of the new 4680 battery cell production line, Tesla said in a short blog post on its website that it will have an initial annual capacity of 100 Gigawatt-hours (GWh), which would cover an annual production of 1.5 million light-duty electric vehicles.

Elon Musk elaborated on that during the presentation – you can watch it in full in the above video – and revealed that long term, the 4680 cell manufacturing facility in Nevada could achieve production as high as 500 GWh a year.

He didn’t explain what long term means in this context, though. The executive also noted that the 4680 cells that will be made at the new Gigafactory Nevada facility will not be used just for electric vehicles. Musk said that part of the production will go to Tesla Energy’s battery storage products.

This means that in the future battery storage products like the Megapack and Powerwall home batteries will use Tesla’s new 4680 cylindrical cells.

“We expect the new cell factory to produce at least 100 gigawatt-hours. And that’s really just to begin with. Long term, Tesla is aiming to produce well over 1,000 Gigawatt-hours, possibly 2,000 or 3,000. So this really is just the start. And that’s equivalent to 1.5 million additional Model 3/Y vehicles, and we’ll also be using 4680 for stationary storage as well. And to be clear, this is in addition to our suppliers.”

It is not clear whether Musk’s goal for Tesla to produce well over 1,000 GWh a year is for Gigafactory Nevada only or it includes production from Gigafactory Texas, Gigafactory Berlin-Brandenburg, and other battery cell plants that will open in the future.