While several automakers and EV startups prepare to launch more than half a dozen electric pickup truck models in North America, including the Hummer brand we’ll see next week, there are things happening at the other end of the size spectrum when it comes to EVs. At least in Europe.

Renault’s Dacia brand has revealed what will be the continent’s least expensive EV, a subcompact SUV called the Spring.

While Europe has certainly had small electric hatches like the Renault Zoe, Nissan Leaf and the SEAT Mii, the subcompact Spring will be less expensive still with a starting price expected to land less than $23,000, prior to any national incentives. Exact pricing has not been announced just yet but since we know what other inexpensive EVs cost, including the SEAT Mii Electric at just under $23,000 in most countries before incentives, the Spring will be aiming to slide under that price point.

What does that price range get you, assuming you live on the other side of the Atlantic?

The Dacia Spring will be powered by a 26.8-kWh lithium ion battery, giving it a 140-mile range in the slightly optimistic WLTP cycle. The trade-off for this range is that the front-wheel drive Spring has just one 44-hp motor, which can be dialed down to 31 hp to squeeze out a little more range: Pressing the ECO button delivers 10% more driving distance at a top speed of 62 mph. So Ludicrous speed won’t be on the menu, though a regular 78-mph top speed means it can move when it needs to. The Spring will also feature 30-kW fast charging, so it can be juiced up to 80% charge in less than an hour. 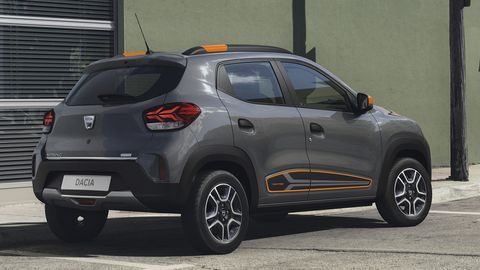 But the Spring also offers room for four, plenty of ground clearance for some light off-roading, and just enough cargo space.

“The Dacia brand is about redefining the essential. We are known in the car industry for our different revolutions, first with the Logan and then with the Duster which made the SUV accessible for all,” said Denis Le Vot, member of Groupe Renault Executive Committee. “Today, this is Dacia’s third revolution and its name is Dacia Spring. The Dacia Spring will make inroads into three distinct markets: retail market, car-sharing with numerous car-sharer operators throughout Europe and on the last-mile delivery with its cargo version. Cool and trendy, the Dacia Spring will change the game as an affordable electric mobility solution for all.”

The base Spring might seem a bit spartan at first with air conditioning being an extra-cost option, as on a lot of entry-level cars in Europe, but more expected goodies are on the menu including a 7.0-inch infotainment touchscreen with Android Auto and Apple CarPlay capability, satellite navigation, a USB port, Bluetooth, power mirrors and more. Even the spare tire is an option for which you have to pay extra. A 3.5-inch digital dash cluster is standard, however, as are LED headlights. There is plenty of standard safety tech on board as well, including six airbags and automatic emergency braking (AEB).

But when it comes to no-frills electric driving, the Dacia Spring will be tough to beat. Even Volkswagen’s ID.3 hatch is positioned north of the Dacia’s expected price range.

More importantly, the Spring is among the first cars seeking to compete with gas and diesel models in price, making buying an EV an economical and not just an environmental decision for Europeans.

The Spring goes on sale next spring and you won’t be able to get it here no matter how much you beg the NHTSA to let it in. Still, we expect to see a few of these on manufacturer and diplomat plates in a year or so.

Sign up for comments and let us know what you think about the Dacia Spring. And other cars.