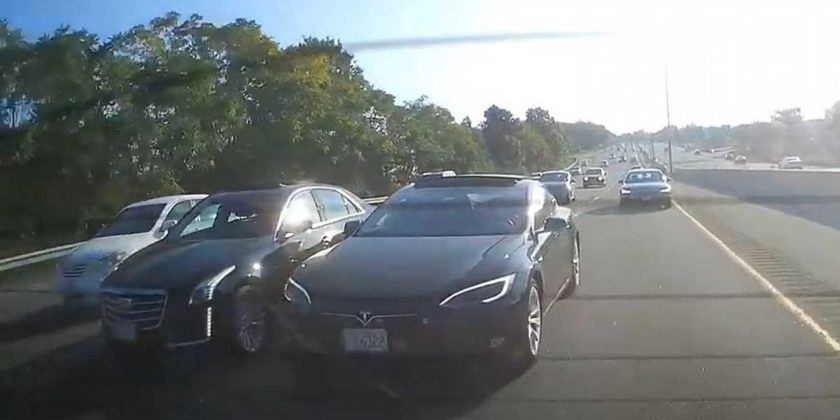 It’s incredible that no one was hurt here.

What can we even say here? Wow, is probably the best initial reaction. Honestly, we’re just glad no one was hurt. You’d think this Tesla Model S driver had an injured or pregnant passenger in the car, in which case they should have called 911. But, while we have no way of knowing, that doesn’t seem to be the case. It’s pretty clear that this is a road rage battle that was likely already unfolding before the camera was rolling.

It’s impossible to know what the events were that led up to this extremely dangerous display of stupidity, but it makes no difference. No matter the reason, this type of driving is far outside the realm of acceptable. Some people will say the Cadillac driver must have started it and set the Tesla driver off, which certainly could be the case, but it’s no excuse for what happens next.

As you can see from the video, this Tesla Model S driver is all over the highway, jerking the steering wheel side-to-side while traveling at high speeds. The driver gets so close to the Cadillac as it’s passing, it almost sideswipes it. Then it swerves toward the side of the Cadillac acting as if it’s going to intentionally crash into it.

Finally, the Model S pulls in front of the Caddy and slams on its brakes. We’re not talking about a bit of brake-checking here, but what seems to be almost a full stop in the middle of the highway. It’s amazing that there wasn’t a terrible accident. After that, it seems the Model S driver races ahead and brake-checks the car recording the video.

Most of the driving videos we share on InsideEVs are from Tesla vehicle’s built-in dashcams. This means they typically don’t feature Tesla vehicles, but rather, other cars in accidents or driving recklessly, etc. This is only because if you have cameras in and on your car, they’re not recording your own car, but the actions of others.

In this recent video, another driver is filming from both the front and the rear with GoPro cameras. Hopefully, he was able to get the Model S’ description, license plate, and the video footage to the authorities.