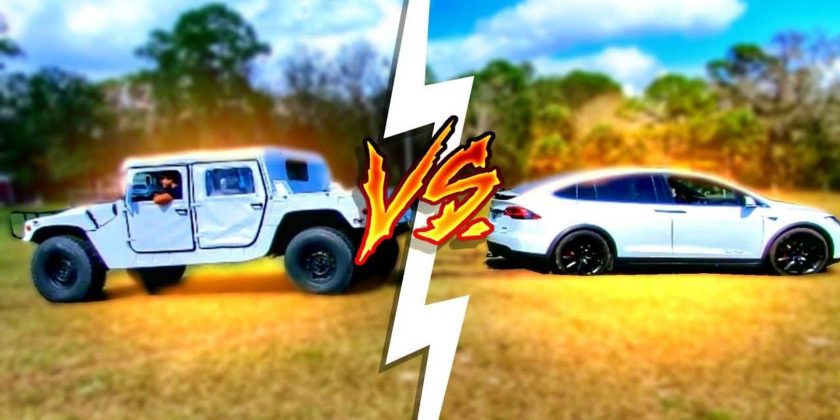 Can the electric SUV out tug the mighty Hummer and huge F-450?

This video pits the Tesla Model X against the original Hummer and a Ford F-450 Super-Duty pickup truck in a tug of war battle. Let’s watch to see if there’s a winner.

This particular video first pits the Model X up against the original, old-school military version of the Hummer. This iconic off-roader is about as rugged as they come. The matchup appears to favor the Hummer, but the results are not quite as expected.

The second battle features the Model X against a huge Ford F-450 Super-Duty pickup truck. The truck’s mass alone should seal the win, but again, the result is not as you’d expect.

The last battle puts the Hummer up against the F-450. This more even matchup ends with some bent metal.

The video description, translated to English, reads as follows:

Hey guys, which one do you think wins this one? TESLA X Performance, F450 or US Army Hummer?

When Tesla debuted its Cybertruck, it featured a video showing the electric truck easily beating the Ford F-150 in a tug of war contest. The was a lot of controversy surrounding the matchup though and there’s was even a hint of a rematch from Ford. However, Ford later backed down from challenging the Cybertruck in a tug of war challenge.

That didn’t put an end to the F-150 versus Tesla contests though. They continued on even if unofficially and even in some of the weirdest of ways.

Following all of those tug of war battles featuring Fords against the Cybertruck, a new type emerged in which RC cars and even mini versions of the Cybertruck went head to head in tug of war against either other RC cars or even full-size SUVs.

Later on, other automakers such as Lordstown got in on the action. Lordstown pitted its Endurance electric pickup truck against a Ford F-150 in a cool tug of war battle and now there’s this latest video of the Model X taking on some super strong competition in a tug match. However, we must again note that these tug of war battles really don’t mean much. It all comes down to traction, weight and hitch height really and in this one, the lack of traction is the determining factor.