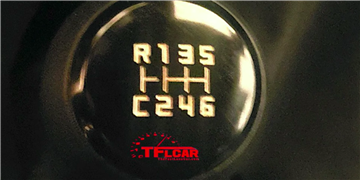 The 2021 Ford Bronco is almost here. The company has planned to unveil its highly anticipated 4×4 in July 2020, meaning we’re about a month away from seeing it officially. But that hasn’t stopped more leaked pictures of what look to be the interior, engine bay, and underside from popping up online.

The Fast Lane Car on YouTube managed to obtain a collection of Bronco spy shots, giving us a mostly clear look at the car’s interior and mechanical details.

Inside, we get our first look at the manual shifter, which, judging by the pattern markings, seems to have six forward gears, a reverse gear, and a “C” gear, likely a low-range crawler gear. This matches up with what we’ve heard in the past about the truck receiving a seven-speed manual transmission. Other interior shots include buttons for front and rear differentials, manually removable roof pieces, and a collection of auxiliary switches.

The Fast Lane Car channel also managed to get ahold of a picture of the engine bay, which seems to show a turbocharged inline-four engine. Though unconfirmed, this is likely a version of the 2.3-liter Ecoboost unit found in the Ranger. A couple of other underside shots show off the car’s driveline and front independent suspension.

Head on over to our roundup article here to check out the rest of the information we’ve gathered on the Bronco so far.