At the end of Tesla’s Cybertruck reveal event, the company unveiled a separate vehicle: an ATV designed to accompany the truck, capable of mounting into the bed and charging. It’s unclear at this time if the ATV will be a production vehicle. But it’s real, and it drove into the bed of the pickup on-stage. 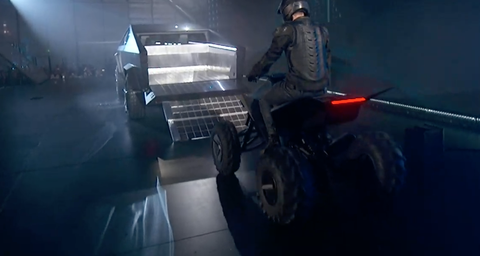 CEO Elon Musk didn’t go into much detail regarding the Tesla-branded four-wheeler, but from the looks of it, it seems to be fairly similar to your average gasoline-powered ATV. From what we saw during its performance onstage, power is sent to the wheels through a chain drive, with body panels that extend over each wheel.

Obviously, it’s electric, though no specs were revealed during the launch. We’re curious to find out what sorts of performance it has in store.

We reached out to Tesla for more information and will update this post if we hear back.