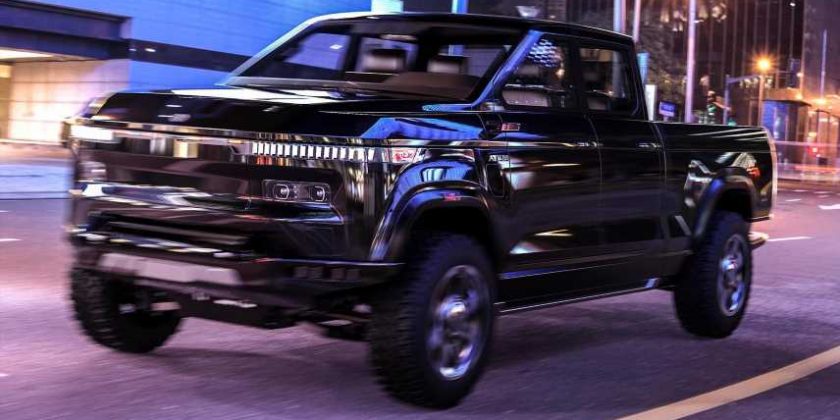 Atlis CEO Mark Hanchett thinks big. When he set his mind on building the Atlis XT electric pickup truck, he wanted to solve the biggest problem first—namely getting 500 miles’ worth of electric charge into the truck at about the speed a diesel pump could do the job in a conventional vehicle. We got him on the phone to answer a few questions about how all this will work in advance of a November 11 virtual unveiling event for the Atlis XT truck.

One key to cramming a lot of electrons into a battery quickly is managing thermal loads, and the flow rate of the current is key to that. The higher the voltage, the lower the current at any given power delivery rate. So while the state of the recharging art tight now is 400- or 800-volt DC current, the Atlis pack envisions 1,600-volt charging. Its battery will function at 1,600 volts, but in order to guarantee backward compatibility with SAE CCS chargers, the pack can virtually “subdivide” itself into 800 or 400-volt components. And while today’s standard is going from zero to 80 percent charge in around 20 minutes, Hanchett claims his truck will deliver zero to 100 percent (500 miles with the largest of three available battery packs) in 15 minutes. There is some percentage of battery capacity at the bottom and top of the cell that does not get used, but that also isn’t factored into the range figures.

The magic is not in the form factor or chemistry per se, according to Hanchette, but rather in the thermal management. The cells are heated at the beginning of the charge and cooled toward the end in order to prevent “dendrites” from growing and shorting the cell, and temperature is maintained extremely uniformly across the cell during the process using silicon-based cooling liquid. The “Z-fold” mechanical design of the cells, anodes, and cathodes also contributes to the fast charging capability of these prismatic “tab-less” batteries.

Atlis expects its users to primarily charge at 1,600 volts, with few customers working from a model of centralized overnight charging at a lower rate. The batteries are expected to survive 2,000 fast-charge cycles. And Atlis plans to roll out its own ultra-high-speed charging infrastructure.

While some reports have suggested available battery-pack sizes of 125 and 250 kWh, “Atlis Motor Vehicles chooses not to disclose the actual capacity of the battery packs in units of Ah or kWh at this time.” What we do know is that the batteries will package between the truck’s robust frame rails.

Most Atlis XT trucks will feature two axles, for a 20,000-pound gross vehicle weight rating. Tandem rear axles easily scale that to 30,000 pounds and six-wheel drive. The axles are also envisioned to feature fully independent suspension and to be identical front and rear. That means all-wheel steering is easily achieved, and for the moment Hanchett envisions allowing up to 32 degrees of rear-wheel steering to seriously shrink the XT’s turning circle. (That number will be less impressive with the dual rear-wheel option. Yes the Atlis is planned as a dually, too.)

Maximizing “up time” is of paramount concern for the types of contractors and industrial customers Atlis is targeting with the XT, so by designing everything to be “plug and play,” Hanchett claims that it will be possible to swap out a problematic electric motor and gear-reduction unit in around 20 minutes. Ditto other subassemblies like suspension corners.

Expect a range of wheelbases from 144 to 176 inches and most other general dimensions to mostly mirror that of the conventional 3/4- and 1-ton pickups, with pricing also lining up with them. Hanchett targets $45,000 to start for a short-wheelbase 300-mile XT truck good for 10,000 pounds of towing. The 500-mile 35,000-pound gooseneck/fifth-wheel-prepped model should start around $85,000.

Expect to see new videos of the Atlis XT rolling buck appear during the next few weeks. In the first quarter of 2021 we’re promised more specific details on the XT in support of customer deliveries, which are expected at the end of the year. That’s because, as Mark Hanchett quipped at the end of our interview, “I don’t operate at the speed of industry, I operate at the speed of light.” Atlis is not taking preorders per se, but rather encourages investment in the company.