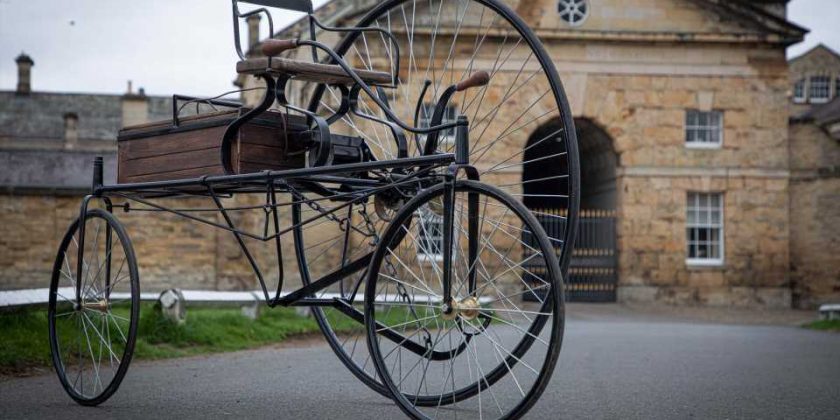 I’m an advocate for electric cars needing to get back to basics. There’s no need to be running off, sticking in 56-inch touchscreens, or making the EV larger than a small European state. Really, one of the things we should be working on is taking existing chassis, finding ways to quickly convert them to EVs, and worrying about all the fancy stuff later. Nothing new under the sun and all that, which is how I found myself driving a converted electric tricycle from 140 years ago through the British countryside.

Two weeks ago, journalist Jeremy Hart got in touch with me and asked me if I wanted to drive a replica of an EV from 1881. The answer, obviously, was yes. Nothing on earth could be more my jam than this. Once I’d worked out if it was legal for me to actually leave my house and drive something under the U.K.’s lockdown restrictions, I was straight on the train to Surrey to have a go in a remake of what was very probably the first-ever vehicle with a rechargeable battery. 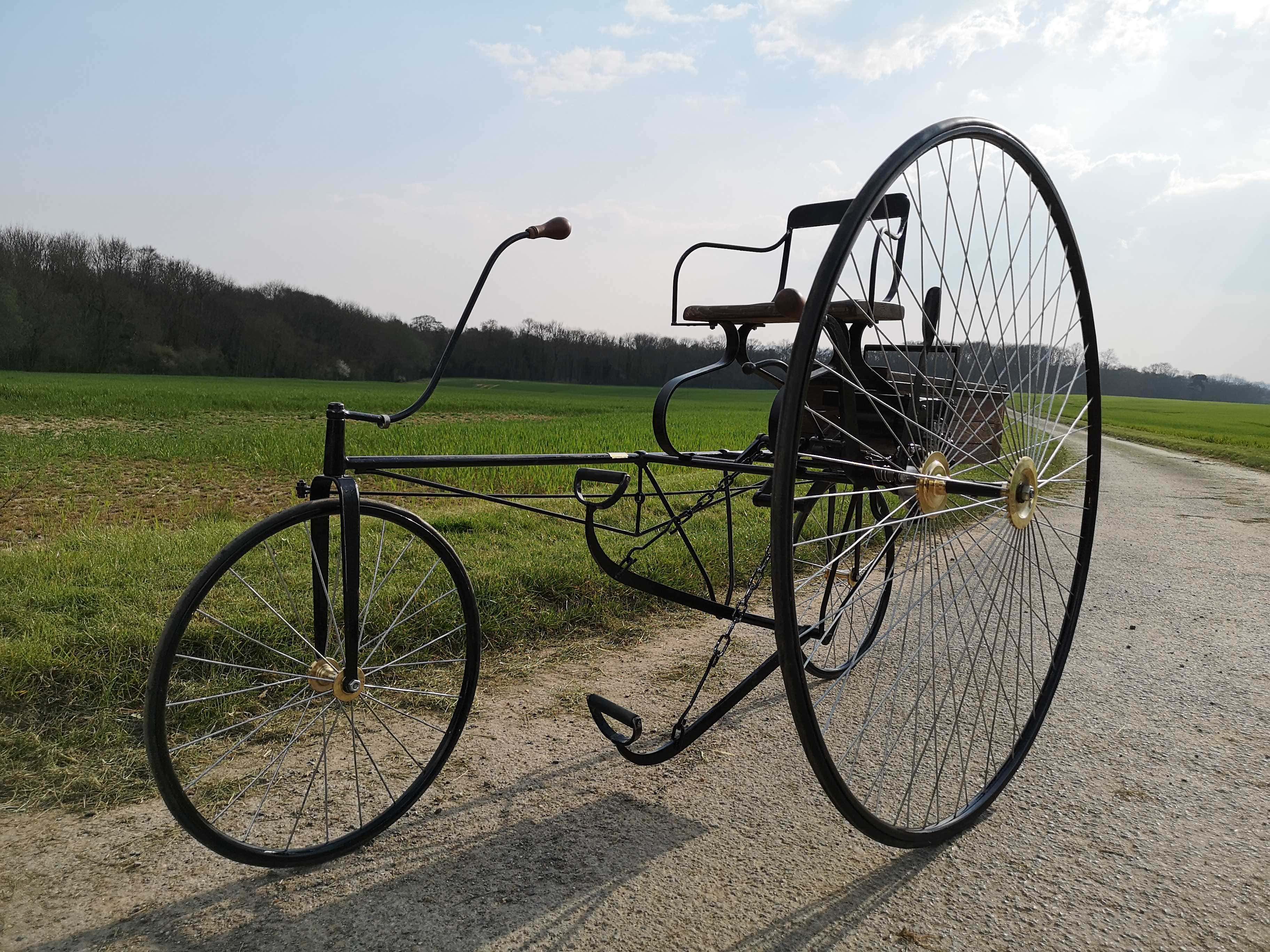 Not sure what image you were expecting here but: Yes, this is an electric tricycle from 1881. Or, well, an unbelievably faithful replica of one that Hart commissioned and artisan bicycle designer Christian Richards built.

Because the original vehicle was an adaptation rather than a purpose-built chassis, the yoke-like pedals in front still work and can power the vehicle—and swing wildly, threatening to take your shins out when it’s under motor power. The single seat is at the top, perched a bit perilously, and the battery is—as it seems to have been on the original—in a pannier attached to the rear of the bike. The motor drives the big left-hand wheel and the two smaller wheels are connected to what’s surprisingly responsive steering.

Now for the facts about this vehicle. It’s not really a stat sheet so much as it is a story.

Before 1881, there had already been some progress at making electric vehicles happen. Ányos Jedlik, a Hungarian inventor, had made a small cart that used a motor to move in 1828. Four years after that, Moritz Jacobi, a Russian engineer, made an electric boat using non-rechargeable batteries that poisoned its passengers so seriously even the early pioneers of vehicles were forced to admit they’d succumbed to nitrous fumes.

By 1839, a Scottish inventor called Robert Davidson created something that, today, is widely credited as being the first electric car. It ran through the streets of Aberdeen, Scotland, with a passenger, but everything we know about it—which admittedly, is a surprisingly small amount for what was a huge breakthrough—says it used chemical, non-rechargeable batteries.

When Hart and Richards set out to replicate the electric tricycle French inventor Gustave Trouvé took to the streets of Paris in 1881, there was so little documentation that a quick sketch was basically all there was to go off of. It’s significant, as a vehicle, because it was rechargeable and Trouvé drove it down regular roads—which as anyone who’s driven in Paris knows is kind of an experimental experience even if you’re in a well-tested Renault Clio. 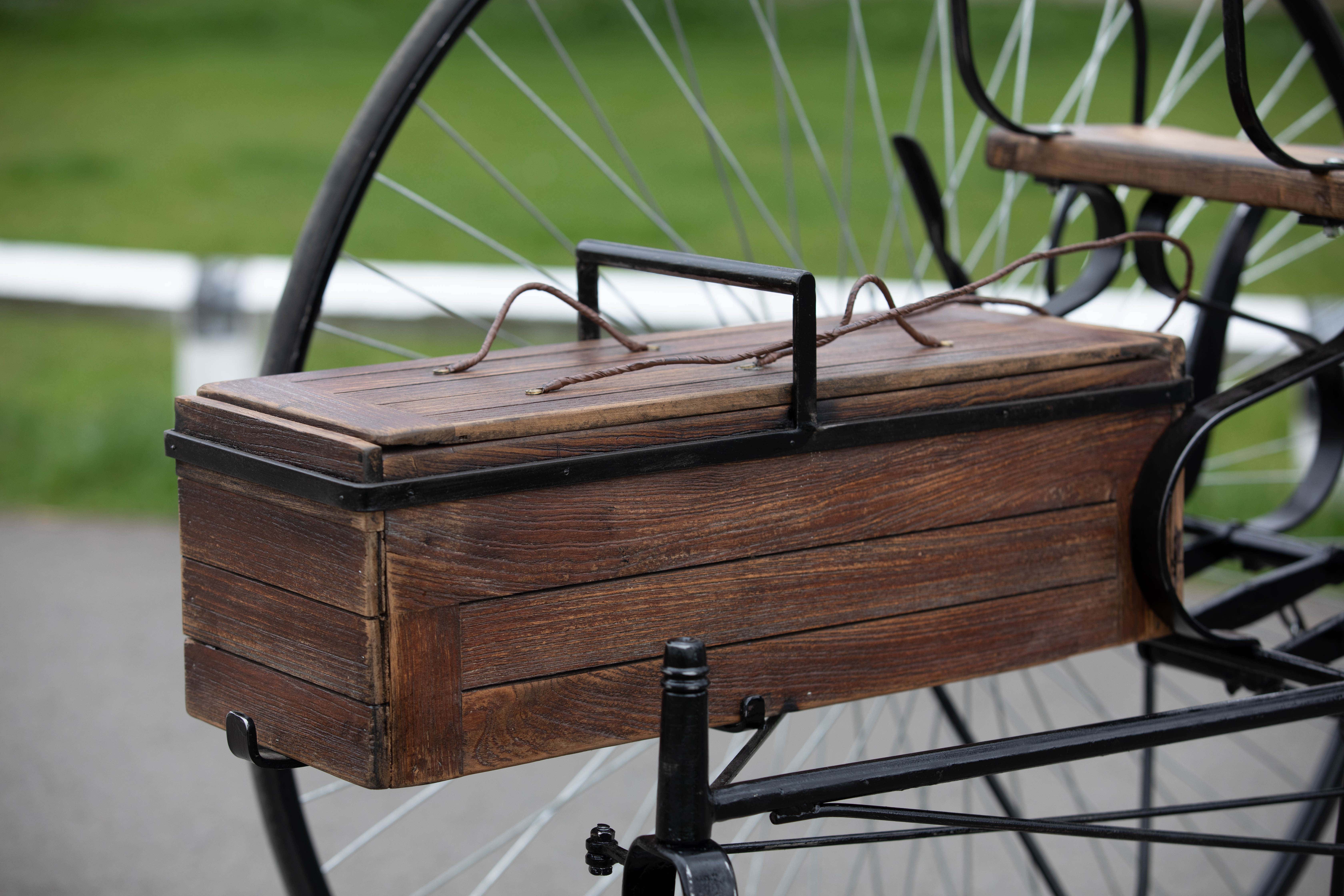 The battery housing on the converted tricycle.

The illustration showed Trouvé’s electric tricycle wasn’t purpose-built, he had to convert it. He’d used an existing pedal vehicle made by a British manufacturer and converted the chain to run from the motor rather than the pedals. And the reason no further information about it exists is that he took it for a drive, presumably decided it went well, and then disassembled the whole thing. He took the motor and battery with him to work on an electric boat project that would lead to him inventing the outboard motor.

So why anyone would try and recreate the short-lived e-trike? The answer is fairly straightforward. Hart likes researching the history of electric vehicles and once he’d found out such a key part of them—like Davidson’s car and Jedlik’s cart—was missing, it seemed obvious the thing to do was try to recreate it, especially with a tantalizing 140-year anniversary coming up. What he hadn’t estimated was how difficult it would be, even with using modern parts for some of it.

When Richards built the trike for Hart’s project, he made the frame first—faithful to the original being a conversion—before using a Maxus battery to power a fairly standard e-bike motor. Maxus is an electric van company that decided to back the project, which included providing its own vehicle as transport for the trike to and from Paris, after regular automakers were less interested. The trike’s motor sits almost in the larger wheel, delivering power via a simple chain drive.

When I stepped off a train to have a look at it, the trike was fresh off its own transport back from France. Which leads me to ask: Have you ever been properly scared by a bicycle? I have, now. 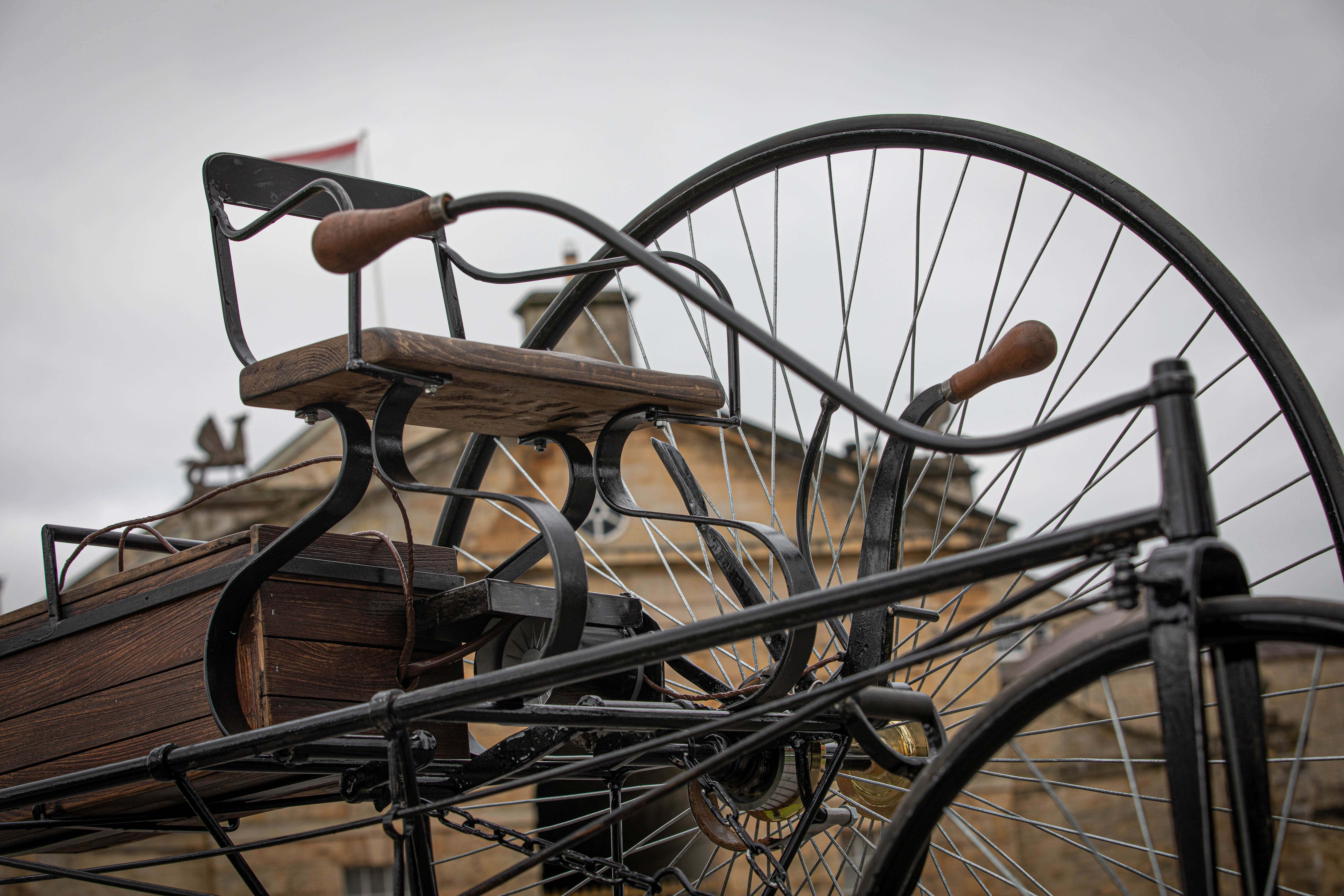 I’m maybe not the most athletic journalist, especially after spending a year in enforced lockdown, so clambering into the seat was a pretty ungainly affair. I’m very grateful Hart didn’t laugh at me too much over. At five feet and 10 inches, I’m not especially short but still had to haul myself a good six inches up into it, putting me well above a car or modern bicycle’s ride height. In the 1880s, of course, people were used to horseback so this probably felt like a dangerously low sitting position. They also presumably had slimmer hips than me because staying in the seat was quite challenging and definitely felt like I could have fallen out of it at any second.

In terms of control, it’s very simple. The replica’s designers recreated what looked like the steering and accelerator controls on the one existing image of the original trike. There’s one lever to steer the thing (the long one in front, in the picture above) and another to ease the vehicle forward as the accelerator.

You perch your feet on a bar to avoid the flailing pedals and use the steering handle and brake (the handle in the rear of the picture above) to hold on. Obviously, this isn’t how the chassis was even intended to work because it’s supposed to be pedaled, so there’s a sort of direct conflict between the number of handles available to you and the number of hands you actually have—you have to use your left for both the brake and the accelerator. 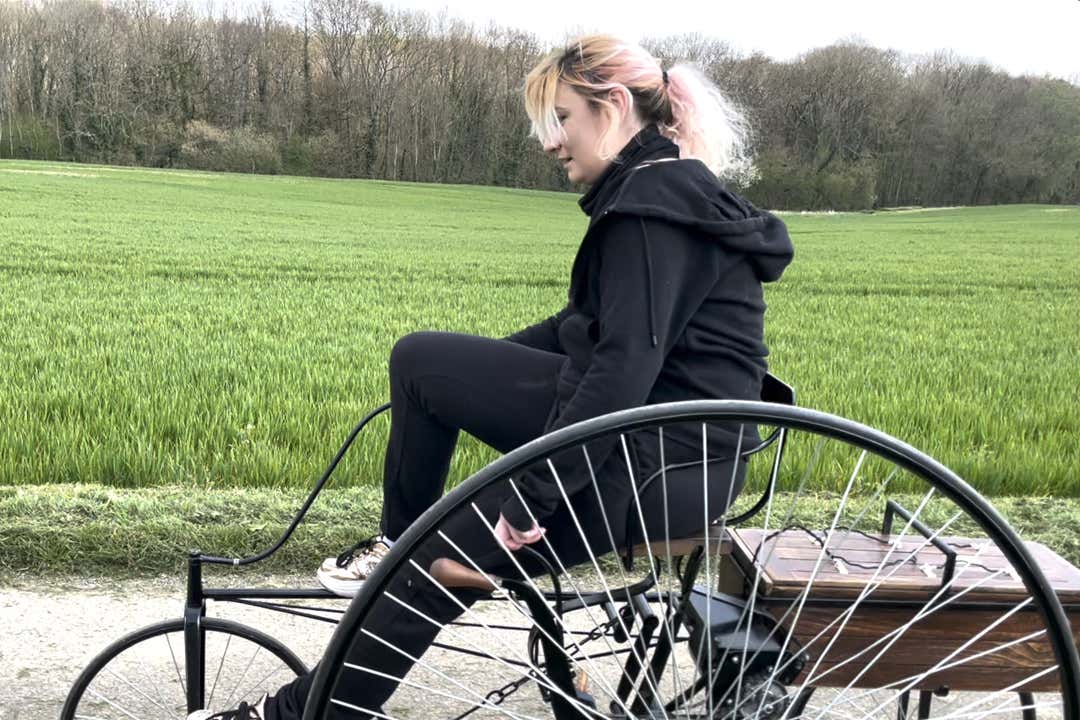 You can see I’ve got my left hand around the accelerator here, which is a smaller handle than the brake.

The first thing that goes through your mind is, “What the hell was anyone thinking, doing this?” Yes, this time I knew that the battery was actually very unlikely to catch fire and the vehicle had been properly engineered for this, but there was just something incredibly insecure about being on a small seat above a vehicle you don’t totally feel like you’re in control of.

Since the tricycle was authentically replicated, it had wobbly, slim wheels and hard rims—no real tires. So when you add a little bit of electric torque to it and things start moving, they feel like they might get away from you. The speed of acceleration, driven by that large wheel, feels a lot faster than it is and like it could just keep going until it throws you into a ditch. After a few minutes though, you get the hang of it. The system’s simple and it doesn’t really need a brake, although it has cushy leather straps as brake pads, that make a shushing sound when activated.

That was the only cushy thing, though. Not big on heated seats, the 1800s. But the steering was incredibly responsive, turning both wheels on the two-wheeled side of the trike in a quick way I didn’t totally trust the single, larger wheel to respond to.

The top speed is about three mph—which feels like plenty from the driver’s seat. Aside from being pretty unfamiliar as a vehicle (when Hart described it to me, I was not imagining an asymmetrical wheel layout), the trike felt both a little bit overpowered and slightly fragile. The slim frame is built perfectly and has unbelievable balance, thanks to Richards’ incredible craftsmanship. But the point of this vehicle obviously isn’t performance. That wasn’t even the point at the time.

Rather, it’s proof of possibility. The guts—or naïveté—it must have taken Trouvé to decide to casually put the electric trike together are unreal, but it’s also incredibly impressive to see the history of electric vehicles realized again in such an intensely physical way. I was reminded of this every time it went over a small bump.

It’s really easy to think of early EVs as plasticky little city cars or crude experiments like the Sinclair C5. Even getting something from the 1980s to run on battery power alone these days feels like a major endeavor. The stop-start history of electric vehicles over the 20th century—revived at every oil crisis and forgotten as soon as pipelines start flowing again—makes it really easy to forget that electric technology originally appeared as a rival to steam, not gasoline.

So, yeah, I can’t recommend an 1881 Trouvé trike as a daily runaround. It’s got really no storage space and the road legality, I suspect, is kind of debatable. But as a clanking, mildly terrifying piece of suck-it-and-see impromptu electric vehicle history, it’s an extremely special thing. At a time when the only vehicles moving under their own steam were, well, err, literally using their own steam—think great steamboats and huge steam locomotives—this would have been an incredible piece of nippy engineering.

And it still is, honestly. While I’d need more than a short trip where I tried not to break any bit of it (and mostly succeeded, sorry Jeremy) I found I was kind of sold on the trike element by the time it was over. Compared to riding a regular bike, it offers a more refined sitting position; you’re upright with incredible views and—steering lever in one hand, accelerator the other—you can’t help feeling like you’re having an extremely great time. Like driving a vintage car that forces you to sit properly and peek over the bonnet rather than slumping down to gaze out the windshield, there’s something very Mary Poppins about it all.

Yeah, I do whale on electric SUVs taking up the whole road but turns out a tricycle with the ride height of a Hummer makes you feel extremely Fancy™️. 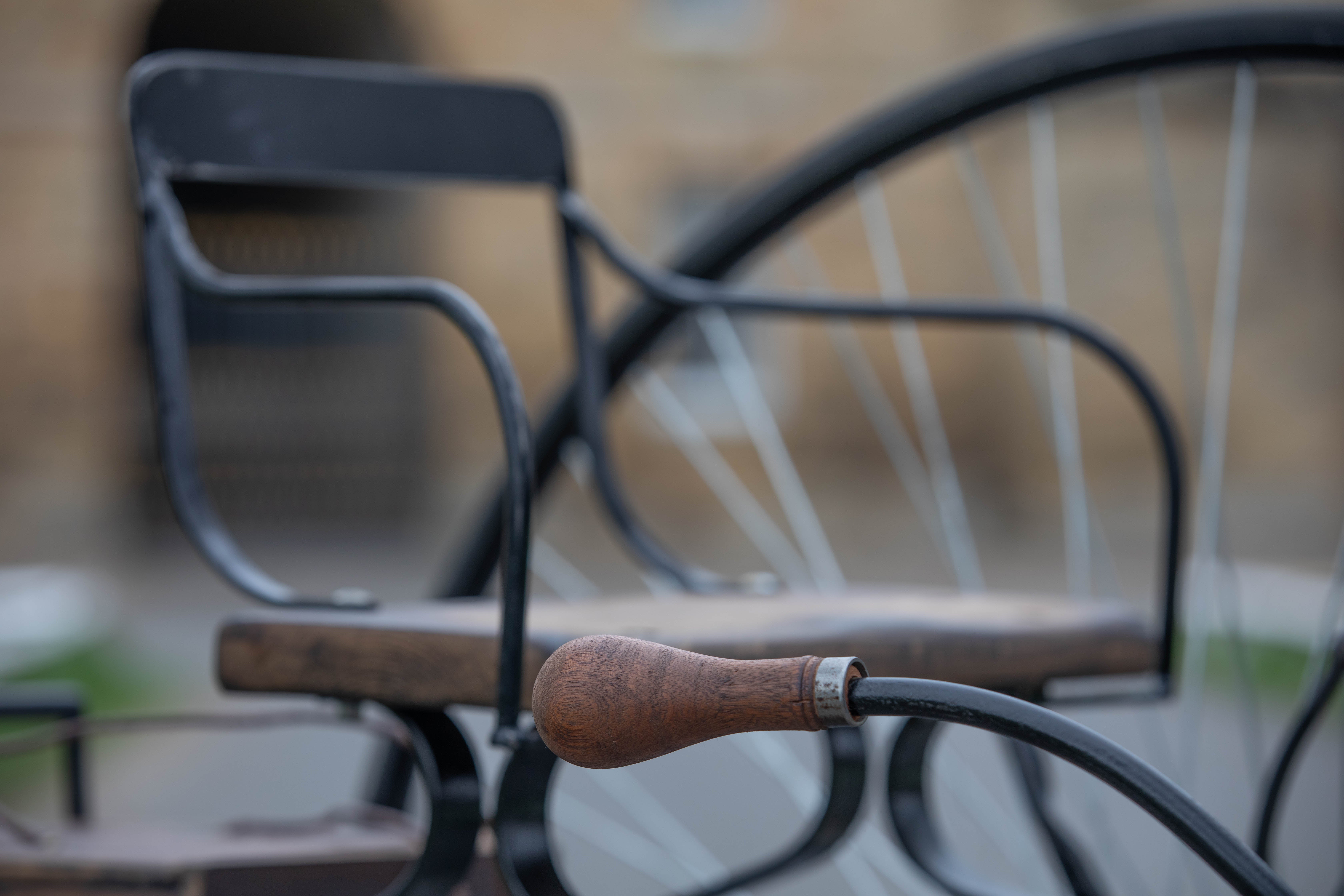 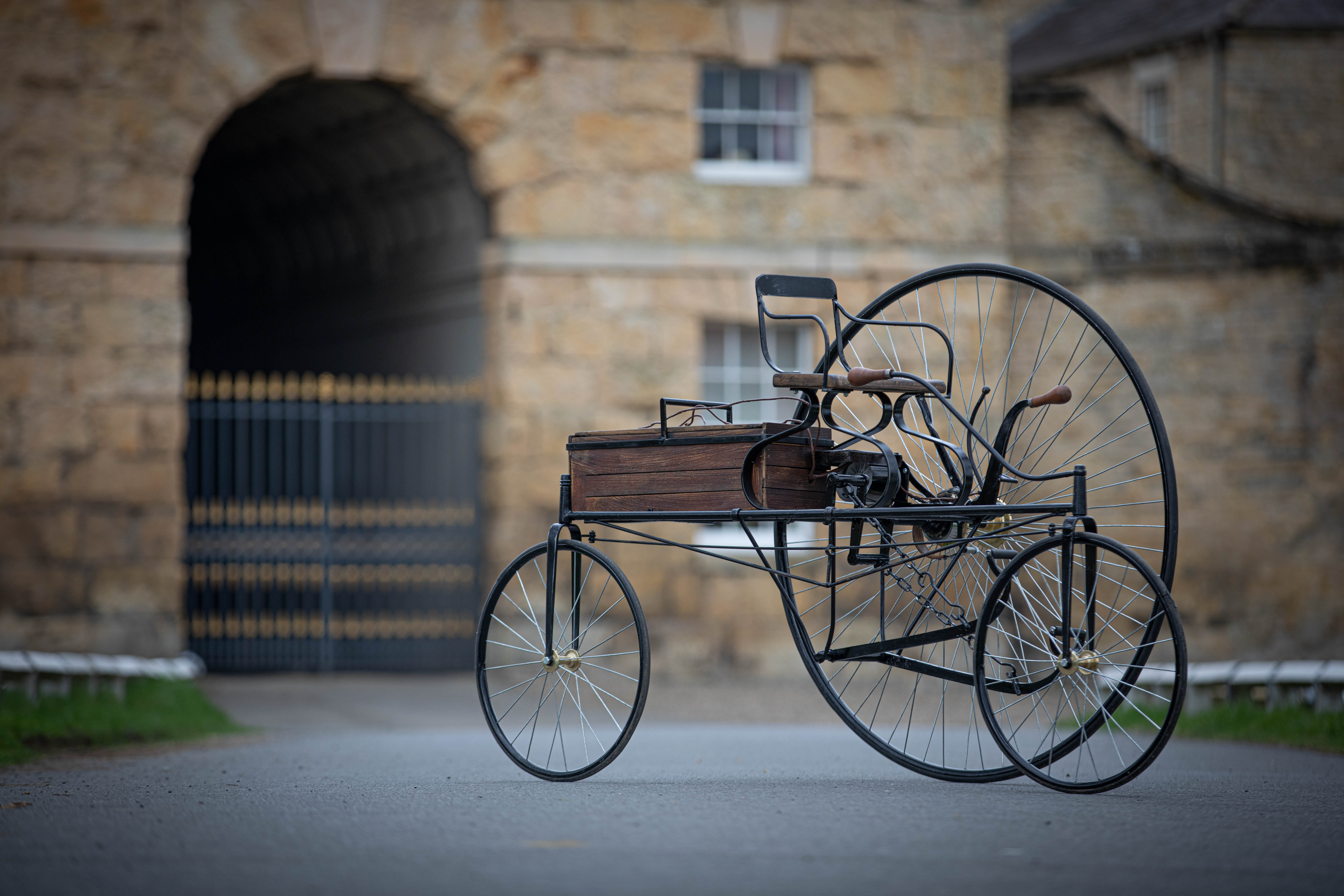 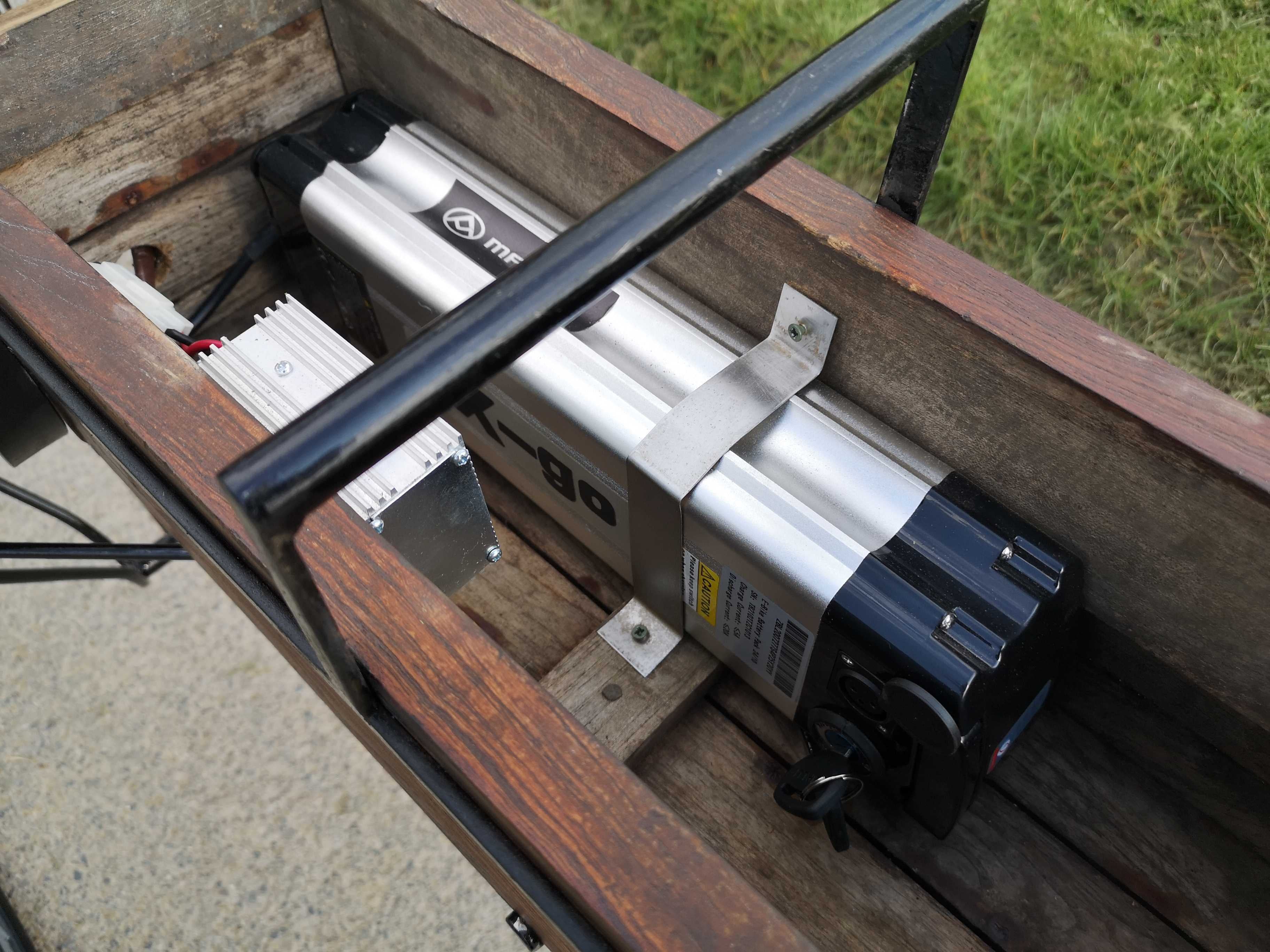 Got something old and weird and want someone to drive it? Mail me at [email protected]