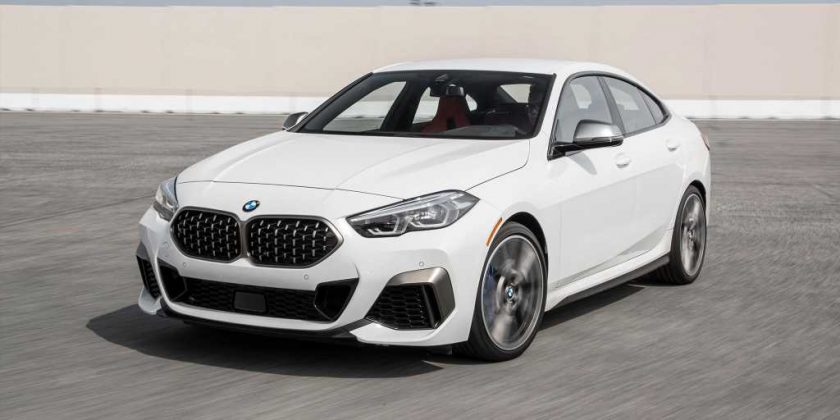 The 2021 BMW 2 Series Gran Coupe is the Bavarian brand’s newest and least expensive sedan, slotting right under the 3 Series sedan. Unlike most BMW sedans, however, it rides on a front-drive-based platform —the same one as the X1 and X2 crossovers (and the Mini lineup), giving BMW buyers yet another choice if they’re looking to spend less than $40,000. The price tag is certainly attractive, but judges at this year’s Car of the Year competition wondered if the funky four-door is befitting of BMW’s roundel badge.

The lineup includes the 228i xDrive Gran Coupe and the M235i xDrive Gran Coupe.  Unlike the X1 and X2, which are offered in front- or all-wheel-drive configurations, the 2 Series Gran Coupe is only available with the latter (dubbed xDrive by BMW), which is fine by us. Pricing for the 2020 228i xDrive Gran Coupe starts at $38,495, which includes standard features such as LED headlights, parking sensors, split-folding rear seats, forward collision warning, and Apple CarPlay—all important stuff to lure in young buyers while also countering the stigma that BMW nickels and dimes its customers for well-equipped cars.

For this year’s competition, BMW sent the top-spec M235i, which packs more features and a potent 2.0-liter turbo-four churning out 301 horsepower and 332 lb-ft of torque. It got off to a good start at the hands of our test team at our figure eight course, where testing director Kim Reynolds had some fun with the four-door 2 Series.

“It turns in very, very well after braking,” Reynolds said. “The power isn’t overwhelming, but it’s solid and pulls strongly. The car has a lightness to it—not a sense of being of inferior construction, but simply being light on its feet. Fun to modify its attitude and rotate the tail on corner exit.”

Judges also gave the 2 high marks for its engine note. “Along with the Acura TLX, this turbo-four is my pick for one of the best-sounding engines in small luxury sport four-doors at around $50,000,” Buyer’s Guide director Zach Gale said.

And although its M-tuned suspension was an asset on the figure eight, most judges felt its overall ride quality needed improvement. Our test car’s 19-inch wheels with low-profile run-flat tires likely didn’t help matters.

“It rides rough over bad surfaces,” senior features editor Jonny Lieberman said. “I think you could dial out some of this harshness and still maintain a sporty enough feel. And this isn’t even the real M version. I’m not sure what’s going on at BMW, but the ride quality seems to be the last thing they’re thinking about. Large bumps really upset the car.” In our eyes, the Ultimate Driving Machine should be enjoyable both at the limit and while cruising the streets.

In addition to the rough ride, taller judges had difficulty sitting comfortably in the driver’s seat. And most judges agreed the rear seats were not only cramped (leg- and headroom) but also awkward to get in and out of.

On the upside, judges praised the 2’s well-crafted interior, soft leather, and clear sound system. The M235i’s as-tested price tag, however, was harder to accept at $50,795—which is more than enough coin to leave the dealership with a decently equipped 330i sedan that’ll deliver better ride quality and more rear passenger room.

Then there’s the matter of styling, which bears little resemblance to the relatively handsome 2 Series coupe or previous BMW Gran Coupes. Although the 228i Gran Coupe has an enticing price tag, so does the X1 and X2. And not only are they better looking, but they are also perhaps better executions of BMW’s front-drive platform.