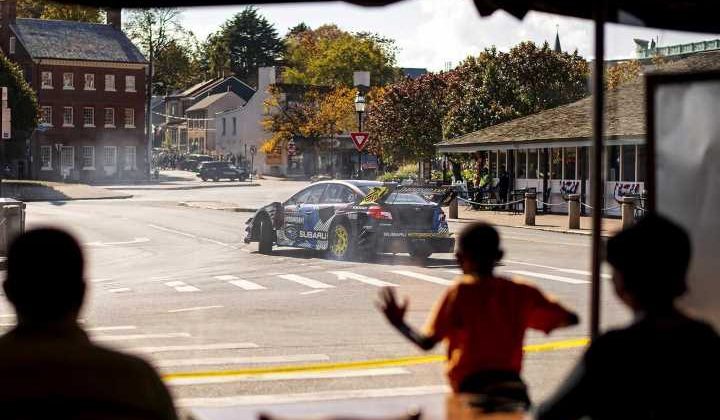 If you were wondering how the Hoonigan franchise could do something different for its next Gymkhana, you might not have considered the swapping of usual star, Ken Block, for his longstanding rally rival, Travis Pastrana. In this new video, the stunt legend borrows Subaru Motorsports USA's custom built Gymkhana machine (in his hometown of Annapolis), which takes the WRX STI rally base and ramps it to an explosive, 862hp specification that's honed for the sort of madness to be featured in this latest Gymkhana.

Drifts, jumps and millimetre precision are all in constant supply throughout, to the soundtrack of a heavily boosted 2.3-litre boxer – smashing into its hard limiter as rubber is converted into smoke and squeals. What makes this Gymkhana so astounding is the daredevil driving style that Pastrana so easily employs. An inch too far or short, and the outcome could so easily have involved a written off WRX, smashed in shopfronts and, god forbid, serious injury.

But, like Block, Pastrana’s speciality has always been in nailing those high-risk scenarios, be it on four wheels or two. Case and point, in this video, our jaws hadn’t lifted off the floor after the opening river jump before Pastrana fully ‘sends it’ backwards towards a brick building, all-four wheels spinning in the opposite direction. He then dips a wheel off the edge of a pier, so the Subaru is part hanging over the actual sea water of an actual bay – Chesapeake Bay to be exact. He then continues the madness with plenty more demonstrations of his talents and barely believable precision, which is emphasised brilliantly thanks to the camerawork of the regular Hoonigan team.

Anyway, we’ll let you see it for yourself in the video. Best sit down, turn up the video definition and put the headphones in. This one’s properly absorbing…