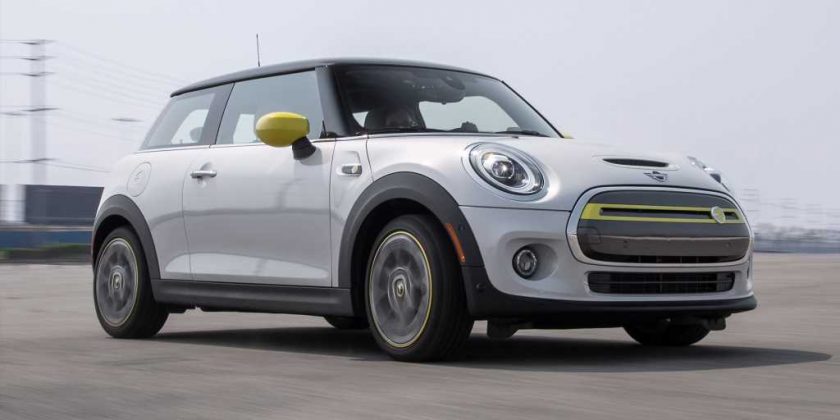 All signs point to the 2020 Mini Cooper SE electric car as being the superior variant of the storied little hatchback. A battery-powered drivetrain should eliminate unwelcome vibrations from the occasionally lumpy gas options, and instant torque should provide a scaled-up electric go-kart experience as suggested by the Cooper S badge epoxied to the hatch. Volkswagen is likely denying us the plug-in hybrid Golf GTE, so this motorized Mini is our best bet for an electro-Germanic hot hatch, right?

Even considering this is now the least expensive battery-powered vehicle on the market, the electric Mini Cooper SE hardtop two-door let me down. Yes, this is an EV with every ounce of retro-modern styling and personality Mini buyers are after, but its flaws are too significant to overlook.

Mini nailed the styling. The new EV is exclusively offered in the two-door hatch body style, which most closely resembles Minis of old and avoids the stretched dachshund look of the four-door variant cramped rear-seat passengers may object. Compared to the market’s alternative affordable EVs—the Hyundai Ioniq Electric and base Nissan Leaf—the Mini might as well be a Jaguar E-Type.

The fancy rolling stock is part of the top-spec Iconic trim that adds a panoramic moonroof, a larger 8.8-inch touchscreen infotainment display, premium Harman Kardon audio, front and rear parking sensors, power-folding side mirrors, and Mini’s head-up display for a cool $7,000 over the base car. Candidly, we’d skip it.

The base infotainment system still offers Apple CarPlay, that panoramic roof encroaches on already limited headroom, and the dash-mounted head-up display projects the same information as the new digital instrument cluster, just a couple inches higher on a piece of Plexiglas (instead of being projected on the windshield like pricier systems). Besides, the Cooper SE is more appealing at $30,750 minus the $7,500 federal tax credit than our example’s $37,750 as tested.

Is the Electric Mini Fast?

Let’s get numbers out of the way. This Mini’s BMW-engineered electric motor develops 181 hp and 199 lb-ft of torque, just shy of the power ratings of a turbo-four Cooper S. Take it to a dragstrip, and the Cooper Electric will accelerate from 0 to 60 mph in 6.0 seconds and through the quarter mile in 14.7 seconds at 91.7 mph. The EV is quicker in the sprint than any Cooper S we’ve tested, although the gas car matches the electric’s quarter-mile time at a higher trap speed.

Our figure-eight test, which evaluates acceleration, braking, and cornering, exposed minor drawbacks. Although the electric variant beats a gas Cooper S off the line, the EV’s 26.9-second lap at 0.64 g is bested by the standard Cooper S’ 26.4 seconds at 0.69 g. Additional weight detracts from braking and cornering performance. That being said, it’s worth noting that the battery-powered Mini out-accelerates and boasts a quicker figure-eight lap than every electric under $50,000 outside a Tesla Model 3.

Remember when I said this is the least expensive EV on sale? That accolade comes with a catch. The Mini’s 32.6-kWh lithium-ion battery can propel the little electric just 110 EPA-rated miles on a single charge, fewer than any other electron-motivated vehicle on the market. At 108 mpg-e, it’s also the least efficient EV on the market, outside the performance-oriented Porsche Taycan.

Had the Cooper SE debuted five years ago alongside cars like the original 83-mile Volkswagen E-Golf or the early 81-mile BMW i3, 110 miles might be impressive. Compared with modern low-cost electrics including the 170-mile Hyundai Ioniq and the 149-mile base Nissan Leaf, the Mini’s range is something of an embarrassment.

Thankfully, with the right charger, the Cooper SE will charge pretty quick. Standard Level 2 public charging can restore the battery to 100 percent in four hours, but if you can find a Level 3 DC rapid charger, the Mini can charge at a rate of 50 kW and restore 80 percent of battery capacity in 40 minutes. As with all EVs, charging slows as the battery reaches its full capacity. The higher-trim Leaf SV can match it, and although the Ioniq can charge at a faster 100 kW, quick-charging the Hyundai’s larger-capacity battery to 80 percent takes 54 minutes.

Charging at home, your best bet is to install a 32-amp Level 2 home charger that can fully restore the battery in four hours. Charge time inflates to eight hours on a 240-volt power supply (the sort that powers your dryer) and 24 hours if you plug in to a standard 120-volt house outlet.

BMW’s house-built electric motor is immediate and frictionless; there’s no hesitation while the car searches for the proper gear or spools up its turbo, you just go. In place of a tachometer, a power gauge lit by 10 LEDs displays the percentage of available power the motor is delivering. In that instantly torquey, electric car kind of way, I regularly found myself whacking the accelerator and swinging the power gauge toward 100 percent.

Yes, the electric powertrain is smoother and has fewer moving pieces to keep this Mini from rattling itself apart, but the suspension might. Ride quality is firm, possibly a consequence of the taller springs and shocks borrowed from the Mini Countryman and Clubman to account for the battery’s additional weight and need to maintain ground clearance. (The EV’s 3,085-pound curb weight represents a 350-pound disadvantage compared with the last two-door Mini we tested.) Gut jiggle and head toss will plague all passengers, even on smoother pavement.

The cabin is also much louder than you’d expect of an electric. Of course, the powertrain itself is near silent, but tire and wind noise persist even at sub-highway speeds. Were I allowed a passenger in the seat beside me, I’d have had to raise my voice to be heard.

Is It Any Fun?

When it came time to ascend the coiled asphalt leading up Mount Baldy, I was ready for the Mini to impress. Sure, it’s a little stiff and noisy, but it’s quick, too, and those are traits I’d easily forgive in an engaging hot hatch. The first thing I noticed was grip, or lack thereof. There’s next to no body roll here, but audible protest screamed from the wheelwells at the slightest hint of cornering enthusiasm, and vicious understeer revealed itself as the default handling state.

That said, this electrified Mini is better balanced than the standard car, with 54/46 front-to-rear weight distribution instead of 68/32 in a Cooper S. There are a couple degrees of lift-off rotation to explore as the regenerative braking lightens the rear end, but vague steering robs any semblance of confidence. I’d draw comparisons to a video game, but even my entry-level racing wheel offers more consistent feedback.

The second bit that crossed my mind was that I was driving rather slowly. I knew the Mini wouldn’t feel as quick while fighting a steep uphill grade, but I was struggling to keep up with the Prius ahead of me on the straights. As I pulled off to create some distance for quick cornering, the issue became immediately apparent.

Remember those little LEDs alongside that power gauge? Just five were lit, meaning the Mini was only delivering half its available power output. (Testing director Kim Reynolds encountered a similar issue after two laps of our figure-eight course.) Allowing the powertrain a moment to cool down restored the power cap by the time I reentered the road, but I can’t call this car a hot hatch if it gives up half its grunt after less than a mile in the twisties.

I will say I love that Mini offers two levels of regenerative braking. Selectable via a toggle switch just left of your passenger’s knee, the lighter setting mimics regular engine braking; you can coast and creep as if you were driving a standard Mini. The stronger regenerative braking setting (which we prefer) enables true one-pedal driving capability, wherein lifting off the throttle initiates strong deceleration that you can fine-tune within the top inch or so of pedal travel. Smoothly coming to a stop without touching the brake is a fun and engaging little metagame.

This car will work for some people. Not only does it provide superior performance and a lower price point than its two closest competitors, the Cooper Electric looks and feels like a Mini. Fans of the automaker who already have a reliable road-tripper in the driveway won’t mind the limited range and will smile every time they walk up to this car or experience its quick, effortlessly smooth powertrain.

But I can’t recommend the Cooper SE. It’s loud, stiff, it can’t sustain full power for very long, and it offers fewer miles of range than fellow staffer Alex Leanse can cover on a bicycle. It is not the confidence-inspiring electric hot hatch I had anticipated. Instead, it’s a style-over-substance, disappointing glimpse at how great an electric Mini could be.