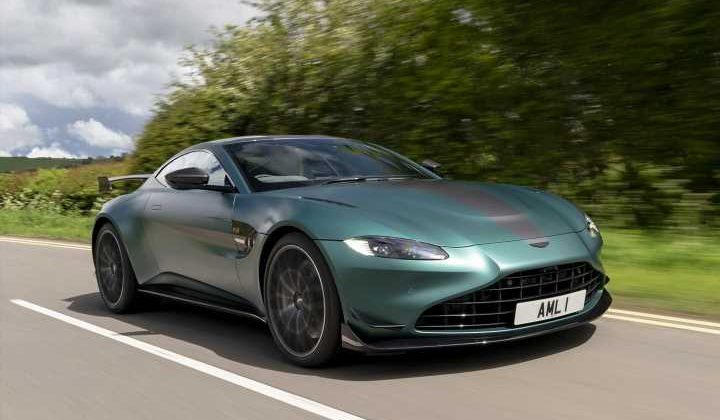 There’s a form book when it comes to the Aston Martin Vantage, stretching back to 2005. Specifically, it’s that the first one is far from the best one, the car getting incrementally (and significantly) better as time passes. For that original model, it came with cars like the 4.7-litre facelift, Vantage S and N430, the potential of the Vantage eventually realised a few years after launch. It looks like the same may well be true for this Vantage F1.

Because while the 2018 Vantage impressed at launch, verdicts were a little less effusive back in Britain. It was surpassed – if narrowly – by a 991-era 911 on the eve of its replacement in a PH test, and nothing that followed – models like the AMR and Roadster – has really looked like changing that ranking. Until now.

The F1 is as much about what hasn’t been done as what has. This isn’t a limited-edition Q Division special with 800hp; the F1 is a series production Vantage, with just 25hp more than standard (so 535hp in total) and available from £142,000. Underneath it’s been overhauled for improved track performance, meaning a host of tweaks that can’t be seen and that won’t grab the attention on social media, but ought to impart meaningful change to the driving experience. Things like increasing structural stiffness to the benefit of steering, reworking the damper internals for better body control, and adding a fraction more rear spring rate. None of those things will sell the F1 to the average supercar buyer, yet they point to a thorough dynamic revision of a car that was already pretty well sorted. Apparently, Tobias Moers wanted significant performance enhancements without compromising the Vantage on road. A tough ask for anyone.

Which you’ll be earnestly pondering, right up until you see the F1. Because, yes, maybe the spoiler is a bit much (just think of the downforce!) and the stripe unnecessary, but what the pictures don’t convey is the stance and the attitude of this new Vantage. This is the first time the car has been on a 21-inch wheel, and if the suspension hasn’t been lowered with the revisions, then the larger rim and lower tyre profile (of a bespoke P Zero) certainly deliver the impression that it has been. The F1 hunkers down far more purposefully than the standard car, setting just the right tone.

The interior, sadly, remains off-key; there are too many buttons, the screens aren’t high-res enough and the F1 badge looks a bit silly, like a chief exec in the branded cap. Hopefully you already knew that about the Vantage, because it’s been a demerit since 2018 – and some nice Alcantara touches here don’t rescue it. The cabin of the current Porsche 911 is in a different league.

Fortunately, the Vantage F1 is such a well sorted sports car that concerns about the interior (mostly) melt away. Just ensure to set everything – temperature, entertainment, navigation – before setting off and you’ll have a tremendous time. With the predictable caveat that there wasn’t a standard Vantage alongside (and without having driven one since football was last coming home), this feels like comfortably the best version of the 4.0-litre Vantage that there’s been.

It is evident immediately. The steering has always been fast, if not the most confidence inspiring with that huge nose darting about, but this feels much better; still sharp away from the straight ahead, only now with a pleasing level of resistance. With additional lock and speed comes greater faith in the front end, primed with a level of consistency that makes the Vantage satisfying in a way it arguably wasn’t before. Given the ultimate purchase the front Pirellis have (considerable), it’s good to have that trust. And even at less than ten tenths, benefits are felt across the board.

This is certainly a tauter Vantage on the road, though it’s a mark of the development team’s work that the F1 – with its circuit remit and 21-inch wheels – is never uncomfortable. Alright, ‘Track’ on the dampers is predictably tense, though it should be noted the Aston never crashes through imperfections. You’ll just know if you ran over a two-pence coin or a two pound one. On road, the standard Sport setting is just fine, accommodating for big miles but strict enough to keep the chunky kerbweight tightly marshalled as the steering flits you this way and that. ‘Lotus’ is inevitably trotted out in new Aston stories now given Matt Becker’s involvement, and that would be a stretch for a 1700kg car on 21-inch wheels, but there’s considerably more composure than the updated stance might lead you to expect.

If there’s any discernible performance difference between a 535hp Vantage and a 510hp Vantage, then it’s very hard to put your finger on it. Which is no bad thing, really, as the smallest Aston was already plenty quick enough. In fact, the F1 is a nice reminder of just what a good fit the AMG 4.0 is for the Vantage, bristling with power and intent. It hauls from low revs, pulls at high ones, and never leaves the driver in any doubt about just what’s powering the car, booming V8 thunder always close by. In truth Track might bring a little too much boom, if you’re inclined to look unfavourably on exhaust pyrotechnics. Probably we should just be grateful of a V8 at all, although Sport or Sport + certainly feel like a more appropriate blend of internally combusted fury and public decency.

All told it makes for a great Aston road car, one not relying on extra power to grab your attention but rather a more subtle appeal through meaningful chassis upgrades. Put simply, the F1 manages to up the precision, feedback and enjoyment while only being a tad heavier than standard – a laudable achievement.

It’s a tangible improvement on track, too. Testing the Vantage on Silverstone’s Stowe circuit is like showing off an A380 from Gatwick to Glasgow, but there’s no mistaking its higher limit. The F1 both understeers and oversteers later than the standard car, yet more progressively as well. The uprated front end can really be lent for good corner entry speed, and the rear axle feels better connected as well, meaning you’re happy to work the limit of either end. Certainly the chassis gives the driver options, which is exactly what you want for a track car – prescriptive gets boring. The engine is a willing companion in its adaptability, and the brakes are mighty, full of feel and power. The only slight letdown on track might be the eight-speed auto which, despite revisions, can’t quite match a dual-clutch for immediacy either up or down.

Still, that isn’t enough to hobble the F1. Those previously happy to buy into the Vantage knowing its flaws (the interior and the visibility, most notably) will love the new caddish attitude, especially as it comes with a welcome shot in the arm dynamically. It may well be good enough to convince a few that those issues are worth putting up with, such is the quality of the driving experience. Anyone that feels a modern sports car lacks a sense of occasion owes it to themselves to drive an F1 Edition; those concerned that the brand is more focused on SUVs and electrification will find a great road and track Aston Martin here. It really is hard to imagine how a Vantage with this architecture and this powertrain could be any better for job it’s built to do. But then this is Aston, and it wouldn’t be the first time…