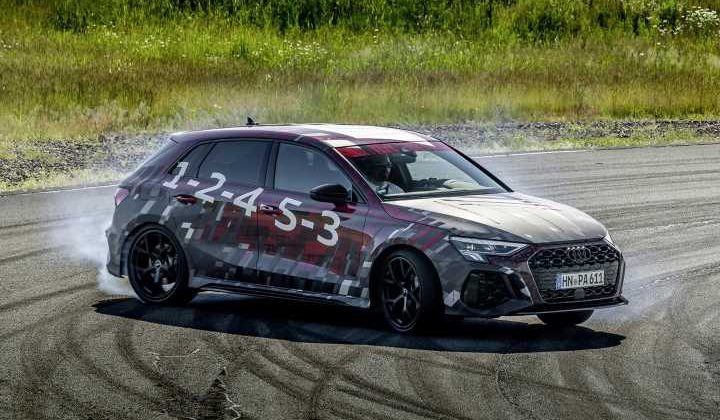 Thought you knew what to expect from a 400hp Audi hatchback? Think again

Precious little has changed in the make-up of an Audi RS3 over the past decade. Some might reasonably argue nothing needed to. They remain, after all, very popular cars, with even the earliest ones still commanding £20k. It seems the British buying public can’t get enough of an A3 with that turbocharged inline five-pot upfront and a broader, stiffer Quattro chassis to make the most of it.

This time around though, Audi is doing things a little differently. The engine remains (of course) and plenty of the trademark RS aesthetic is visible even through the disguise, but this RS3 promises to be the most rewarding one yet to drive. Which the cynical might say wouldn’t be hard – but this isn’t just going to be better by a little bit. Its maker claims the new RS3 “represents the epitome of unadulterated driving dynamics.”

To back up that grand claim, Audi has equipped its latest A3 flagship with an RS Torque Splitter, as smokily evidenced in the pictures. Essentially it’s the torque vectoring back axle utilised so successfully by the new Golf R, with clutches on the rear drive shafts to direct torque either side. Though the hardware is identical, Audi has recalibrated the Torque Splitter software for this application, ensuring “optimal stability and maximum agility” in fast driving.

Plus, of course, it’ll do big skids. Which is probably not something we ever expected of an RS3. But here is a transverse-engined Audi that can send all of the engine power to just one of the rear wheels, for controlled drifts on closed roads. Or being a lout on the big Tesco roundabout. Using the RS Torque Rear drive mode Audi has configured a “highly rear-heavy distribution of the rear [which] leads to oversteering behaviour”. In an Audi RS3, the car renowned for a marked aversion to any apex (at least in its earliest guise), that’s quite the promise.

There’ll be plenty of motive force to agitate that axle, too; if the Torque Splitter isn’t typical Audi fare, then loads of horsepower is a guarantee. Once again powered by the 2.5-litre, five-cylinder turbo – and without any electrical assistance – this RS3 is actually no more powerful than before at 400hp, indicating that we may just have reached the ceiling for these mega hatches. It is still faster, though, with a tad more torque (now 369lb ft, from 354 before) all the way from 2,250-5,600rpm and a “sportier gear ratio spread”, the RS3 should reach 62mph in just 3.8 seconds, down from 4.1. There are three different top speeds, too, depending on how much money you hand over. As standard the maximum 155mph, optionally it’s 174mph, and with the RS Dynamic package and ceramic brakes, buyers will have a 180mph RS3 on their hands. Which is fast even by fast Audi standards. The seven-speed DSG has seen before is once again standard, with “lightning-fast starts and heart pounding acceleration.”

To harness that performance, and to make the RS3 rewarding in all driving up to and including lurid oversteer, the chassis has been significantly revised over the standard car. Even over an S3, in fact. This car sits 25mm lower than a regular A3, with a “markedly stiff” passive spring and damper set up, albeit with a valve system in the damper that assists compression and rebound; the subframes, roll bars and lower wishbones are bespoke to this car, with one more degree of negative camber than standard as well. RS-specific progressive steering is also fitted.

Standard drive modes are Efficiency, Auto, Dynamic, RS Performance and RS Torque Rear, with everything from front axle priority for the power to “neither understeer nor oversteer” in Auto to the rear-biased RS modes. Don’t forget, too, that all of the dynamic technology will be marshalled by the Vehicle Dynamics Manager – or mVDC, modular vehicle dynamics controller, in Audi speak – that’s proven so effective in the Golf GTI and R at extracting maximum performance. Audi says the system further improves agility for the RS3, and it’ll be fascinating to see what can be achieved with 400hp doing the pushing and pulling.

The optional extras so far confirmed for the RS3 signal a more focused remit for this car than ever before, including RS sports suspension plus with adaptive dampers (including a Nordschleife-specific setting) and Pirelli P Zero Trofeo R tyres. Might this finally be the RS3 that really appeals to a keen driver as well as the Audi faithful?

Though the full reveal is still a month away, these new technical details will surely give considerable cause for encouragement regarding the latest model. The concept has always been easy to admire – epic powertrain, all-weather ability, Audi quality – even if the execution hasn’t ever captivated the enthusiast audience. Fingers crossed this is third time lucky for the RS3.