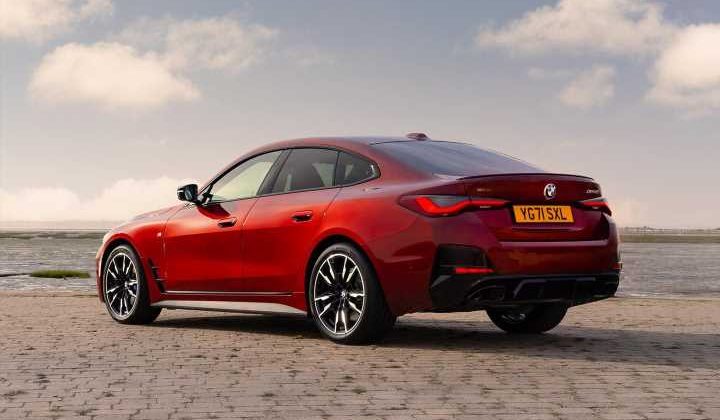 Another 40i derivative, another BMW bodystyle – another great sports saloon

As BMW continues to diversify – we’ll deal with the Concept XM soon – so the appeal of a more traditional offering is likely to appeal to enthusiasts. To us, and hopefully to you as well, a traditional BMW has six cylinder, four doors and rear-wheel drive. That simple recipe, with minor variations, has unarguably delivered some the world’s definitive sports saloons over the decades. Consequently, the M440i xDrive, while not quite ticking every die-hard purist box, feels about as old school as a new BMW can be. And that’s absolutely a good thing.

Alright, so it doesn’t quite look like a typical BMW saloon. The Gran Coupe body has proved popular since its introduction with the old 6 Series, offering four-door practicality with swoopy coupe style. The old 4 GC was very nice, as is the current 8 Series… this one perhaps isn’t quite so great. You know why. The rear end lifted from the two-door 4 Series looks good, the profile is smart, the details – the wheels, Cerium Grey accents, twin exhausts and so on – all nicely judged. It’s just the snout. Where the oversized aggression is possibly beginning to suit the M cars, it still looks a little OTT for models further down the range. It isn’t what would be called a dealbreaker, though it remains noticeable. And the story would hardly be complete without a mention.

If the grilles are a familiar demerit, then almost everything else about the 440i is assuredly top drawer. This current generation of BMW interior, to this tester at least, is almost beyond reproach. Sure, the dials remain naff and the steering wheel overly plump, but there’s precious little else to grumble about. The driver sits low in great seats, its touchscreens and buttons are combined seamlessly, the displays are large and vivid, and the quality and sense of occasion tangible – it’s a really lovely driving environment.

The M440i xDrive Gran Coupe uses an identical powertrain to the other 40i cars in the range, from new M240i to 4 Series convertible, with 374hp and 369lb from a mild hybrid straight-six turbo. If more complex than ever, the age-old BMW charm is present and correct: the 3.0-litre is smooth, responsive, sweet sounding, and bolstered here with the MHEV tech to eliminate any lag. From 1,500rpm all the way to the 7,000rpm limiter the 440i delivers effortless performance, working seamlessly with an eight-speed auto that makes the old ZF (once class-leading) seem a bit dim-witted. It’s a really high-quality powertrain, and faster than you’ll probably ever need.

As befits a car of its billing, the Gran Coupe is a supreme cruiser, plush and refined when the situation requires it, and easily able enough on a motorway to (again) raise the question of why you’d want anything more powerful or expensive. It hardly drops the ball away from the three lanes either: the M440i is as precise, rewarding and assured to drive quickly as we all expect from a compact(ish) BMW exec.

The grievances that may have once cropped up around the more powerful 3 and 4 Series models have largely been addressed with this generation. Comfort is no longer blighted by sloppy damping, Sport is no longer unbearably stiff, and Eco Pro is actually a usable drive mode as opposed to a torpid setting to crawl to the petrol station. The M440i can be ramped up to Sport Plus, too, and not lose all its plushness, yet still feel appropriately dynamic for a near-400hp BMW in Comfort. Adaptive, as elsewhere, feels a good catch-all setting for most situations.

Though 1,825kg (or 1,900kg once a driver gets in) is not a slender kerbweight – in fact it’s just 20kg less than a 3 Series Touring, or 85kg more than two-door – the Gran Coupe does a fine job of managing that mass. After however many years of whinging about M Performance cars delivering sub-par wheel and body control, this latest generation is much more impressive, dealing authoritatively with surface changes despite gaining weight. Ultimately, it means more speed can be carried more confidently, the driver able to appreciate the relative keenness of the front end and lovely balance without being distracted by the persistent brittleness that used to persist. Even lacking the fancy tricks of the M3 and M4 xDrive, this M440i feels more than rear-driven enough for its position in the range – think abundant traction, but not without a sense of humour if you go looking for it.

Sounds good, right? It ought to really: bringing together all that’s likeable about modern BMW (aside from the grille) with classic straight-six muscle, makes the GC an easy win. Cheaper than the convertible, more practical than the two-door and probably more interesting than the 3 Series, the M440i is a fitting flagship for what’s proving to be an impressive 4 Series lineup. With an objective hat on, you might struggle to justify the premium over the also very good M340i saloon, but the fact remains that the top-of-the-range Gran Coupe is a great six-cylinder BMW and a fine option at £60k. The only real pause for thought is the prospect of an Alpina Gran Coupe arriving next year. We wouldn’t bet against that being superb.