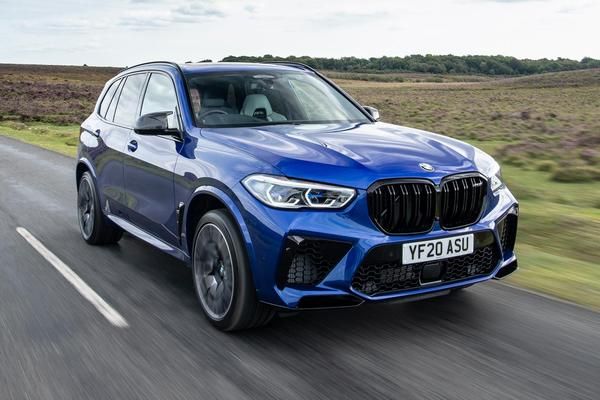 625hp from an M5-derived V8 and rear-biased all-wheel drive. An X5 to finally get onboard with?

In the preposterous-by-design world of super-fast SUVs one should be cautious with accusing a car of taking things a step too far. But the last generation X5 M was arguably guilty of the distinction. It appeared to tick all the boxes – with the 575hp S63 4.4-litre V8 aboard it was the most powerful all-wheel drive BMW of its time – but the manufacturer had overdone it with the chassis and it didn’t ride right, certainly not on British roads, where real-world usability took a hit compared to the model’s direct rivals.

It’s the latest G05-generation X5 M’s job to make those shortcomings right. It borrows the engine from the current M5, and comes exclusively in Competition format in the UK. Naturally a 2.3-tonne SUV brings with it the normal engineering challenges, but the uprated 625hp 4.4-litre V8 and standard-fit adaptive damping are a good place to start. As is the deployment of an Active M differential at the back, which ensures that the xDrive all-wheel drive system provides a rear-biased power delivery duly enhanced in ‘4WD Sport’ mode.

The X5 M also gets active anti-roll stabilisation, M-tuned variable steering and a brake pedal offering two modes of feel, just to hammer home the performance credentials. Moreover, it claims better comfort and practicality thanks to a larger, stiffer platform. The new model is handsome too; especially when measured against the mechanically identical X6 M.

Inside the styling is recognisable as BMW’s top-grade digital architecture, the central tunnel and gear lever migrating from the M5, alongside supportive but not overly firm sports seats. There’s plenty of adjustability and good visibility all-round, so guiding the 2.0-metre wide X5 through Oxfordshire is a largely stress-free process, helped no end by the 553lb ft of torque the engine develops from low revs. It’s a shame then that 21-inch front and 22-inch rear wheels don’t exactly help with the X5 M’s familiar drawback: the suspension never seems to relax quite like it does in the saloon. True, it never registers as uncomfortable, but you end up being thankful for the extra cushioning BMW has plumbed into the seat as you’re occasionally bounced or jiggled by the chassis.

It doesn’t settle down much with speed either, meaning that any drive setting above ‘Comfort’ is pretty much redundant in this country. Predictably, lateral control is good in all settings, so you’re never really wanting for more aggression in corners anyway. Fractious ride or not, the car delivers tremendous cross-country pace. The variable steering feels pretty natural, too, albeit with no real feel. Not that you need it, the feedback would merely tell you what is patently obvious: the X5 M’s limits are far higher than any sane person would feel the need to explore on the road.

As it is meant to, that makes utilising the enormous bandwidth of performance provided by the engine, and its unflappable eight-speed automatic, all the more convenient. Heavy mid-corner throttle applications never want for traction and the V8’s deep-throated shove and blurred gear changes are reliably addictive. The brakes are mighty too, although you’ll struggle to really feel the differences between by the pedal’s two settings. In both, there’s good modulation and a strong resistance to fade, which is all you can really ask for in a 2.3-tonne SUV.

BMW’s ‘4WD Sport’ mode does embellish the car’s ability to rotate under power, but only within a narrow window before that buttoned-down, unrelenting mechanical grip takes over. The default balance, though, is admirably neutral. It’ll push slightly on the front axle if you mix high speed with brisk steering inputs – as you’d expect given the heft of the thing – but only briefly before the tyres dig in and the rears dutifully follow. Make no mistake, the X5 M offers more point-to-point, real-world performance than you’ll ever be able to consistently tap into.

It’s a shame, then, that in the lesser moments it doesn’t flow with more consistency. On anything less than perfect tarmac, the X5 M’s enormous potential is a secondary concern behind the corrections you’ll need to make its line. It is an improvement on the old car – PH didn’t develop a headache for one thing – but you do start to wonder if the less powerful model might have offered a better ride and handling compromise than the Competition delivers. BMW’s contender is ballistic, but fails to challenge the sophisticated benchmark set by the Cayenne GTS earlier this week.

Still, it covers the bases more adequately than its predecessor did. It’s cleverer, more drivable and it would be churlish not to laud the level of performance on offer. It looks the part, too, and conjures up that quixotic feeling of invulnerability to the conditions which makes a fast SUV worthy of consideration. It’s abiding problem – and this cropped up last time around – is that all of its direct rivals at beyond £100k manage much the same road-crushing capabilities without feeling the need to sacrifice occupant comfort along the way. The G05 generation has reduced the level of forfeit required, and delivered yet more forward speed to boot. But it’s still the OTT option.