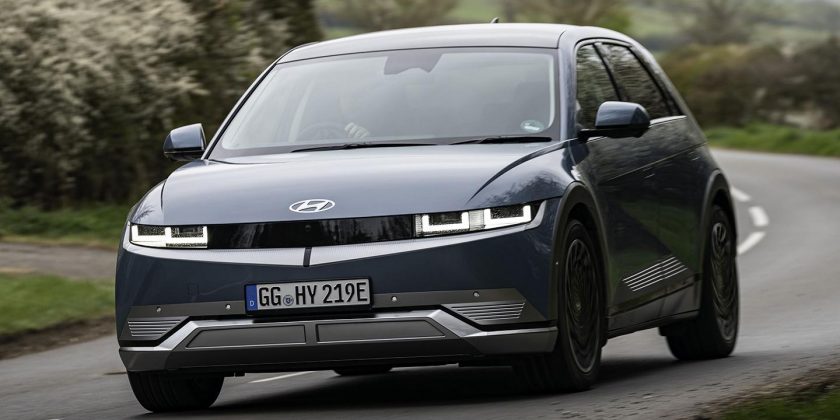 Beyond the whole charging rigmarole, what holds electric vehicles back? Some might say very little, others might cite desirability. However good a car is and ecologically sensible the purchase might be, the car buying decision is so often emotionally driven that objective criteria go out the window. And, put simply, some EVs are just a little worthy and white goods-like for their own, er, good. This fact is not lost on the manufacturers, which is why plenty now exist to buck that trend; cars instantly covetable in their own right, where electric power adds to the appeal – rather than defines it. Think Honda e, Jaguar I-Pace, Polestar 2 and so on. The Hyundai Ioniq 5 is another for that list.

Launched earlier this year and arriving in Britain very soon, the Ioniq 5 is pitched by Hyundai as a midsize CUV (crossover utility vehicle), characterised by “progressive design” that “represents a departure from past norms, exploring a new design freedom offered by a dedicated BEV platform.” Which sounds terrible, right? Every 2021 electric vehicle cliché ticked off there. But don’t be so sure. In the metal the Ioniq 5 is really striking, much more all-road-style hatch than full blown SUV despite all the talk and the fitment of Michelin Pilot Sport 4 SUV tyres. The silhouette and details are intended to evoke the Hyundai Pony, which again won’t fill anyone with hope, yet the Ioniq 5 manages to look both contemporary and classic at the same time – the slender light bars at each end especially attractive.

Note, moreover, where those 20-inch wheels sit, right out at the Ioniq’s corners. It means this 4.6-metre-long hatch has a three-metre wheelbase – a Porsche Panamera’s is 50mm less – which, combined with the space benefits of a bespoke BEV platform (Hyundai’s E-GMP, if you’re interested) means the 5 is cavernous inside. As in truly enormous. There’s luxury car levels of space and more, with no transmission tunnel to spoil things. It’s a virtue Hyundai is keen to make the most of, too, with front seats that recline and a second row that can make use of the Universal Island – a centre stack that can move 140mm – with charging outlets and more. Typically, if a manufacturer calls an interior a ‘Living Space’ – as Hyundai does – it’s because of a nice stereo or some better leather, but here it really does feel as far removed from a driving environment as it’s possible to be on four wheels. A theme kicked off by the BMW i3 in 2013 and its ‘loft’ look has finally been improved upon, by Hyundai. The driver is faced with a pair of 12-inch displays, one for vital info and the other dealing with infotainment; both are pretty hard to fault for clarity and simplicity, with physical buttons handy for switching between media and nav. It says much of screens in 2021 that the only real issue might be borders that looks a little blocky – filled out to the edges like an iPhone screen would seem much more modern.

So, the Ioniq 5 has a genuinely excellent interior (at least until tea is inevitably spilt on the upholstery). It’s all eminently logical for something so futuristic, too, with a chunky gear selector beneath the right-hand stalk, nice paddles for adjusting brake regen, a drive mode button on the wheel and even a simple traction control button. It sets the right tone before hitting the standby switch.

Well, mostly. Because while a lounge is great for passengers and snoozing owners, plump vegan seats (albeit trimmed for passenger room behind) and a Jong-e Graphic User Interface don’t exactly speak to a thrilling experience, even if the Ioniq 5 isn’t specifically designed with that task in mind. Pleasingly, it turns out there’s much more to this Hyundai than merely the funky look and superb interior – it’s nice to drive, too.

Our test car was a top-of-the-range 73kWh model with 305hp that will sell for almost £50k; it’s possible that the charm offensive may not have been as persuasive with 231hp or a mere 170hp that the sub-£40k models come with. Because that won’t move two tonnes very fast. But hot hatch power and a burly 446lb ft certainly can, the 5.2-second claim to 62mph feeling entirely believable and acceleration remaining strong after that point. The regenerative braking is nicely incorporated with regular braking, too, under Hyundai’s ‘i-pedal’ name, and adjustable through three levels up to that with paddles that shame those of a Golf GTI. Roundabouts using just paddles and not a pedal for braking are much more fun. A word of warning, however: Eco mode makes the throttle too sleepy, and Sport makes it too sharp, which can make steady progress tricky – the Ioniq is really best left in Normal the whole time.

The resulting car is a treat: fast, comfortable, refined and luxurious. It isn’t all at sea dynamically, either; the Ioniq 5 can float a tad over challenging surfaces, but having the majority of the weight on the floor means it never seems unmanageable. The steering is light, which always feels strange in a car so hefty, yet accurate; should you feel so inclined the all-wheel drive Hyundai can just be felt squiggling its chunky bum out of slower corners, even if it doesn’t feel entirely comfortable doing so. But rumours of an Ioniq 5 N are not as daft as they seem; there’s the acute sense of balance that so many EVs have, and the long wheelbase ensures stability without killing all semblance of agility.

So the Hyundai Ioniq 5 is really nice to look at, really nice to be in and really nice to drive as well, all in its own discrete fashion. In what can already seem like a crowded space it offers something different. And that’s before considering it as an EV, because there it is perhaps more competitive than anywhere else. The Ioniq is supported by an 800v charging capability as standard (like a Porsche Taycan), with 400v also possible with no adapter required. It can accept a 350kW charge where something like a VW ID.4 can only take 125kW, so in a best-case scenario 100 WLTP miles could be added in five minutes. You would expect a lotto win before those exact charging stars aligned, but it remains an advantage nevertheless. The Ioniq also has a Vehicle-to-Load function (V2L), with two ports available to use the car as a charger for electric stuff, even when it’s turned off. Hyundai reckons it’s just the thing to charge up “any electric device”, including electric bikes and even camping equipment.

Perhaps that’s the key to the Ioniq 5’s considerable appeal; where it can feel there’s no more to discover about so many electric vehicles after 15 minutes behind the wheel, the Hyundai is a car you want to carry on driving, enjoying and exploring for much longer. It manages to be both innovative yet entirely familiar, groundbreaking without seeming overtly odd – which is exactly the space an EV in 2021 should occupy. Without having tested range and charging claims the praise can’t be emphatic just yet, but this is an immensely impressive first showing from the Ioniq 5. UK customers will pay anything between £36,995 and £48,145 for one, depending on battery and before options. Don’t buy anything similar – hatchback, SUV, CUV, battery or petrol powered – without trying the Hyundai first. It’s very good indeed.