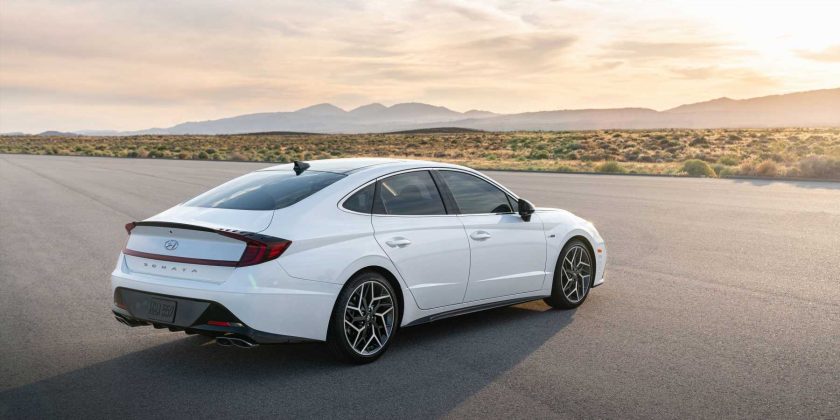 As American manufacturers have basically bowed out of sedan production, the non-luxury competitors from Korea and Japan have doubled their collective efforts. They haven’t doubled the amount of sedans available, but they are catering to the sedan enthusiast buyer. The Honda Accord has become sportier, with its top output measured at 252 hp and 273 lb-ft. The Toyota Camry TRD hit the scene last year with a V6 making 301 hp. And now Hyundai, adding to its performance-focused N-brand cars, has released the 290-hp Sonata N Line sedan, on sale this month for $33,200. First, let’s dig into that.

The new Sonata N Line sedan comes with a Smartstream 2.5-liter turbocharged four-cylinder, making 290 hp and a hefty 311 lb-ft of torque. The Smartstream name has only been around since 2018 but now has almost 20 variants across Hyundai, Genesis and Kia vehicles. Here it’s connected to an eight-speed dual-clutch transmission and only the front wheels. The basic Sonata gets the same four-cylinder, but without a turbo, and with a different head and internals.

The Sonata’s DCT is a wet-clutch type, using oil for the cooling required of the higher torque loads. It uses an electric oil pump to keep everything moving and lubricated, which also reduces parasitic drag. Electronic actuators operate the system providing more precise shifts and better efficiency. It also features a system called N Power Shift that “engages when the car accelerates with more than 90 percent throttle demand, mitigating torque reduction by using upshifts to deliver maximum power to the wheels through each gear change.” 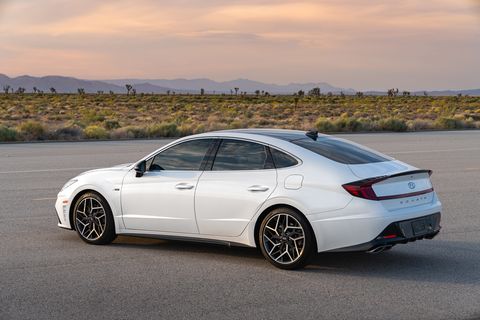 The Sonata N is based on the Sonata SEL and comes with those 19-inch wheels (summer tires are $200 extra), specific N front and rear fascias, a rear spoiler, panoramic sunroof, dual exhaust, LED taillights, and a ton of N badges. Inside, expect more N cues like a sport steering wheel, aluminum pedals and N sport front seats.

Now, the Hyundai Sonata gets killed in sales by the juggernauts in the class in the Accord and Camry. The Camry sold 240K examples in the first nine months of this year, the Accord about 145K. Compare that to the Sonata’s 53K.

On power to weight, the Camry weighs in at 3,571 pounds leading to a ratio of 11.8 pounds per horse. The Honda Accord tips the scales at 3,380 pounds, but with the lower output it lands at 13.4 pounds per horse. The new challenger Sonata N weighs 3,336 pounds and with 290 hp it comes out to 11.5 pph. Technically the Sonata N should feel the fastest. I haven’t driven the Sonata yet, but I will say the Camry TRD and Accord Sport are no-qualifiers fast, faster than turn of the century muscle cars. And we’d expect the same from the N, especially after driving the Veloster N hatchback, which is by far the best car the company produces.

All three use the common, MacPherson strut front, multilink rear suspension setups. And all would say these sportier versions get unique tuning on their respective systems.

Overall, we’re looking at three almost evenly matched, affordable sedans with an enthusiast bent. The Sonata looks the wildest, by far, especially with the new-look headlights. The Honda Accord would be the sleeper of the group with its sportback body and the Camry is a probably in the middle.

Even though the American contingent seems to be on life support—Sedans aren’t dead. In fact, if you’re looking for fun sedans without any qualifiers, there might be more affordable options now than ever. And if you need one family car, that can also be your fun, sporty car, it’s a buyer’s market.