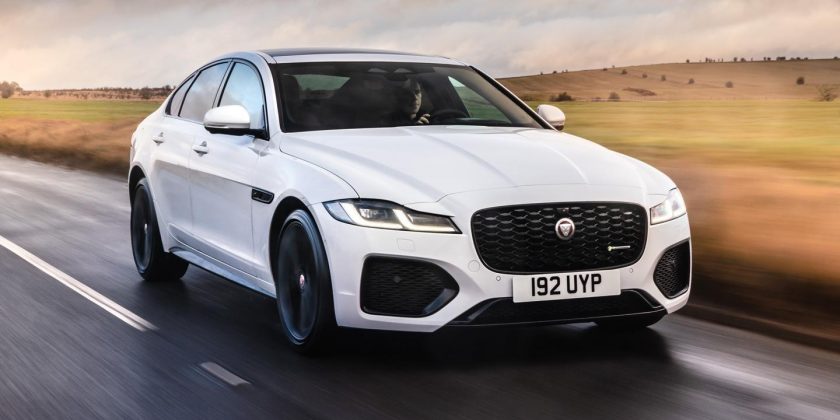 Starting a review with a spoiler is like opening an Agatha Christie novel at the last page. But it’s important to highlight from the outset (and before you jump to the comments) that the 2021 Jaguar XF is a marked improvement on the pre-update car in several key areas. The two left-hand-drive, Euro-spec cars we drove earlier this week proved that much. There are worthy technical upgrades under the bonnet, in the chassis, and, most significantly, in the cabin. And £2,410 has been slashed from the starting price. It feels significant. Still, there's a catch.

The XF now kicks off at £32,585 in MHEV diesel form – we consider it and the pricier P300 here – so the entry-level car is £7k cheaper than a 5 Series and A6, and nearly £7.5k less than an E-Class. But given that many buyers prefer to pay for their car on a monthly basis (where savings appear smaller), it’ll likely be the car’s other attributes that count most. We’re obviously not talking about the exterior design, which remains handsome in both saloon and Sportbrake format, because the changes there – like a bigger grille, J-shaped LEDs and new 20-inch wheels – are subtle to say the least. We’re talking about the tech.

The new interior architecture was previewed last year, but now, having sat amongst its new screens and pressed the buttons, we can confirm it addresses almost every one of the earlier layout’s shortcomings. Essentially nothing is carried over. With good reason: the new look is beautifully simplistic and fully wrapped to the floor in leather, with a new squidgy backing. Even the door trim has the same cushioning underneath, while the seats are softer but no less supportive on your torso and legs. The steering wheel gets a new two-part design, which feels as good in your hands as it looks.

Then there’s the centre console and its 11.4-inch touchscreen, complete with high-resolution Pivi Pro graphics and an aesthetically pleasing front-end. The swipe function and easily navigated menus are a joy to use, although (mercifully) the XF retains proper climate control knobs. There are haptic buttons for other things, like the heated front and rear screens, and the volume is controlled by a physical roller beside your knee. Rejoice. The drive mode adjuster is a rotary knob too, which raises from the centre console when you click it, while the new gear selector is compact and wrapped in more soft leather. It clicks back and forth in operation, or acts as a place to rest your palm when not needed. Taken altogether, it's an impressive combination (and compromise) of digital and traditional approaches.

The XF driver now looks ahead at an all-digital instrument cluster as standard, which allows for customisation of the display so you can, for example, have navigation there and leave the centre console screen to show album art. The new steering wheel controls, which are illuminated, allow you to cycle through the settings in a familiar manner. Although if we’re honest, the menus aren’t the quickest to navigate through due to the compact area you have to work with, between digital speedo and rev counter. That being said, most people will find their preferred layout and leave it that way forever. Failing that, the XF gets a head-up display, so you needn’t take your eyes off the road.

This is useful because the established chassis talent has migrated to the latest model. You sit low and the wheel pulls nice and close so your elbows can bend and two fingers can rest on the extended aluminium shift paddles. It's an easy place to get comfortable and that means that once moving, you quickly begin to feel at one with the car. This is particularly true of the mild hybrid diesel because the electric assistance provided by its belt integrated starter generator and 48v lithium-ion battery (mounted under the rear seats) makes for excellent throttle response. There’s a noticeable shove in the back provided by the instant supply of torque, which is then succeeded by the turbocharged 2.0-litre engine’s 317lb ft of twist from 1,750rpm. 204hp follows on at 4,250rpm, so progress is swift.

The diesel sounds refined, too, with a purposeful growl under heavy load and nothing in the way of synthesising. The new model’s active noise cancellation has a noticeable effect on road and wind noise, so you’re free to enjoy the powerful Meridian sound system now embedded into the new cabin architecture. Both saloon and estate ride nicely as well, with Jag’s new-for-21 bushes and retuned damping offering a softer edge, while ensuring both cars retain a sporting intent when you apply some lock. The Sportbrake and its standard-fit, air suspended rear is the more supple version by a tiny margin, although the saloon has the edge when it comes to handling, thanks to its use of adaptive dampers all round. Possibly the absence of a 48v battery helped, too. Rest assured both cars steer brilliantly, with good feel from the front axle and neutral balance. Body control is good, despite the fact these cars weigh beyond 1.8-tonne.

Handily, the mild hybrid diesel’s heftier punch easily masks that mass, and it even helps to compensate for the ZF eight-speed automatic’s slight hesitancy when you ask for a sudden delivery of power. In contrast, and despite its much higher output, the P300 R-Dynamic saloon we tested was actually less reactive in these moments, thanks to the absence of mild hybrid tech. It’s good for a claimed 6.1 seconds to 62mph, and once revved hard, does push you into those soft seats. But in more than one real-world scenario (like overtaking and pulling out of junctions), the 204hp MHEV diesel showed the P300 up. Once moving, the latter is obviously the much quicker car and it can certainly entertain a committed driver – not least because the all-wheel drive chassis is well matched with British roads – but it needs to be worked. That’s illustrated in the combined economy, which is quoted at 32.8mpg.

So there’s the catch. The MHEV diesel is really very good, with great throttle response and a plus-50mpg economy. But even Jag’s most optimistic calculations suggest it will make up just 30 per cent of overall demand – because it’s a diesel. The £39,255 P300 is arguably more appropriate for mainstream buyers (alongside the updated P250 which we’ve not yet tested), but it’s powertrain – as effective as it is – doesn’t quite excite as we’d hoped it might, and it’s much thirstier. That’s not to undermine the overall quality of the new XF, because its strengths plainly overwrite previous weaknesses to an impressive degree. It's just a shame that the best version (so far) is the one that most buyers will now reject out of hand. That's unfortunate, and not really Jaguar's fault. Everywhere else, this is the best generation of XF yet.