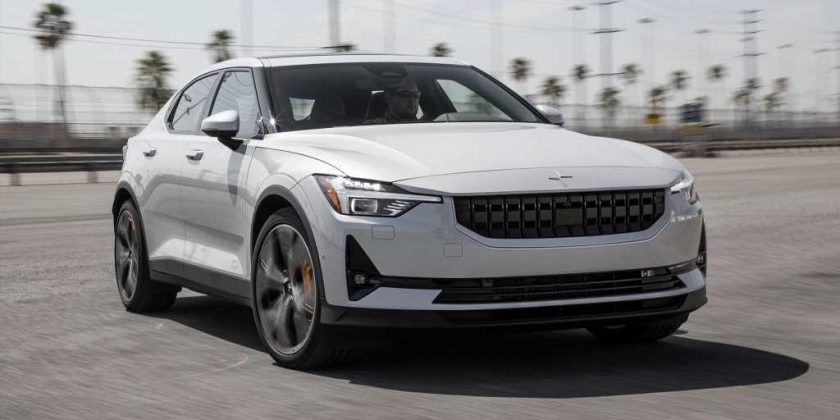 It’s not easy launching a new brand, but by all accounts Polestar is off to a good start. The new electric vehicle brand jointly owned by Geely and Volvo launched its first vehicle, the plug-in hybrid Polestar 1, late last year. Although it’s a fantastic vehicle—both as an engineering exercise and as a grand tourer—the Polestar 1 is expensive and limited to just 1,500 examples over a three-year run.

Enter the Tesla-fighting 2021 Polestar 2, the brand’s first truly relevant vehicle—the introduction most folks will get to the new Sino-Swedish company.

View Other 2021 Car Of The Year Contenders And Finalists Here

You’d be forgiven for thinking the 2, Polestar’s first full-electric vehicle, looks more like a Volvo than a car with a unique Polestar identity. Like the Polestar 1, the Polestar 2’s styling is cribbed from an older Volvo concept—in this case the Volvo Concept 40.2, which made its debut back in 2016 alongside what would become the Volvo XC40.

The resulting Polestar looks a lot like an electrified S40 Cross Country, were Volvo to build one. The cramped, pillbox-like interior is also a familiar mishmash of Volvo styling cues, except with a new easy-to-use Android-based infotainment suite. For true Earth Firsters, there’s a plethora of recycled and vegan materials.

The 2’s styling split our staff’s sensibilities, but all agreed that they’d prefer Polestar develop its own styling cues instead of copying from Volvo’s homework. It seems like we’ll have to wait for either the Polestar 3 SUV or the Polestar 4 sports car for that.

More Volvo hardware sits underneath the Polestar 2’s skin. Riding on the company’s modular CMA platform, which underpins the gas and related electric versions of the XC40, the Polestar 2 sports a fairly unique battery arrangement. Its battery pack is laid out underneath both the front and rear seats and also stacked into the center console and through what would be a transmission tunnel on a gas or diesel-powered car.

As of now, all Polestar 2s are equipped with front and rear electric motors with a total system output of 402 hp and 487 lb-ft of torque. Due to the permanent-magnet nature of the motors—meaning they must always be driven and can’t freewheel—the Polestar 2’s range pales in comparison to the rival Tesla Model 3, which nets 141 mpg-e combined and 250 miles of range on the EPA cycle to the Polestar’s 92 mpg-e and 233 miles of range. And for 2021, Tesla is promising 263 miles of range on a base Model 3.

Although most EVs have trouble competing with Tesla on range, most can at least hang with it when it comes to the drive experience. Despite Polestar’s origins as a Volvo racing team, the 2 disappointingly can’t. It’s not that the Polestar 2 isn’t quick—blistering straight-line performance is a cheap trick when it comes to EVs—it’s that when you ask the 2 to do more than zip quickly away from the line, it starts to falter.

The Polestar’s ride is the biggest offender. Sitting on Öhlins dampers (manually adjustable, though you need to reach under the car to adjust the fronts and somehow slide your hand behind a splash shield to change the rears), the 2 has trouble managing the weight of its heavy steel construction (not to mention battery pack) as it crashes and heaves over bumps. “It feels like the Polestar is riding on pogo sticks,” associate road test editor Erick Ayapana said.

A stiff ride would be forgiven if there were some kind of handling trade-off, but there isn’t one there, either. The overarching Polestar 2 drive experience is more that of a stiffly sprung SUV than a luxury sport compact. Testing director Kim Reynolds noted that the 2 “understeers more than I’d like; you have to be careful to be very polite with the right foot, or it will abruptly understeer wide.”

The exceptional Polestar 1 had our hopes set high for the 2, but unfortunately it doesn’t measure up just yet.

The pack is rated 78 kW-hr, but only 75 are usable (it’s the same one as in the electric XC40, and they call that one a 75-kW-hr battery. It’s like saying the gas tank has 11.5 gallons, but that last half-gallon is out of reach of the fuel-pump intake.