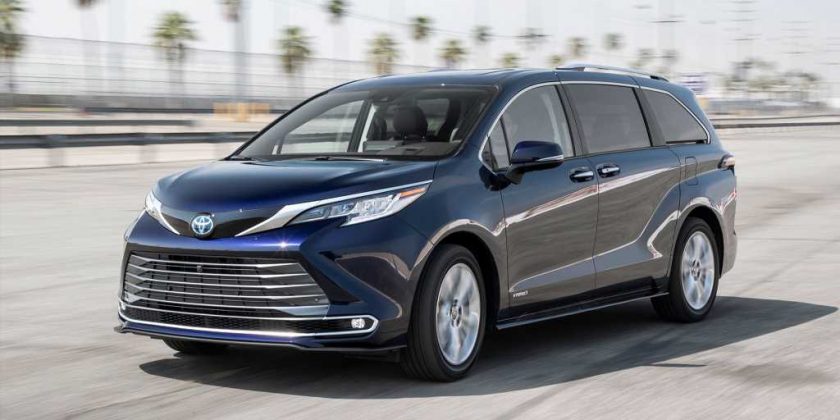 The wait is finally over. More than a decade after Toyota’s third-generation Sienna minivan made its debut, the brand’s fourth-generation Sienna arrives for 2021 with a modern cabin, a strictly gasoline-electric hybrid powertrain menu, and more comfort and convenience items. Based on Toyota’s TNGA-K platform, which is shared with the Camry, Avalon, RAV4, Highlander, and Venza, the latest Sienna aims to please families during long road trips with its cool features, spacious center console, and lower floor, the latter of which makes it easier for kids and grandparents to climb in.

View Other 2021 Car Of The Year Contenders And Finalists Here

But first, you have to get past the 2021 Toyota Sienna’s new exterior styling. Purportedly inspired by Japan’s Shinkansen bullet train, the Sienna is both flashy and wacky. Its huge grille and sculpted lines on the front continue to the profile, where the muscular wheel flares give the Sienna an SUV-like appearance. If you see some Supra in its rear, then you’re not alone—Toyota designers and engineers wanted to give the Sienna a sporty look.

“Weirder than anything, but anything but an oblong blob, eh,” testing director Kim Reynolds said. Buyer’s Guide director Zach Gale went the opposite way: “I actually like the Sienna’s styling. No, not that grille. I mean the rest of it.”

The cabin is more compelling. Judges appreciated its new look—especially the ample center console and the long, spacious tray that runs alongside the dash. The tray is perfect for holding keys, wallets, or phones, and it’s within easy reach for the driver or front passenger. The innovative “bridge” center console allows occupants to place large items, such as a purse or liter water bottle, under it without compromising access from either side. “Parents [in] front will love the big storage shelf built into the dash, the multitude of cupholders, and the big bridged storage area,” features editor Christian Seabaugh said.

With the Super Long Slide seats (standard in the new Platinum and Limited grade), the second-row captain’s chairs slide back up to 25 inches, and with the built-in ottoman, children and parents will feel like they are in an executive jet.

Unfortunately, access to the third row is not as convenient between the captain’s chairs due to the long center console. Once you make it all the way back, the small side windows contribute to a claustrophobic experience. Unlike the Chrysler Pacifica, which offers a power-retractable third row, you’ll have to put your muscles to work to make the Sienna’s rearmost seats disappear.

In a big change from the previous generation, the Toyota Sienna ditches a V-6 engine for a hybrid powertrain composed of a 2.5-liter four-cylinder and two electric motors. The new Sienna’s powertrain produces 245 hp, 51 horses less than the outgoing model.

“The more I drive the Sienna, the more it feels like a big Prius to me,”  senior features editor Jonny Lieberman said. “And I mean that in a bad way. The Prius, while extremely efficient, sacrificed everything else on the altar of efficiency.”

Beating Toyota’s own estimates, the Sienna delivers 36 mpg combined—that’s 15 mpg better than the 2020 Sienna and 6 mpg more than the Pacifica Hybrid in its gas-only mode. Another advantage for the Toyota is its available all-wheel-drive system, a feature Chrysler only offers all-wheel-drive on the gas-powered Pacifica, not the gasoline-electric Pacifica Hybrid.

The 2021 Toyota Sienna is a big improvement over the previous minivan. Then again, Toyota engineers had lots of time to improve on its swagger wagon. Families will welcome the updated tech and will enjoy the fancy new features. But a better ride and powertrain refinements should be included in this minivan’s midcycle refresh.