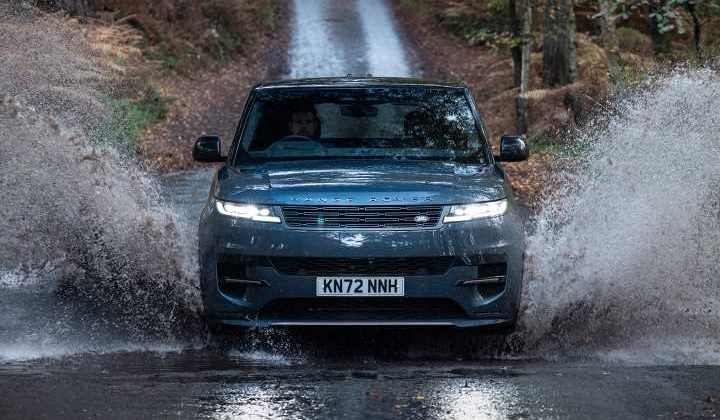 There’s nothing quite like testing a car in the environment best suited to it. Sports car stars shine brightest on a B road, and it seems a disservice not to drive stripped-out track cars on a proper circuit, just to see what the premium really buys. In its time with PH, the new Range Rover Sport undertook what’s hopefully a very relevant test: crammed full of puppy paraphernalia, baby junk and booze, tasked with a 250-mile round trip in crummy weather to visit friends. The kind of friends who aren’t that into cars but, of course, know they quite like Range Rovers.

It certainly makes an impact, the L461, by dint of its sheer size. Even when every other new car is an SUV of some description, this thing is genuinely vast. It towers over Qashqais and the like, makes its standard-fit 22-inch wheels look much smaller than they are, and shrinks every single parking space you leave it in. Par for the course in this sector, perhaps, though it seems something to be aware of. With the mirrors out – always handy for driving on a road – the Sport is 2,209mm wide, and it never feels anything less than that, which can make anything smaller than an A-road feel a bit undersized. Not ideal in Britain.

Moreover, at more than 1.8m tall and just about 5m long, you hardly blend in – even in a muted colour. Credit where it’s due though, the Sport is a handsome old beast, recognisable RR cues and modern touches spliced together nicely. If not totally different from before, this new Sport does serve to make the old one look, well, a bit old. And, as ever, that’s as good a way as any to lure customers back to the showroom.

Anyway, the drive. Range Rovers of any stripe have always handled longer journeys with aplomb, and this Sport introduces another level of opulence. If there’s a more soothing and satisfying ICE-powered car out there at the moment, we’ve not driven it. Perhaps a Cullinan will be even more imperious, but it can’t be much better than this. While the Active Noise Cancellation is probably doing its bit for refinement (with microphones in the wheelarches and speakers in the headrest to neutralise unwanted sound), the whole car gives the impression of a 2,400kg detox clinic. Which is a tad ironic, of course, but the way it subdues all external distractions, cossets everyone onboard and ensures the driver wants for nothing is very calming indeed. This might explain why families have always flocked to Sports. Everybody is comfortable, everybody feels safe, and everybody has a good view out and a charge point – perfect.

As in the old car, the mild-hybrid straight six diesel with 350hp and 516lb ft is a near-perfect fit. The eight-speed auto marshals progress decisively and intelligently, meaning there’s never any need to use the (lovely) gearshift paddles, the engine is imperceptible at low revs and super smooth even when it can be heard, and the best part of 40mpg is easily achievable. As is a 500-mile range. As John mentioned with the full-size Range Rover, it’s a shame to think that diesel has such a bleak future when it’s this impressive.

If there is a problem, it’s a familiar one. There’s maybe the odd occasion when you’d want a bit more oomph for £100,000. Which sounds mad for a car with 516lb ft, and most will be more than happy with the way this dispatches slip roads and overtakes – but with stuff onboard the performance maybe isn’t as totally commanding as the rest of the car feels. You wouldn’t want less than this, surely, for an appropriately emphatic Range Rover Sport experience. Maybe it’s not a fair comparison, but the old V8 mild hybrid diesel used in the Audi SQ7, Bentley Bentayga and similar, had another 150lb ft. And that’s quite a lot.

We’re talking fine margins, though, because the rest of the package really is very good indeed. The additional chassis technology for this new generation, including rear-wheel steer and active anti-roll, has been very smartly integrated; if not an unflappable corner carver like a Cayenne, it’s a more capable Sport than ever, both keener to turn and yet more luxurious as well. Those craving the last bit of driver involvement and reward from an SUV will remain better served elsewhere, though the compromise seems hard to take issue with when it results in such a broad scope of ability.

Important caveat, however: this car was equipped with the Stormer Handling Pack, which brings the Dynamic Air Suspension Electronic Active Differential, Torque Vectoring by Braking and all-wheel steering, which costs £5k and has been fitted to most test cars so far. Works nicely, too, allowing you to power decisively out of bends sooner than expected. It’s not clear yet how a Sport would fare without it, even with 285-section tyres at each corner, and how much of the car’s accuracy and consistency is wrapped up in the extra kit. Certainly it doesn’t take long to be confident in a car this large, potentially to the consternation of other road users.

Unsurprisingly, the feeling of unflappable authority extends off-road, too, even if a sandy byway tested the Sport like a lido would Ross Edgeley. Terrain Response can stay in Auto, or one of the environment presets can be chosen, or four individual modes can be configured – it’s that comprehensive. Such is the disdain with which the car seemingly casts aside any challenge, on road or off it, isolating its occupants from whatever effort it’s expending, you’d need to actively dislike SUVs not to be persuaded by it. It seems capable of anything and everything regardless of environment, meaning there’s a temptation to place it in a class of one. Shame it can’t have seven seats, really.

And for all the objective improvement that’s without question been made, the Sport still exudes that traditional Range Rover charm. It’s a hard thing to quantify, which isn’t much use for a review, but there’s no denying that perched atop the thing, with such a stylish, intuitive dash all around, and being able to call on ample performance that won’t be thwarted by any situation or surface is an immensely satisfying way to travel.

The Sport’s new-found opulence and capability bring to mind a Bentley Bentayga, where no obstacle – be that a 700-mile trip or an off-road adventure – feels like it’d be remotely taxing. That’s quite a feat. The temptation would be to call it a cut-price Bentley, only there’s not an awful lot to save – the car seen here comes in at £106,120, and that’s with just £6,500 in options. And if you’re primed to spend six figures on a diesel, the allure of a regular Range Rover surely becomes hard to ignore.

Consequently, sheer cost remains the Sport’s biggest demerit, especially given an identical engine cost £85k in the old HST. Even allowing for its considerable and wide-ranging improvements, it’s still resolutely a car for the privileged few. A BMW X5 isn’t of the same calibre, yet it’s hard to ignore the fact that a 40d M Sport is a smidge faster, more efficient and costs from £70,000, making the Range 50 per cent more as tested. And half as much again is a lot. Still, Land Rover can justifiably point to more than a million customers willing to pay the premium since 2005. Don’t be surprised if that willingness escalates regardless of cost – the Range Rover Sport is more capable and desirable than ever.