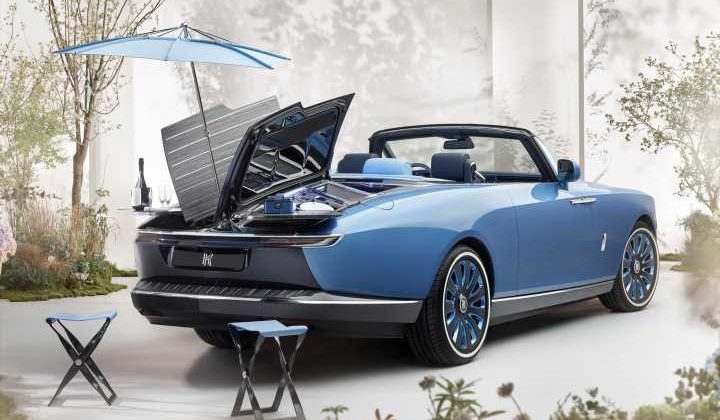 Custom body builds are now a permanent feature of the RR portfolio. And they aren't going to be cheap…

Rolls-Royce has used the reveal of a new custom model to announce the permanent inclusion of a ‘Coachbuild’ service in its portfolio. Produced in three examples for a trio of clients, the new Boat Tail rebirths a name not used since the twenties and applies a custom, boat-inspired rear-end to an otherwise familiar Rolls-Royce form. It’s the first car to come out of Rolls’ formalised Coachbuild service, and kicks things off appropriately, with each example apparently priced from £20 million. Twice that of a Sweptail.

Clearly, this new service is to be one aimed at the closest and wealthiest Rolls-Royce customers, who are prepared to pay a big sum not only for ultra-exclusivity, but also a close involvement in the development of their dream car. In this case, the three clients fancied something a little unusual, creating a convertible car with a back-end that mimics a yacht’s tail, providing space for essentials like champagne and their finest crockery. The reported total bill, by the way, makes the Boat Tail the world’s most expensive car.

Each of these 5.8-metre-long builds (60cm longer than a Sweptail) takes the boat influences much further than just the shape of that rear-end. Rolls-Royce has used wood with a linear grain and brushed stainless steel pinstripe inlays to mimic the decking of a yacht, while the canopy roof is shaped with flying buttresses. Throw in the finest of leathers, hand painted details and, of course, matching Bovet 1822 timepieces, as well as a selection of bespoke extras that make a Ferrari options list look dirt cheap, and you have yourself one very special – and potentially quite divisive – Roller.

Whether this Boat Tail is to your taste or not won’t be of concern to the team in Goodwood, because the official launch of the Coachbuild service means anyone with pockets deep enough can turn their own idea into reality. This isn’t a new direction for RR, either; in the early Charles Rolls and Henry Royce days, the company’s customers were expected to commission bespoke bodies, so it’s a return to roots more than anything. Indeed, CEO Torsten Müller-Ötvös, said coachbuilding was “an integral part of the Rolls-Royce story”.

“Coachbuild provides freedom to move beyond the usual constraints,” he said. “Normally, there is a natural ceiling to Rolls-Royce Bespoke by way of the canvas. At Rolls-Royce Coachbuild we break through that ceiling, embracing the freedom of expression afforded by coachbuilding to shape a concept directly with our commissioning patrons.”

Now that Coachbuild has kicked-off with a car inspired by a boat, what would your custom-built Roller be inspired by?