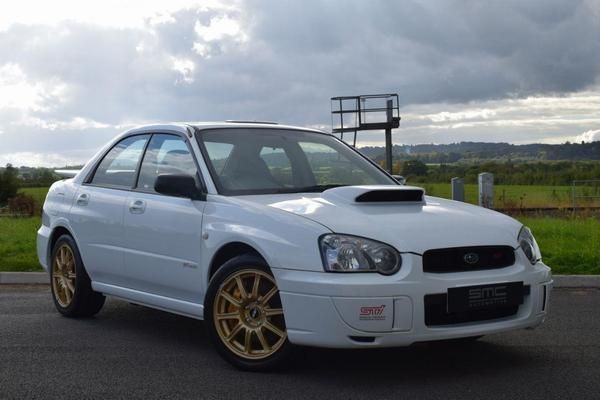 Lightweight homologation version ranks as one of Subaru's all-time greats. But is it worth £100k?

It's a fitting coincidence that a delivery miles Subaru Impreza Spec C pops up in the PH classifieds just a week before the first deliveries of Toyota's homologated Yaris GR begin. The Spec C variant of Subaru's Mk2 Impreza was noughties-based evidence that a WRC-spec car from a Japanese maker can excel on UK roads – even when it was a JDM exclusive.

Examples found their way to Britain, of course; inevitable when you consider how obsessed the nation was with its nineties predecessor. The Spec C turned things up to eleven not for any marketing advantage (or not primarily, at any rate) but rather to give it the edge in Group N competition. It shed weight with lightweight versions of the intercooler, subframe and glass, as well as aluminium body panels and a small battery.

The chassis and driveline were reworked as well, with new dampers and a rear strut brace to firm things up, while a different central differential setup and wider track front and back ensured power was sent to the road more effectively. The 2.0-litre boxer was force fed by a turbo featuring a dual-ball bearing, and it blew through an exhaust manifold with pipes of equal lengths, freeing up performance – although officially it retained a peak of 280hp at 6,000rpm. The quoted stats didn't change but those savings, along with the deleting of all unnecessary items from the cabin, ensured noticeable gains in performance.

In fact, the Spec C was hailed as a very different beast – more composed and reactive without being brittle or overly sensitive on challenging roads. It suggested that engineering a car for the rough stuff of a rally stage would lend it the kind of composure on a B-road that few circuit-tuned models ever achieve. The Spec C was a reminder that the wonder of homologation worked both ways.

It's fair to say the car for sale here hasn't had much of a chance to demonstrate its talent; it has completed just 372 miles since it was built. It's about as factory fresh as things get, with the seller stating that most of the original protective plastics and wax is still present, and the interior still smells new. As you might imagine, it's been in dry storage and on show in museums since Subaru Tecnica International finished the car.

It's priced like a museum piece, too. You'll need £100k spare even consider taking a time capsule back to 2004 when Petter Solberg was vying for the WRC title. Hard to justify when very fine examples of the no-less-exquisitely-lovely P1 are available for less than a third of the cost. But the Spec C occupies a special place in Subaru's motorsport heritage – and unlike Toyota, they show precious few signs of returning to it. Let's just hope the next custodian isn't too concerned about adding a well-deserved few miles to the clock…