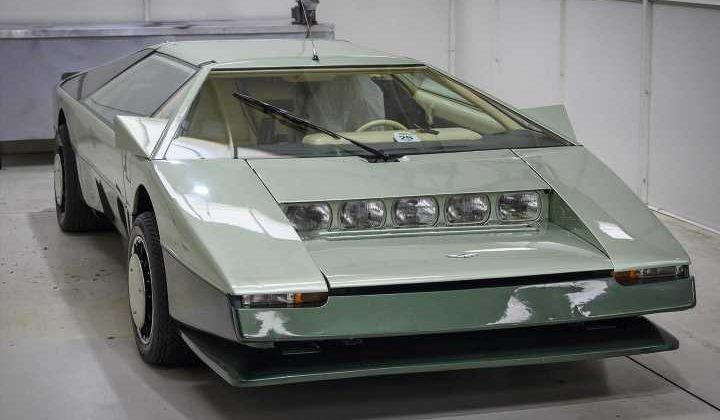 Aston Martin factory racing driver Darren Turner will attempt to reach 200mph in the 1981 Bulldog, forty years after it missed out on the mark by just 9mph. The streamlined supercar, built to highlight Aston Martin's technical prowess, was theoretically capable of 237mph (!) back in the day, but the project was canned before the goal was reached due to cost-saving measures. Now, however, the car's present owner wants to put things right, and prove once and for all that the Bulldog is indeed capable of 200mph.

Of course, Turner won't be driving the Bulldog after it's just been wheeled out of storage and dusted off for the occasion. Classic Motor Cars in Bridgnorth has almost completed an 18-month nut and bolt restoration of it, so the old fighter will be tip-top. That should mean some prodigious power from the twin-turbocharged 5.3-litre V8, most importantly, with estimates putting it at more than 600hp and in excess of 500lb ft. Numbers that ought to be enough for 200mph, especially with a fairly low drag co-efficient of 0.34.

Those with long enough memories will know that the original 191mph run took place at the MIRA proving ground, when Victor Gauntlett was chairman of Aston Martin Lagonda. Poetically, his son, Richard Gauntlett, has overseen the restoration to ensure the Bulldog is as his father envisaged, back when the objective of building the fastest car in the world still seemed possible. Gauntlett Junior said that "the car is well on the way to being restored and CMC will have it running by the end of the year," before the team and Turner "will then attempt the record that never was".

Turner has, as you'll know, done his fair share of awesome things during a 15-year career with Aston Martin, like winning his class at Le Mans three times in both the DBR9 and Vantage GTE. The 46-year-old Brit said of this new opportunity: "I had heard of the legend of Bulldog from within Aston Martin and when news started to filter out about the car being restored to go for the 200mph target, I thought that was such a cool thing to do. I really appreciate being asked and I'm looking forward to becoming part of the story of bringing Bulldog back to life and finally achieving what it set out to achieve all those years ago." Best of British to all involved – we can't wait to hear more.