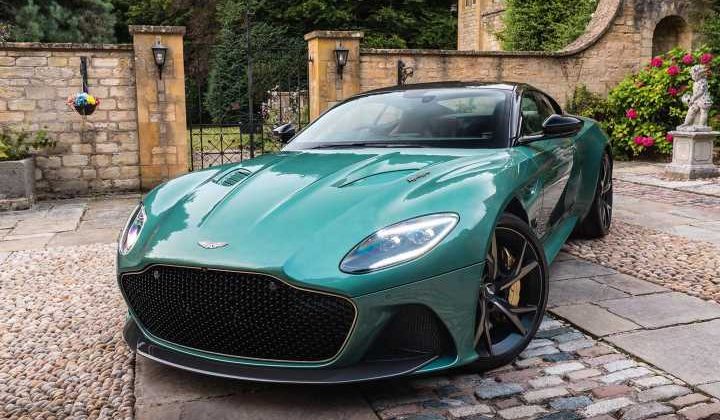 One of just 24 specials to celebrate the DBR1's Le Mans win is up for sale, with £85k off list…

Though there's a great deal of excitement around the return of Aston Martin to a Formula 1 grid, it would be fair to say that the vast majority of its motorsport success has come in sports car racing. Think of the victories for the Vantage GT3, GTE and GT4 cars in recent years, cars that likely won as many hearts and minds in audiences as they did outright races – not least for its achievements in the 24 Hours of Le Mans, where Aston took that dramatic last lap class victory with the Vantage in 2018, which set things up nicely for 2019 and its outright win with the DBR1.

This stunning DBS was Aston's anniversary gift to itself. Commissioned by Aston Martin Cambridge, the DBS 59 (get it?) was limited to just 24 examples, each bearing a long list of features that built on the already beguiling Superleggera – not least a 725hp twin-turbo V12. All of the 24 cars were painted Aston Martin Racing Green, wore a carbon fibre roof and spoiler, and received licks of bronze paint on their wheels. The calipers were given a matching shade, along with the grille surround and badges for good measure.

The work inside was arguably even more special. Each 59's cabin received a mix of Obsidian Black and Chestnut Tan leather, with fabric said to be inspired by the DBR1's interior on the seat backs and door inserts. Then things got really vintage, with Saddle Leather pods in the rear to hold replica helmets that mimicked those that would have been worn in the 50s, while period blue race suits and string-backed gloves also came as part of the deal. The suits could be carried in a fitted two-piece luggage set, matched to the finish of the car – perfect.

All of the DBS 59s were offered at £325,000, £100k more than the 'regular' Superleggera. Not cheap, then, but this was shortly after Aston had sold its seven-figure continuation pairs, including the DBZ Collection, so was nowhere near the brand's ceiling. Each car was handed to its owner at the Circuit de la Sarthe on the weekend of Le Mans 2019. With the provenance, the fabulous spec and considerable rarity, you might have expected each car to appreciate in value, but interestingly, this one listed in the classifieds is up for £240k. That's £85,000 less than its original RRP, yet it has done only 725 miles since new. It's the very first one built, too. What better way to celebrate Aston's return to the Circus…