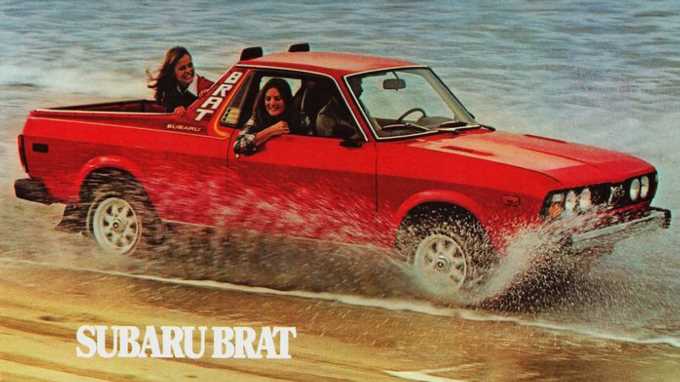 Once upon a time there was a brat—and no, it wasn’t a tantrum-throwing two-year-old inside the grocery store, but rather a little trucklet parked out front. It was the Subaru BRAT, which stood for Bi-Drive Recreational All-terrain Transporter. Bi-drive meant that there was a part-time all-wheel-drive system, actuated with a switch. Now, was the BRAT acronym actually dictated by that super technical, unexciting name, or did a team of rebellious marketing folks come up with a half-hearted retcon? That’s an investigation for another time.

A lot of people wouldn’t know a BRAT from a bratwurst, and even fewer would be able to recall the last time they spotted one on the road. Indeed, it’s an obscure automotive specimen that hasn’t been imported to the United States in nearly 35 years—but with the 2022 Ford Maverick on the horizon, maybe it’s an apt time to recall the capable little BRAT.

The two-door Subaru BRAT, Japan’s ute-like version of a compact truck, was created in response to the growing demand for smaller, compact trucks in the U.S. It wasn’t built on a new platform. Instead, it shared its underpinnings and AWD system with the Subaru Leone station wagon. By grafting on a bed, Subaru had a vehicle to throw into the burgeoning ring of compact pickups, including car-based models like the contemporaneous Volkswagen Pickup built in Pennsylvania, and larger body-on-frame models from the Japanese brands. The BRAT had a shorter wheelbase than the mini trucks and was about as long as the single cabs.

The Subaru BRAT lived a short life in the United States, spanning the years of 1978-1987. Overseas markets in Europe, Latin America, New Zealand, and Australia imported it until 1994. Outside of the U.S., it was known as the 284, Brumby, Shifter, MV, and Targa. Ironically, it was never sold in its home market of Japan since there was no real demand.

It was launched in 1978 with one engine option, a 1.6-liter H-4. The EA-71 boxer-four pushed out 67 hp and 81 lb-ft of torque and was mated to a standard 4-speed manual transmission. A few years later, the BRAT received a facelift and displacement increased to 1.8 liters, good for 73 hp and 94 lb-ft of torque. A dual-range transfer case was added. A turbocharged variant was added for 1983 and 1984 models, boosting output to 95 hp and 123 lb-ft of torque.

Was the Subaru BRAT truly a truck? Or a coupe-utility? Were the beefier Chevrolet El Camino or Ford Ranchero trucks? The debate rages on as to what constitutes a truck. The government, however, considered the Subaru BRAT a truck, which meant it was subject to the hefty 25 percent “chicken tax” import tariff imposed on light-duty trucks.

Subaru had a solution for this costly hurdle in the form of rear-facing jump seats in the bed of BRAT, allowing the BRAT to qualify as a passenger car with merely a 2.5 percent tariff. What a fun era, right! These loophole seats were discontinued for the last couple of years; finding a BRAT with the jump seats still intact is special.

In addition to the jump seats, the Subaru BRAT had some other goodies: a spring-loaded hidden door that included a side step for the carpeted cargo bed, an available T-top split roof, and a spare tire in the engine bay. That’s right, the spare tire was nestled neatly under the hood between the engine and the firewall. Some BRATs were equipped with a matching camper shell. This custom Subaru Brat camper conversion drew a crowd at the 2020 Chicago Auto Show.

The Subaru BRAT was a funky four-wheel-drive and found favor with a cult-like group of BRAT fans. One of those fans was President Ronald Reagan, who apparently owned a BRAT up until 1998 before donating it to charity. The restored BRAT can still be seen at Reagan’s ranch.

The BRAT was no stranger to TV shows and movies. A 1985 BRAT appeared in the television show “My Name is Earl,” and a 1982 BRAT was in the movie Napoleon Dynamite. Eivin Kilcher of Discovery’s “Alaska: The Last Frontier” rebuilt a BRAT for his brother and considered the souped-up BRAT his dream car.

There are dedicated websites to all-things BRAT, and it seems that BRATs in various stages of decay can be found across the country. Drivable BRATs in poor condition can be found for a couple of grand, while nicer ones have auctioned anywhere from $6,200 to over $20,000. A 2,500-mile 1978 BRAT reportedly owned by a former Subaru executive sold for $46,198. According to Hagerty, about 100,000 BRATs were sold in North America.

What replaced the Subaru BRAT? The all-wheel-drive four-door Subaru Baja arrived some 15 years after the last BRAT was imported to the U.S. The Baja was made in Lafayette, Indiana, and was sold for a short time as model years 2003-2006. But it could never match the funky radness of the jump-seat-equipped original. Maybe one day we’ll see an EV BRAT restomod next to an Alpha Wolf at a stoplight.