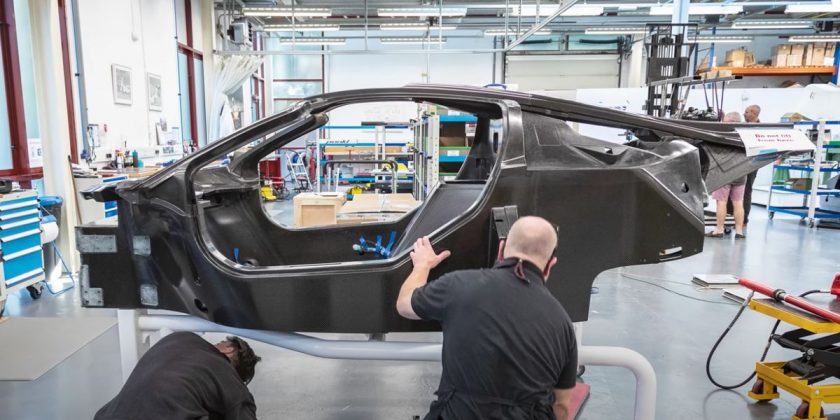 A few weeks ago we were admiring the guts of the Gordon Murray Automotive T.50 transplanted into the tubular space frame of an Ultima. At the time, the McLaren F1 successor’s carbon fibre monocoque wasn’t ready yet, and the engineering team wanted to get a head start on the powertrain side of the equation.

The first carbon tub has since arrived at GMA’s prototype workshop, however, as seen in the video above. It’s a thing of beauty, tipping the scales at around 100kg – roughly comparable to McLaren Automotive’s MonoCage.

A few hours after releasing this video, Gordon Murray Automotive announced the creation of a new 54-acre “global HQ and technology campus” in Windlesham, Surrey. Built on the site formerly occupied by the now-defunct Bristol Cars, it’ll be finished in 2024 via a £50 million investment.

Phase one involves a structure which will be home to vehicle manufacturing, sales, and heritage cars. Eventually, design, engineering, R&D and marketing facilities will all be on-site, creating over 100 jobs, GMA says.

The company’s existing facility at Dunsfold Park will be kept as the manufacturing base for the T.50 and the track-only T.50s. GMA’s original home at Shalford will be vacated once the new Windlesham HQ is finished.
Murray, who’s lived and worked in Surrey for 50 years, had this to say about the new development:

“Over 90 per cent of the content of the new T.50 comes from UK suppliers, which is something that we specified from the start. It is designed, engineered and manufactured from world-class British components in Britain.”