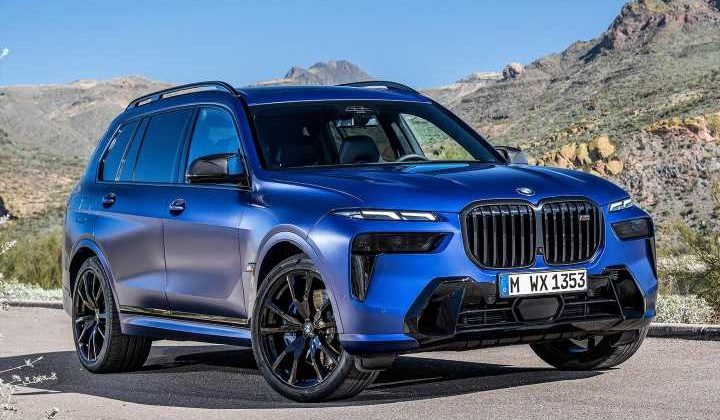 23-inch wheels for the first time, more interior tech and a fresh look – you thought the X7 mellow out?

It can be difficult to remember now, what with the Vision XM, the furore around the M3 grille and the iX, but the X7 was about as controversial as BMWs got at launch. They’re goalposts that more quite frequently. Having been announced at the end of 2018 and described by BMW as its “most successful model in the luxury class”, the X7 has now undergone a mid-life facelift.

There’s still no missing it, that’s for certain. Grilles are there loud and proud (with the option to have them illuminated), now boasting horizontally split LED headlights either side. Whether the fresh face is an improvement or not it’s hard to be sure of yet – BMW says the changes “emphasises the car’s upright stance and reinforce its road presence” – though at least there’s no danger of mistaking this car for the old one. Additional changes up front include what appear to be new vertical intakes and a busier bumper than before. Still, what did you expect from a 2022 BMW? The rear has been reworked, too, with highlights – or noticeable changes, at least – including new 3D lights and a bit more chrome.

The X7’s fabulous interior has always proved much less contentious than the outside, and that doesn’t look likely to change with the latest raft of updates. BMW iDrive now operates through a Curved Display, with 12.3 inches of screen for the driver and 14.9 for the other bits and bobs, working through BMW Operating System 8 from the iX. And, praise be, a rotary controller is still there as well. Extra tweaks include an X7 or M graphic for the passenger to gawp at, more standard kit – such as a panoramic roof, Comfort Access and heated seats – slimmer air vents and a redesigned centre console. New options are there as well, like heated seats for every row, a B&W ‘Diamond’ sound system and a pano roof illuminated by LED. In markets other than Europe, vegan upholstery will be standard. Make your own jokes now about the 500hp, 2.5-tonne, V8 SUV and its sustainable seats.

Speaking of engines, best look under that gigantic bonnet. Three engine options have been detailed for the revised X7, kicking off with a 352hp 40d 3.0-litre diesel and scaling up to a 530hp M60i, with a 40i petrol – boasting 380hp and 383lb ft – sat in the middle. So yes, no more quad-turbo M50d diesel, but more power and torque for the six-cylinder petrol that will likely be most popular. All engines use 48V mild hybrid technology, with up to 531lb ft and 37mpg possible in the diesel as a result.

BMW says every chassis system has been retuned for this latest X7 to “span the widest possible spectrum between sporty handling and driving comfort”, though quite what havoc the newly available 23-inch wheels might wreak on that isn’t clear. The six-cylinder cars will be fitted with puny 20s as standard, with the V8 – which did used to be the M50i, you’ve not remembered wrong – rolling on 21s from the factory. But the option for 23s is now there for those buyers that want it – and you can bet that plenty do. Even better, a new Parking Assistant Professional option can take over parking responsibilities two hundred metres (!) from the available spot. So any kerbing couldn’t possibly be your fault.

The new X7 will continue to be produced at Spartanburg in North Carolina, BMW’s “competence centre for X models”. And if you’re thinking this looks quite a big overhaul for a small seller, don’t forget how big a deal the X7 is in other markets; BMW describes it as “a central pillar in the ongoing product offensive the most exclusive reaches of the premium carmaker’s model line-up.” A launch will come around in August; those who aren’t willing to wait (or aren’t so keen on the new look) might like to know that original X7s are available from £70k, and the V8 from just over £90,000. Or you could go the whole hog and get an Alpina XB7…