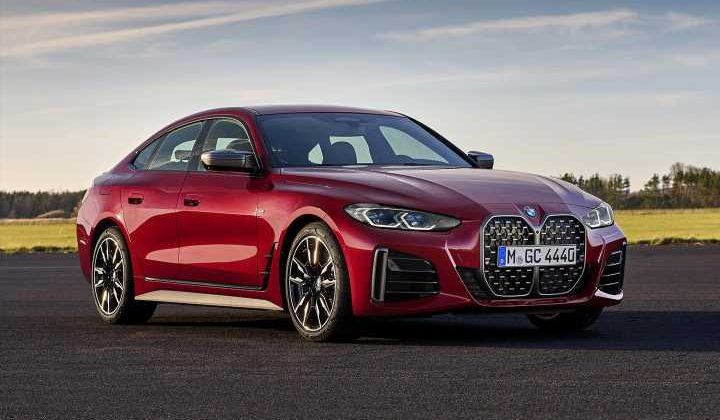 After almost a decade of sales and a wide assortment of models – 2, 4, 6 and 8 Series, for those not keeping tab – the Gran Coupe has established itself has another successful niche in the BMW range. For the most part, it isn’t hard to see why: take the best bits of a hatch or saloon base (usually the practical ones), inject some coupe style and dynamism, charge a bit more money and, bingo, a BMW Gran Coupe.

This is the second generation of 4 Series Gran Coupe, a car BMW describes as “combining sporting elegance with driving pleasure and, with five full-size seats, a roomy cabin and a versatile luggage area”. In fact, it goes as far to say that this new GC “represents modern functionality that is hard to emulate.”

To that end, this is rather more than 3 Series with the big grilles affixed or a mild update of the old four-door 4 Series. It’s much larger, for starters, this Gran Coupe coming in a substantial 143mm longer, 27mm wider and 53mm taller than the previous model; that means a length of 4,783mm, a width of 1,852mm and a height of 1,442mm, and in turn improvements for rear headroom, legroom and boot space (the latter now 470 litres). Interestingly, too, this Gran Coupe has a longer wheelbase and wider tracks than the 3 Series from which it is derived, which ought to benefit handling. Give what an impressive showing the two-door 4 Series has already made, there seems little reason to doubt the transfer to Gran Coupe, though it isn’t clear yet how much heavier this car will be.

The engine range mirrors that already seen in the 4 Series, with 420i and 430i four-cylinder petrols and a 420d diesel. Topping the range for now (assuming an M4 Gran Coupe might still be a possibility) will be an M440i xDrive, powered by the familiar turbocharged straight-six “developed with the racetrack expertise of BMW M GmbH”. With the same 374hp and 369lb ft as seen in other installations, the engine should deliver 4.7 seconds to 62mph in this latest Gran Coupe. BMW also reckons that 35mpg should be possible.

The M440i gets a raft of upgrades, like the other M40i cars, to distinguish from the rest of the line-up. Those include the M Adaptive Suspension optional elsewhere, M Sport brakes with “excellent performance and intuitive feel”, a locking rear differential and a sports exhaust. Those who feel short changed by that offering will be pleased to know that a range of M Performance Parts will also be available for the M440i, and indeed the rest of the 4 Series Gran Coupe range.

Marking out the flagship cosmetically are a range of accents recognisable from other M Performance BMWs. Note the front bumper “with the signature U-shaped graphic of BMW M models”, a subtle rear spoiler and the Cerium Grey used for kidney grille surrounds, badges and mirror caps. Not the anyone will talk about those when it comes to the looks of another BMW 4 Series…

The rest is as you might expect: a plethora of new safety kit (so much so that BMW says only that “around 40” automated assistance functions can be fitted), Amazon Alexa compatibility through the BMW app, a digital key that uses your iPhone to open the car even the BMW IPA. Which is not an India Pale Ale, sadly, but an Intelligent Personal Assistant, now with extended functions. Plus over-the-air Remote Software Upgrades, Active Cruise Control with Stop&Go, BMW Maps with Connected Parking… and Parking Assistant Plus to help get the car in the space it’s just found for you. Should the driver wish, the new 4 Series Gran Coupe sounds like it can do an awful lot of the heavy lifting for them.

But let’s not be too despondent; if the Gran Coupe is anything like the two-door coupe, this 4 Series is going to be a pretty damn good in flagship M440i xDrive format. The model was perceived to be “a sweetly judged driver’s car that feels at home pretty much everywhere” last year, and how much difference can two doors really make? The 4 Series Gran Coupe is available to order now, priced from £40k for the 420i and with deliveries due in November. The M440i xDrive kicks off at £54,670. Or exactly £675 more than an Audi S5 Sportback costs. Coincidence? Not on your nelly…