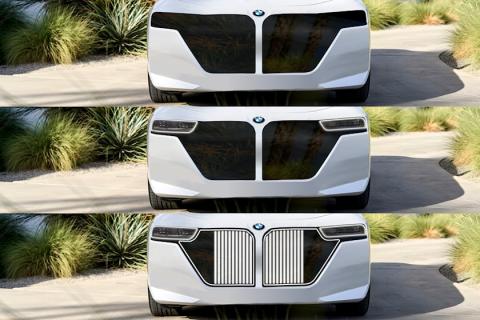 It will give designers the chance to come up with distinctive DRL designs for each model.

According to reports, BMW has invented a new front fascia which integrates the grille and the headlamps behind one seamless panel. The headlights will further come with active lenses, which, when switched on, will become visible through the panel.

Reports state that instead of having the front grille panel & the headlights under separate units, BMW could cover the entire front end in a single smooth panel. The LED DRLs and the headlights will be behind the panel, which can be switched from opaque to transparent whenever required. The new front panel is currently in its patent stage, which, if entered into production, could debut on BMW’s next-generation EVs.

With EVs not requiring an air intake, unlike their IC-engine-powered counterparts, the front kidney grille on BMW EVs is purely to retain the brand’s identity. Hence, BMW engineers are said to be proposing a multi-layer panel to carry both the signature of an EV while also displaying different interpretations of the kidney grille, based on the model. This will also allow the headlights to be positioned behind a protective screen, reducing the chances of damage to its high-tech laser light emitters.

Also, as seen from the patent sketches, BMW designers will be able to create separately-illuminated grille shapes while incorporating different accents to help differentiate the models and trims. It will also give designers the chance to come up with distinctive DRL designs for each model.