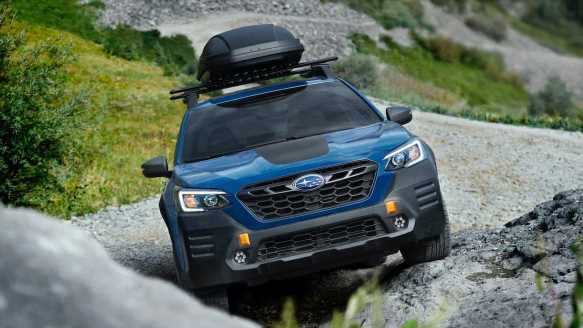 Subaru knows what its customers want, and once again it has delivered. No, dogs aren’t yet available as a factory accessory, though the automaker sets up adoption drives. We’re talking about selling adventure, and the 2022 Subaru Outback Wilderness is the most rugged and capable Outback to date. Subaru is aiming for better off-road competence without impinging on a comfortable ride on pavement. And if this seems ambitious for what seems like a station wagon, keep in mind: The Outback is more or less an SUV, qualifying as such for MotorTrend’s SUV of the Year competition (and cleaning up in our midsize SUV rankings) by way of its roominess, already substantial ground clearance, and sure-footed all-wheel drive.

The Outback Wilderness is not only about beefier looks and bashing rocks; it adds plenty of hardware that targets the growing overlanding community, making it easier to head to the trails and camp out straight from the factory. Of course, the Subaru remains a car-based creation, so it’s best to think of the Wilderness as closer to a competitor to the Toyota RAV4 Adventure or TRD Off-Road, which are more proficient than their regular models but not as capable as a 4×4 rock-crawler such as a Jeep Wrangler.

Perhaps the most important addition to the Outback Wilderness is a 0.8-inch suspension lift, which raises the SUV/wagon’s ground clearance to 9.5 inches. Subaru tells us the Wilderness’s shocks and springs have been tuned to improve stability on the trail without losing the pleasant ride on concrete. To wit, instead of 18-inch wheels, Wilderness models ride on 17-inch black alloys wrapped around meatier Yokohama Geolandar all-terrain tires, which provide better traction on treacherous terrain. All models also get a full-size spare tire mounted under the cargo area.

The suspension lift allows the rugged Outback to go places where its siblings can’t. The approach angle has increased from 18.6 to 20.0 degrees, breakover angle (what kind of hump the two axles can straddle) rises from 19.4 to 21.2 degrees, and departure angle increments from 21.7 to 23.6 degrees. Subaru engineers also widened the front and rear tracks by 0.2 inches, helping both the Outback’s handling and its stance.

In case that’s not enough, the Outback Wilderness comes standard with a front skid plate, but Subaru will offer three other skid plates—a larger one in the front, one that runs along the middle, and one for the gas tank—as a dealer-installed option; while similar upgrades are already available, the Wilderness’s extra off-road promise makes for a better reason to buy them.

The Outback’s available turbocharged 2.4-liter four-cylinder engine is the only choice for Outback Wilderness buyers. It makes the same 260 hp and 277 lb-ft of torque here as in other Outback applications, though the continuously variable automatic transmission (CVT) it comes paired with now sports a final-drive ratio of 4.44:1 instead of lesser variants 4.11:1 ratio. There also are paddle shifters poking out from behind the steering wheel that allow the driver manual control over eight pre-set ratios that mimic gears.

Curious about that final-drive ratio? A numerically higher ratio translates to shorter gearing, meaning the new setup helps the Wilderness climb steep hills better and should result in quicker acceleration, as well. As in other Subarus, “X-Mode” (a special off-road drive mode) offers driver-selectable Snow/Dirt and Deep Snow/Mud settings. However, in the Outback Wilderness X-Mode goes further by allowing the vehicle to switch automatically from low-speed managed driving to speeds over 25 mph without interrupting power or performance. In lesser Subies, X-Mode’s primary off-road settings fall away at higher speeds and must be manually reactivated.

Subaru says its lifted SUV can climb a 40 percent grade. During the unveil, we witnessed the Outback Wilderness come up a steep hill making use of its off-road goodies. Traction controls and the anti-lock braking system were also recalibrated to allow the Wilderness to get through difficult terrain with less interference.

Like you can see in these pictures, the Outback Wilderness not only looks more macho than a regular Outback, but it also adds unique details. For starters, the front and rear bumpers are all-new, as is the grille. The wheel arch claddings are much more pronounced, and designers replaced all the typically chrome detailing with a matte-black trim, which can be seen on the window framing and the door mirror caps. New six-LED fog lights are exclusive to the Wilderness, as is the black decal on the hood. Of course, the Anodized Copper trim seen throughout the exterior will help identify this as a special model, in case the overall rugged look or Wilderness logos don’t convince you.

In place of the normal Outback’s adjustable roof rack, the Wilderness gets a fixed rack with a 700-pound load capacity, which should be plenty to support rooftop tents and sleepy campers. The new model also debuts a new Subaru color—Geyser Blue (pictured here)—which is exclusive to the Wilderness.

Inside, you’ll notice touches of the Anodized Copper trim on the steering wheel, instrument cluster, and shifter, plus copper contrast stitching on the seats, door panels, dashboard, and center console. Just like outside, all the cabin’s chrome pieces save for the door handles have been replaced by matte-black finishes. The seats are upholstered in Subaru’s StarTex water repellant leatherette, which feels premium, looks cool, and is practically kid- and dog-proof. The Wilderness logo is embossed in the headrests and the standard all-weather floor mats.

All Outback Wildernesses come with the huge 11.6-inch infotainment system available on lesser models, and the setup has been recently updated and is now easier to operate. Apple CarPlay and Android Auto are standard. Drivers will be able to see their wagon’s roll angle real-time on the instrument cluster display, something that’s also unique to the Wilderness model.

All Outback Wilderness will arrive in a single spec, with the only major optional extra being a package that includes navigation, a sunroof, and reverse automated emergency braking (Subaru’s EyeSight active safety features, which include forward collision warning and automated emergency braking, are standard). Like you’d expect, there will be plenty of adventure-ready accessories available.

The 2022 Subaru Outback Wilderness will reach U.S. dealers in late spring. Its pricing will be revealed closer to its on-sale date, but expect it to fall between the Outback’s existing Onyx and Touring trims, which should put the MSRP in the ballpark of $38,000.

Subaru hasn’t confirmed whether the Wilderness sub-brand will expand to other SUVs, but we expect to see a Forester Wilderness and Crosstrek Wilderness with similar upgrades in the not-so-distant future.