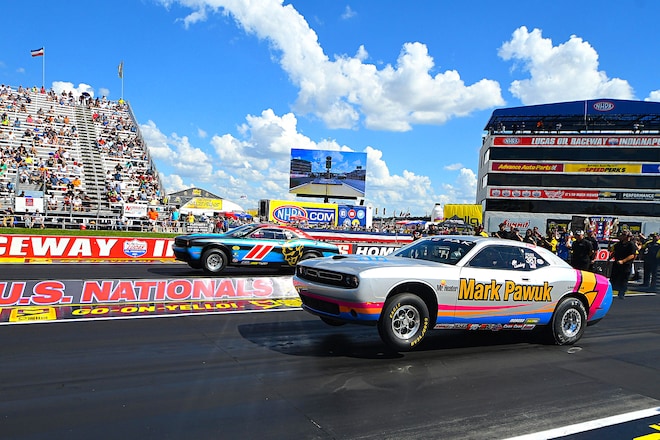 It was just month ago that Pritchett  and fellow Drag Pak driver and Don Schumacher Racing (DSR) teammate Mark Pawuk cleaned house in the FSS class during the Chevrolet Performance NHRA U.S. Nationals at Indy. Immediately following the “Big Go”, the NHRA Competition and Technical Departments threw more bulk on the Challenger Drag Paks and took some weight off the COPO Camaro and Cobra Jet Mustang to create parity among the manufacturers. 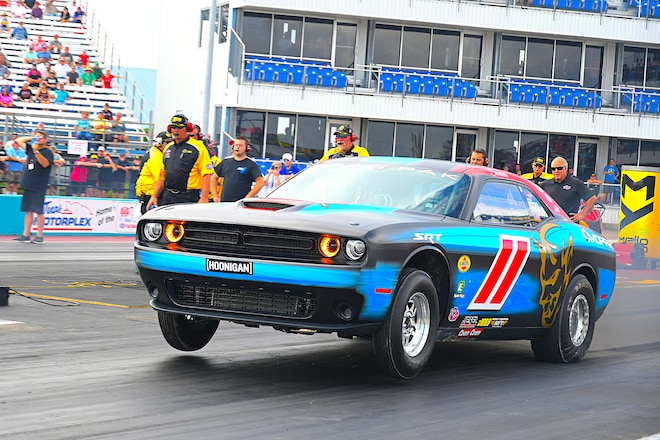 Even though Pritchett was hot off her Factory Stock Showdown victories at the NHRA U.S. Nationals and the NHRA Midwest Nationals, she knew there was a target on her back. She might have been the first NHRA Factory Stock Showdown driver to make a pass in the seven-second range, but she and the team had their work cut out for them during the final FSS race. During the NHRA FallNationals, she had qualified her Dodge to the No. 10 spot after two sessions. Looking to improve, crew chief, Kevin Helms made some adjustments, but the third and final qualifying session was cancelled due to violent thunderstorms rolling across the landscape of the Lonestar state.

With Pritchett and her Dodge going into the last FSS race of 2018, the fulltime Top Fuel star knew it would be a battle. In the FSS points chase, she was trailing a pair of COPO Camaros driven by Stephen Bell and Arthur Kohn, both with 328 to her 327. Pritchett would need to advance one round further than the COPO drivers and it was inevitable she would face one or both of them during eliminations at the NHRA FallNationals. 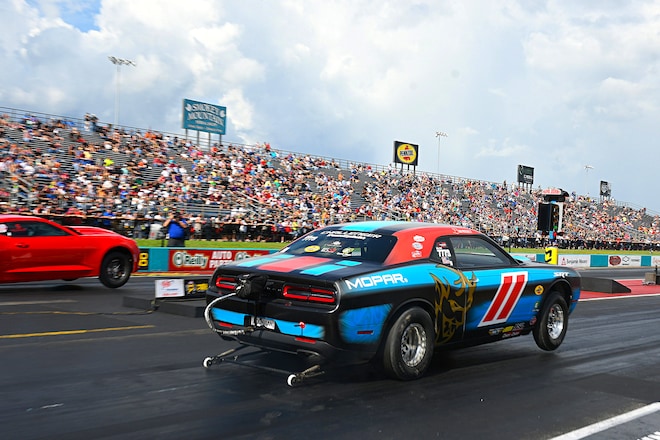 Pritchett’s supercharged HEMI Drag Pak would advance to the quarterfinals as Randy Taylor’s COPO Camaro had staging issues, rolled the beams, and handed the win to the Drag Pak. That didn’t stop Pritchett from making a stout run of 8.106 but she didn’t run it out the back door, clicking the Challenger off well before the stripe and ranning 152 mph. This would then set up a dramatic semifinal match up with the co-point leader Stephen Bell. With Pritchett trailing by a single point, she lined-up against Bell and took an immediate starting line advantage with a 0.038-second reaction time. The Drag Pak crossed the finished line first with a 8.107-second run at 169.00 mph to the COPO’s struggling 9.65-second pass at 101.23 as Bell got out the groove before half-track as the nine-inch slicks lost t 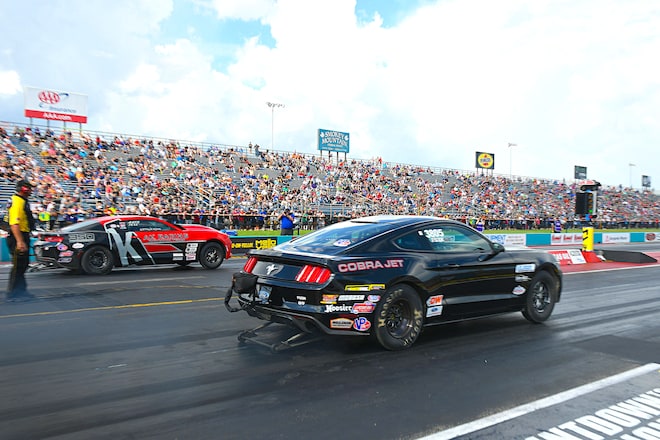 As Pritchett and Bell cleared the traps, the next pair lined-up, current FSS points leader, Arthur Kohn in another red COPO Camaro, and number-one qualifier Kevin Skinner in his sinister-looking black Cobra Jet Mustang. Kohn needed to win this round to stay in the hunt for the championship, because if he lost to Skinner, Pritchett would be the 2018 Factory Stock Showdown world champ. At flash of green, Skinner left the line first with a .027 reaction time to Kohn’s .036 light. The Mustang was ahead, but the Camaro’s blower equipped LS engine was coming on fast. When the top end scoreboards lit up, both cars ran identical 8.13-second times, but it was the Mustang that got the win light due to Skinner’s baby holeshot, despite the Camaro running 168 mph on the top end to the Cobra Jet’s 166 mph. Talk about close: the margin of victory was 0.0023-seconds which is approximately just seven inches.

Never in the history of drag racing has the Mopar crowd cheered this much for a Ford to win. 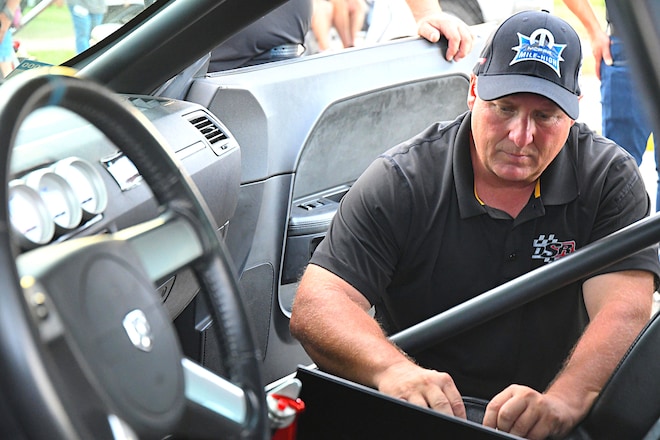 With Factory Stock Showdown world championship declared, the celebration was quick for Pritchett as she had still the final round against Skinner to get ready for. After her semifinal run, Pritchett’s Drag Pak had just cleared the scales and mandated NHRA fuel check, when out of nowhere the car began belching black smoke from the exhaust and would barely stay running on the return road. Once again, Kevin Helms and SRT Engineer Mike Rossey jumped into action and began to diagnose, isolate, and correct the problem. In the end, the problem was due to low voltage from a bad battery.

Sometimes it’s the simple things that can trip you up. 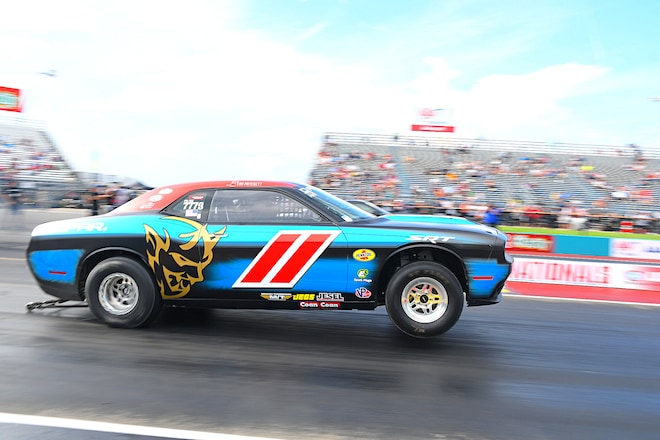 In the final round, Pritchett chose the right lane and was driving like the FSS world title was on the line even though it wasn’t; the championship Wally was already tucked away in the team trailer. Her Challenger Drag Pak blasted off the starting line with a stout 8.106-second pass at 169.02 mph to Skinner’s out-of-shape 9.697-second effort. This would be Pritchett’s third consecutive victory in the highly competitive and contentious Factory Stock Showdown series. 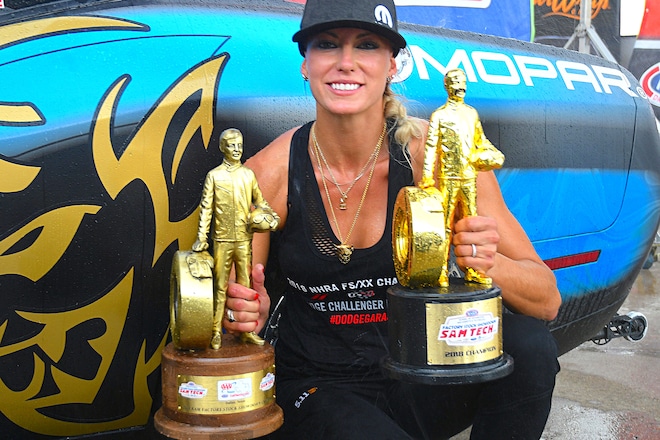 “This championship ranks at the top of the list,” said Pritchett. “I might be holding this Wally right now, but 100% this is Dodge, Mopar, Pennzoil, and the technology they pour into this class. I just get to drive the car. For Kevin Helms, Terry Snyder, all of Don Schumacher Racing, powered by Pennzoil of course, this is absolutely incredible. We came in with a chance to win the championship, but our mentality was one round, one burnout, one line at a time, and that’s what it took, so thank you to everyone that made this happen. I know I probably speak for the whole class, but a huge thank you to SAM Tech for sponsoring the Factory Stock Showdown Series. It’s really become one of the most exciting, grassroots classes out here.  I get to hold it, but this Wally is definitely going home to Mopar.” 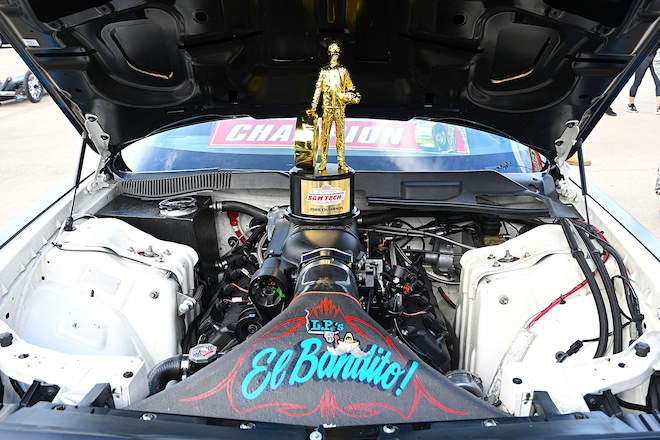 The NHRA season won’t conclude until the World Finals at Pomona in November, but the seven Factory Stock Showdown events are in the record books. The Dodge Boys, and Girl, should be mighty proud of their achievements. They’ve now added another championship to the HEMI engine’s ever-growing list of drag racing achievements. For the Chevy and Ford teams, they’ll spend the winter in the dyno cells and testing on the drag strips of the south east, constantly reengineering and refining their weapons. The NHRA rules committee will also look at all the run data they’ve collected from all three brands this year and decide if more changes are needed. With the 2019 SAM Tech NHRA Factory Stock Showdown season opener scheduled during the National Hot Rod Association’s legendary Gatornationals in Gainesville, Florida, the competition will once again be fierce and hotly contested. But for Leah Pritchett, Don Schumacher Racing, and the engineers at SRT, they’ll be ready for whatever the Bowtie brigade and Blue Oval camp throw at them.