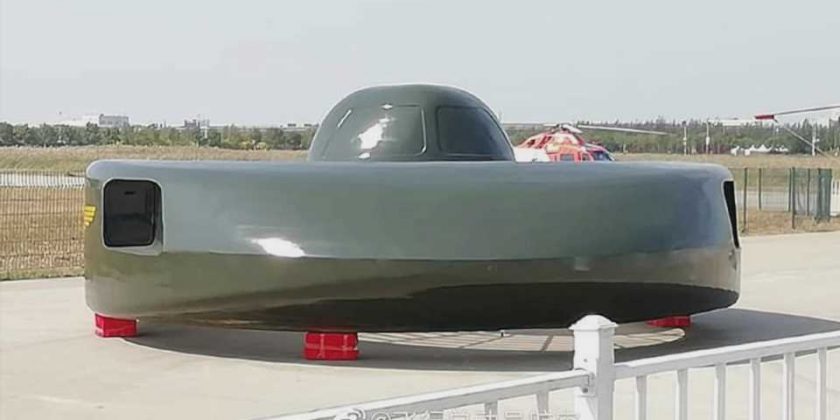 Images have emerged online of a what may be a mockup of an unusual-looking circular “armed helicopter” ahead of the opening of a major helicopter exposition in China. This is not the first flying saucer-esque design to have appeared over the years and the Chinese are likely to face many of the same hurdles that these earlier aircraft faced in making the concept viable, especially in any sort of actual combat environment. Still, it does seem to reflect a broader and still-growing trend in advanced and novel aircraft design within China.

The rotorcraft concept, called the “Super Great White Shark,” is about to go on display at the fifth China Helicopter Exposition, which formally opens in Tianjin, China on Oct. 10, 2019. The state-owned Aviation Industry Corporation of China (AVIC) has its main industrial base of operations for helicopter development and production in Tianjin. It’s not clear which of AVIC’s helicopter-producing divisions may be responsible for the development of the Super Great White Shark.

A crude translation of the placard next to the Super Great White Shark reads as follows:

“[The] Super Great White Shark armed helicopter is a composite wing-body fusion high-speed helicopter configuration designed for the future digital information battlefield. In the initial stage of its design, it refers to the international excellent and mature helicopter design technologies, such as AH-64 Apache, CH-53 Sea Stallion, and Russian Ka-52, Mi-26. While absorbing their respective advantages, it adopts the internationally popular wing-body fusion (BWB) [blended wing body] design and the former. A new type of high-speed helicopter with [a] conceptual design of propeller blades has been successfully applied in helicopter design.”

It’s not at all clear what this particular design might have to do with the other helicopters listed, only two of which are “armed helicopters” as the Super Great White Shark purports to be. The assertion that this is a “blended wing body” design, a type of aircraft planform that you can read about more in this past War Zone piece, is also not reflected in what is on display. The Super Great White Shark does appear to be aiming for some form of circular wing design, but its tall, largely vertical ring calls into question how much actual lift the main body would generate in flight.

It’s also not immediately apparent how the aircraft, which features a centrally-mounted cockpit that appears to offer space for at least two individuals to sit side-by-side, is supposed to work, at all. One of the available pictures does appear to show that the majority of the top of the main fuselage is open, implying that the center portion is simply a large lift fan. This would fit with the technical specifications on the placard that say it has a “main rotor” that is just over 16 feet in diameter.

The Super Great White Shark concept, with what appears to be its largely open top just barely visible at left.

The Super Great White Shark model has two sets of air intakes and exhausts positioned laterally for what would likely be jet engines providing forward thrust. They might also supply power in some fashion to drive the main lift fan in the vertical takeoff and landing mode.

Another image showing that there are in-line intakes and exhausts for laterally mounted engines.

As noted, this is certainly not the first circular wing aircraft design. During World War II, U.S. aircraft manufacturer Vought notably experimented with propeller-driven designs, including the V-173 Flying Pancake. The U.S. Navy even tested an experimental circular wing fighter get, the XF5U-1, more commonly known as the Flying Flapjack for its unusual shape. However, these aircraft typically featured very thin wings that were intended to generate significant amounts of lift, unlike the present design of the Super Great White Shark, and were expected to function otherwise as traditional aircraft.

In the late 1950s and early 1960s, the U.S. Air Force and Army began experimenting with new types of vertical takeoff and landing aircraft, including circular flying platforms and rotorcraft with large central lift fans and more complex flying saucer-like designs. Among the most notable of these was the Avro Canada VZ-9 Avrocar, which used three centrally mounted jet engines to blow air through vents all around its circular edge to create lift by exploiting the Coandă effect. These vents could then be angled to provide forward thrust. An additional central lift fan gave the craft the ability to take off and land vertically.

A cutaway diagram of the VZ-9’s internal configuration.

Flying saucer concepts have continued to be a subject of interest among aircraft designs, large and small, since then, but have, so far, yielded little in the way of practical flying machines, at least that we know of. Development of the Moller M200G Volantor, which designer Paul Moller pitched as a personal flying saucer for civilian use and that received a certain amount of media attention in the 2000s, has led to more refined models and other “flying car” projects, but no real sales.

Earlier this year, Romanian engineers demonstrated what they are calling an All-DIrectional Flying Object, or ADIFO, which features rear-mounted engines for forward thrust and uses blown air through side- and top-mounted vents for vertical and lateral control. So far, this is only a subscale model, though.

The biggest problem that circular vertical takeoff and landing aircraft have faced in the past is generating sufficient lift to bring them to any significant altitude and then keeping them stable once they are in forward flight. Avro Canada, for instance, had claimed that the VZ-9 would be able to reach 10,000 feet and have a top speed of 225 knots. The prototypes never made it more than three feet off the ground or flew faster than 30 knots, effectively making the extremely complicated hovercraft. The M200G Volantor is also designed to prevent the operator from flying above 10 feet and reportedly cannot get above 15 feet, at most.

The placard for the Super Great White Shark claims that the final design could reach altitudes of just under 19,700 feet and have a top speed of around 350 knots. These claims seem questionable, at best, given existing examples of similar craft.

Using an advanced lift fan system, such an annular-ducted fan, might provide additional efficiency in different flight regimes to improve performance and stability at low speeds, such as taking off and landing, and at high speeds during level flight. Making such a configuration work reliably in a design of this size, including in hot-and-high conditions, could prove challenging, though a modern fly-by-wire flight control system could potentially help manage the aircraft’s stability.

It is also possible that the Super Great White Shark could evolve into some sort of advanced, high-speed, wing-in-ground-effect style vehicle. This could offer rapid mobility over various terrain types closer to the ground that could be valuable for certain missions, such as reconnaissance or short-notice raids, possibly in support of special operations forces. Depending on its range, it could also be valuable for patrolling litoral areas, including around China’s man-made islands in the South China Sea.

Whether or not the Super Great White Shark ever flies at any height, or meets the existing performance claims if it does, it certainly demonstrates that China is looking forward to a potentially new generation of helicopters or other rotorcraft. The U.S. military, among others, is also deep in a number of programs that are also looking into advanced, high-speed compound helicopter and tilt-rotor concepts to replace a wide array of existing traditional helicopters.

Concerns about whether or not traditional helicopters will be viable over future battlefields full of advanced air defenses and other threats have been driving these efforts, most notably the U.S. Army’s overarching Future Vertical Lift (FVL) program and its offshoots. China’s People’s Liberation Army is no doubt having similar internal discussions based on its own analysis of emerging battlefield trends.

We have already seen the Chinese pour significant amounts of time and effort into the development of advanced aircraft and other weapon systems. The explosion of stealthy drone concepts from China’s state aviation industry has been particularly notable. The military parade to mark the 70th anniversary of the founding of Communist state on Oct. 1, 2019, highlighted progress toward a true unmanned combat air vehicle (UCAV) and supersonic unmanned aerial reconnaissance capabilities, along with other major developments, such as hypersonic boost-glide vehicles, unmanned underwater vehicles, and more.

When the China Helicopter Exposition formally opens tomorrow, we may learn more about the Super Great White Shark, how it is supposed to function, and what China claims it can do. In the end, it may turn out to just the first of a number of advanced rotorcraft concepts that begin to emerge as the Chinese look toward the future of their own vertical lift capabilities.

A cutaway diagram of the Super Great White Shark has emerged that confirms much of The War Zone’s initial analysis of the general configuration. Other reports indicate that it has two sets of main fan blades, each with its own power source inside the fuselage. Questions remain about how the aircraft might attempt to overcome the hurdles that similar designs have faced on the past, including the drag that would arise from the large open lift fan.

In addition, the artwork shows a three-point landing gear system not see on the example on display in Tianjin. The concept art also indicates that the Super Great White Shark’s armament might include a 20mm automatic cannon, as well as air-to-ground precision-guided munitions and air-to-air missiles.

A better side view of the Super Great White Shark concept.