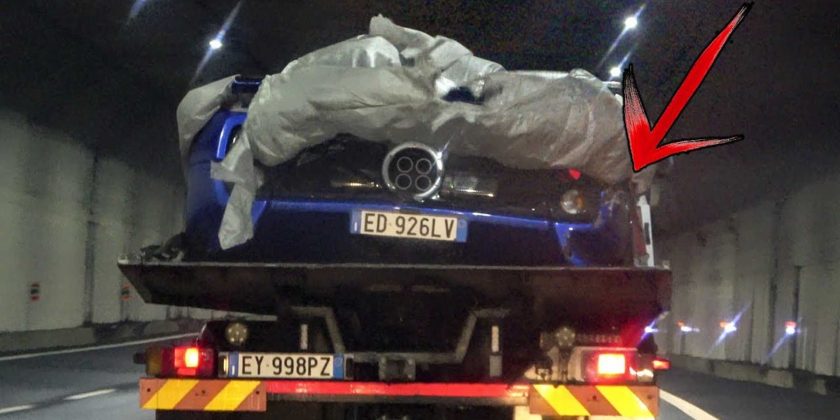 They’re all special, but this one is more special than most.

Any supercar with obvious battle damage makes for a sad day, but we’ll open this article with a dose of optimism. First of all, the damage on this Pagani Zonda doesn’t seem that bad, though admittedly this video from Varryx doesn’t give us the greatest look. Second, Pagani has a solid track record of not just repairing, but upgrading damaged cars in the process. And this isn’t just any Zonda, if such a thing exists. More on that in a bit.

The video reportedly comes from Italy, where this rollback was spotted with something blue and exotic strapped down beneath a flapping tarp. A dark, wet highway makes it difficult to suss out details, but we can at least tell it’s a Zonda. However, once the truck enters a lit tunnel, we can see it’s a Zonda S with at least some damage visible on the right rear. Paint is blasted off the rear fascia and it’s sitting noticeably lower on that side, suggesting the tire is flat at the very least. At worst the wheel could be damaged and that would indeed be very tragic. Here’s why.

The video doesn’t offer details on this particular Zonda S, but folks who visited the Pagani Museum in Modena over the last couple of years may recognize that number plate. This is a 2003 Zonda S, specifically chassis number 20 finished in Blu Francia. We actually caught this Zonda ourselves during Motor1Days at the museum back in 2019.

As the story goes, the car was fitted with special wheels that had matching blue inserts, along with a delicious cream interior. It was originally sold to an Arab prince but Pagani ultimately bought it back, and by searching the car’s number plate on Google we’ve been able to see it was still in the museum as of last October at least. Clearly, something has happened between then and now.

Therein lies the mystery. Was this Zonda getting some exercise outside the museum and had a too-close encounter? Was there a fender bender in Pagani’s museum, resulting in damage? Did Pagani sell this iconic and very rare model to a new owner who had an unfortunate mishap? If it was still in Pagani’s possession, strapping it to the back of a wrecker under a makeshift tarp whipping in the breeze seems very pedestrian. Then again, this could’ve been the preferable solution as opposed to leaving it where it was damaged until better transportation could be sourced.

Ultimately, this encounter leaves us with more questions than answers, especially given the car’s history and rarity. Hopefully it comes back to life good-as-new, or even better.