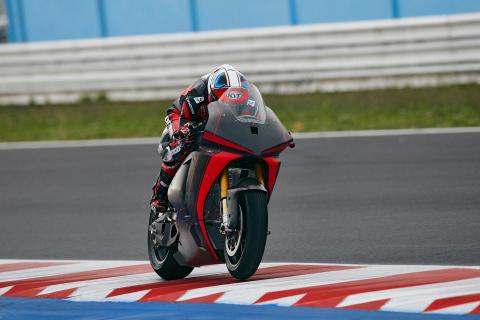 The prototype of the Ducati MotoE electric race bike has been codenamed “V21L”.

The Ducati MotoE electric race bike reaches the track for the first time. The high-performance motorcycle has been ridden by Michele Pirro, official Ducati rider and test rider, at the Misano World Circuit Marco Simoncelli.

The prototype of the Ducati MotoE electric race bike has been codenamed “V21L”. The machine has been co-developed by the Ducati Corse team and the Ducati R&D engineers. The most important challenges that emerged during the development process include the size, weight and range of the batteries.

Apart from focusing on delivering better performance, weight reduction and consistent power delivery – Ducati has also paid attention to the development of a suitable cooling system.

Earlier this year, Ducati had signed an agreement with Dorna Sports and became the sole supplier of electric race motorcycles for the FIM Enel MotoE World Cup from 2023.

Currently, Energica’s Ego Corsa race bike is being used by all the teams. The manufacturer of high-performance electric motorcycles will not renew its partnership with Dorna Sports. Its 4-year contract ends in 2022.